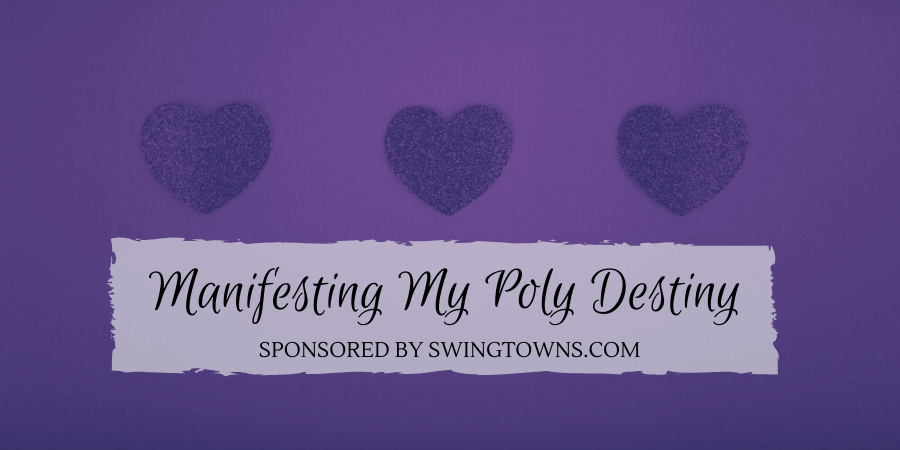 John Brownstone and I often joke that yes, we’re non-monogamous, but he’s poly in practice while I’m poly in theory. Meeting people, getting to know them, making a connection — I find all of that really difficult. A lot of that has to do with my own social anxiety but I also have mile-high, mile-thick protective walls around myself (figuratively, of course — a literal wall would make life very difficult).

But you never meet anyone if you never talk to new people. Which, frankly, fills me with dread. Give me a microphone and/or a camera, and I’ll talk until your ears bleed. I’ll even be cheerful and nice. But talking to someone on my own? One-on-one? I’m currently cringing inside just thinking about it.

At the same time, John Brownstone and I have had a few conversations lately where we (mostly I) admit we miss the fun and excitement of new relationship energy (NRE). I’ve almost forgotten the breathless anticipation of waiting for a text back or getting that early morning “I’m thinking of you” message. For those who are strictly monogamous, you might wonder how I could possibly miss that when I have someone as wonderful as John Brownstone.

I love everything I have with him. I’ll take every shitty, crappy minute with him over five minutes of a good day without him, any fucking day. But one of the (many) burgeoning feelings I’m starting to grapple with is that one partner can’t possibly fulfill every need. Ironically, I’ve learned most of this by watching him navigate his own poly life. We always come back to each other, and we’re always the others’ first in life and love. But…

I know I have needs I’m not capable of naming yet — I feel them pressing in, just under the surface. To avoid dealing with them, I allow myself to stay very, very busy. (For the record, avoiding my own feelings and thoughts isn’t my main reason for staying busy. It’s a feature, though, not a bug.)

But I also know who I am. I have to be pursued, caught (in a consensual way), and wooed. Not because I’m too fucking precious. Mostly because, underneath it all, I’m still that anxious 19 year old who can’t understand why anyone finds her attractive. (Which, btw, is how you find yourself married to the worst possible person for you and don’t leave until 12 years later — because you don’t know you can do better, and you’re too afraid to find out what the alternative might be.)

In relationships, I want to feel submissive. I want to be with a person who manages to bring out some level of submission in me. It’s a sign of trust and a sign of lust. If I do what you say without thinking about it (which, yes, is clearly dangerous in the wrong hands), that’s powerful — on a few levels. And I like that feeling.

When Swingtowns asked to partner up and suggested I give their site a try and share what I thought, I only hesitated for a moment. Signing up for yet another new thing and creating yet another new profile always makes me hesitate. But also, this could be an opportunity. I don’t have any expectation of meeting someone through the site — although it’s certainly possible. And while I don’t believe that you can just manifest a destiny, I also think putting your intentions into the world — and into practice — helps.

So here I am, signing up for Swingtowns — a site for kinksters, swingers, poly folk, couples, singles, polycules, people of all genders and sexualities — to see what happens. (Side note: I have no doubt that part of what will happen is that I’ll get dozens of scintillating messages like, “Hey.” Because this is the internet.)

Basic membership to Swingtowns is free (and I’m all about free). For access to more features, matches, etc, you can pay a monthly membership fee. At the time of publication, it’s $16.99 a month or $33.99 for three months. Note: I got my first “like” on my profile and can’t see who likes me without paying for membership. Make of that what you will.

When you sign up, you select whether you’re single, a couple, a polycule, or a group (like an organization, club, or business). I think John Brownstone signed us up a million years ago as a couple. This time, I went for “single” to see what happened.

I’m sharing screenshots so you can see for yourself how inclusive sign up is but to my cis, mostly hetero (I think? I don’t know? I’m very confused) self, it seemed to be.

Step 1: Create user name and password. I was able to be Kayla Lords there (which I always appreciate when I can grab my name because…branding!)

Step 2: Choose your status. I went with single for this experiment. The screenshot below shows what it looks like if you choose “couple” — you enter the information for each partner (which is what I originally did before changing my mind). The fields for “Partner 1” in the example below are the same if you’re single. Choose your gender, orientation, body type, and height. You can also choose your location — which makes sense if you want to actually meet someone local. 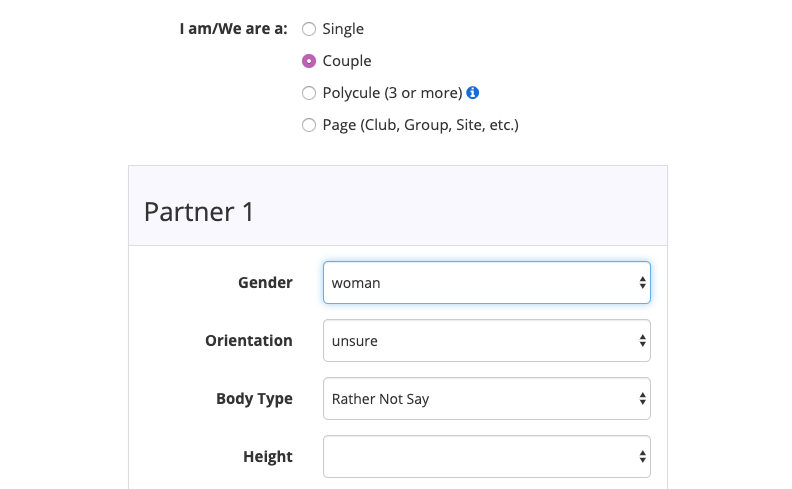 These are your options for gender: 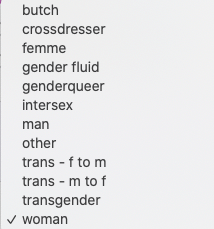 These are options for orientation:

Note: I chose “unsure” because I know (think) I’m not fully straight, but am I heteroflexible, bicurious, bisituational, bisexual?? I have no idea.

Step 3: Select what kind of non-monogamy you want. I chose poly: looking for friendships and emotional connection that may evolve into sex later. I liked how succinct that option was because it fit me so well. But I also appreciated the “other” option for people who don’t fit into any of the defined categories.

Step 4: Select who you would like to contact you. This one felt the most fraught to me. If I chose too narrowly was I eliminating great people? If I chose too broadly was I setting an unfair expectation for people contacting me? I kind of went down the middle in most categories because I have no idea who I’d want to meet. Maybe I’m old-fashioned but I like the idea of unexpected meetings with people who don’t fit our preconceived notions of who we might be attracted to. John Brownstone fit none of my “types” and look at how that turned out. Us getting to know each other online was random — and I like that randomness. 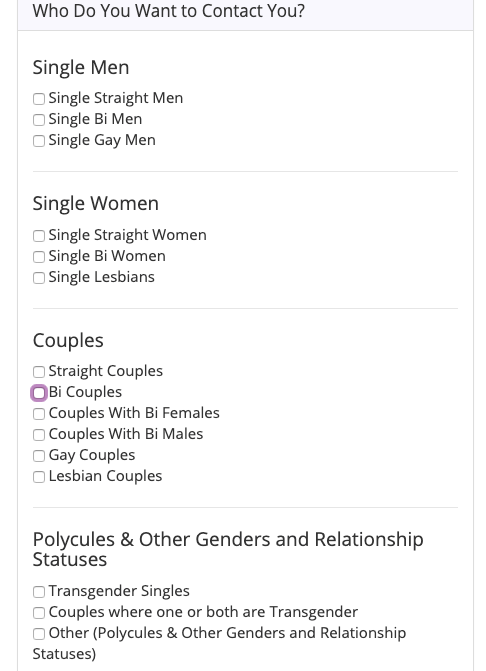 Step 5: Write a brief introduction. I wrote the same thing I always write — I’m a submissive babygirl masochist with a sadistic Daddy Dom, and we’re 24/7, but I let myself get slightly vulnerable and share that I’m looking for a genuine connection with someone before declaring friendship OR getting naked together. I won’t pretend to be anyone other than who I am — always better to be upfront and let people decide based on reality.

Okay, so I’m signed up, now what? Now it turns into both a lurker’s paradise and a socially anxious person’s nightmare (because life is complicated). After signing up, I could immediately look through profiles, find groups, follow pages, and find who was nearby.

I clicked around but I know me. I won’t approach anyone. They’ll have to come to me. Yes, I know that sounds egotistical, but such is the life of a person who doesn’t enjoy peopling.

Now, though, I wait. It didn’t take long for the first “like” to come through, and I don’t even have a profile image up yet. (Though by the time this post goes live, I’m sure I will.) Putting my picture up makes it more real. It gives other people the ability to judge me based on my appearance. Cue the internal screaming of my former 20-something self.

It’s not just for swingers.

With a name like “Swingtowns” you’ll be forgiven for thinking it’s a site just for swingers to hook up. In fact, it’s open to swingers and kinksters, polyamorous and monogamous. I appreciate spaces where I don’t have to tone myself down or pretend to be vanilla — or even think I should “pretend” to be vanilla. As Kayla Lords, that ship has sailed. One Google search and you know the truth (and see my tits). But in my vanilla life, under my legal name, I play a constant game of make believe — letting other people imagine I’m a stereotypical mom of two. (Bwahahahahahahaha!)

What’s going to happen next? I have no idea. But I also know that if I never open myself up to possibilities, the one guarantee is that nothing will happen at all.