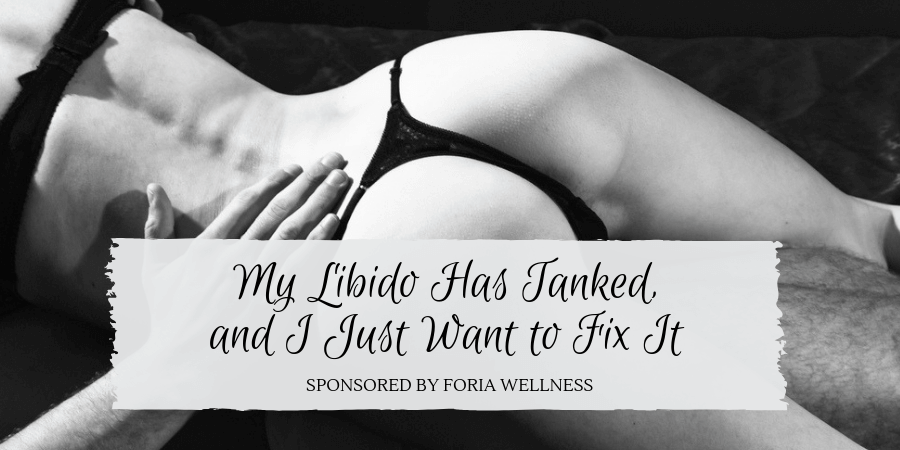 (I originally wrote this before our recent move when things were extra stressful, but we were still engaging in regular sex — unlike more recently. Yes, this languished in my draft folder until now…for reasons.)

There was a time, prior to the start of this blog, when I would have told you — with a straight face — that I had little to no desire for sex.

At age 18, I spent a glorious year or so having all the sex. I rode beautiful cocks, slurped and sucked bobbing, twitching cocks, and learned that I love doggy style sex best of all. But by 20, I was conflicted about my desire for sex. I became convinced that I shouldn’t have sex with my eventual husband. We needed to step back a bit. What if I was sending myself straight to hell (a place I wasn’t even sure I believed in)?

That lasted about a year. I have no idea how much he masturbated. I wasn’t the same person I am today, and it never occurred to me to ask or think about it. But I’m positive it was a lot — and I don’t blame him.

When we moved in together (I was 21), we went back to semi-regular sex. We were engaged and living together, so whatever taint of possible sin I’d previously worried about didn’t feel quite so important. It was semi-regular and…meh. I’d lost the exuberance from just a few years early, and I was barely into my 20s.

It’s only in looking back that I realized my sex drive was trying to send me a message at age 20 that I didn’t actually figure out until age 31. Stop! Turn around now! You should not be together. You don’t desire him, like him, want him, or even respect him.

God, that’s an awful thing to say about the biological father of your children, but there it is.

I now realize the wild sex of the early days was part New Relationship Energy (NRE) and part discovering my sexual power. I loved sex. It made me feel free and untamed, as if I was breaking all the rules. Which, by the standards I’d been taught — abstinence only sex ed, religion, “good girls don’t do that” — I guess I was.

But once my desire for this person dried up, my libido plummeted. I didn’t like him, and therefore didn’t want to have sex anymore. We did, but from my perspective, it was always to keep the peace or to get him to do something around the house. That’s right. I’m a woman who traded sexual favors with a cis, heterosexual man to get him to participate in our marriage. Yes, it’s gross, but we do it because it works. (And, no, I don’t have to do that with John Brownstone.)

Because I was so out of touch with my own sexuality and sexual desires, never having learned that you can be IN touch with them, I didn’t realize why it was happening. And once we had kids (proof we still had sex from time to time), I assumed motherhood, babies, and sleepless nights were to blame.

Now, though, I want John Brownstone. I adore him and given a few minutes of quiet can think of any number of sexy things I’d like to do with him and for him to do to me. Feeling desire again (on a regular basis) after so long still seems new and shiny. I get to fantasize about him, and I get to have sex with him too. Yay!

Another element of my lack of sexual desire, arousal, or willingness to fuck was, of course, stress. Stress fucks us in the worst possible ways — including, for so many of us, keeping me from wanting to fuck at all.

During my first marriage, I lived in a state of chronic stress. So much that I’m fairly certain my body and health are wrecked as a result. Decrease desire, increase stress, and my libido vanishes with a puff of smoke.

But it’s only now that I’m realizing that stress alone — even relatively low stress that certainly isn’t chronic — plays a part in my libido and arousal. How can I be so sure?

I can’t even bear to have him pinch my nipples or smack my ass too hard.

At this point, I’m just a sad kinky girl who wants to be fucked, forced to orgasm, and consensually hit until I consensually beg for mercy. Is that really too much to ask?

According to my libido, the answer to that is yes.

What Can I Do About It?

I clearly still desire John Brownstone. Fuck, just looking in his eyes makes me want us to be naked together. My imagination works just fine, and my fantasies have been great lately. I was turned on enough recently that I felt a familiar ache in my cunt and masturbated as soon as I came home — even though I got none of the pleasure I’d hoped for. So my libido isn’t completely gone.

The simplest answer is “get through the stress” but there will always be stress. As of the day I’m writing this, we’re a few days away from moving our entire lives to another town. That includes all the normal stress of uprooting a family with a dash of generalized and social anxiety thrown in like too many habanero peppers. Fun times.

Second, I’m going to try CBD oil for anxiety and arousal. Yes, I know, CBD oil isn’t marketed to increase arousal (as far as I know), but I’ve got new CBD lube to try: Awaken by Foria. It’s designed to turn on people with vulvas and increase sensations. According to the manufacturer, putting it on my clit, labia, and vulva about five to ten minutes before sexy fun times will help increase blood flow and (potentially) intensify arousal. (A review will definitely follow — we shall see if it helps or it’s wishful thinking.)

Third, I’m going to be patient with myself and get through this damn move. By the end of June, we’ll be kid-free for a couple of weeks. I have no doubt that John Brownstone will make all kinds of super sexy plans.

And we need some super sexy plans. For the past year (or more), our focus has been outward — our businesses, our move, our goals for the future. We’ve talked about it, and we’re ready to spend time reconnecting and focusing on our desires, wants, and needs. It’s been a long time since we explored new sexy fun together. Even with my wonky libido, I’m ready to discover new pleasures with him — and maybe even with others, too.