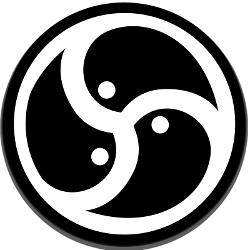 I was punched by a Dominant – two in fact – and I liked it. That just sounds harsh, doesn’t it?

I writhed on a spanking bench like some wild animal in heat. That makes it sound like it was purely sexual.

I allowed another Dominant to touch me in ways only John Brownstone ever has. And it blew all of our minds.

Daddy and I were invited to an impact play workshop at our favorite dungeon by one of our favorite kinksters. We have to say no so often that it felt surreal to say yes. His mom took the boys, and off we went.

I always get nervous before visits to the dungeon. Even when I know what to expect, or think I do, I don’t really, and I’m aware that anything can happen. At this particular dungeon, the vibe and energy are always so good – and that’s because of the Domme who owns and runs it, Master M. (Yes, she’s female and yes, she goes by Master.)

I’ve had a girl-crush on her from the moment I met her. She’s vivacious, bubbly, energetic, and best of all, she tells it like it is, holds nothing back, and loves to share her knowledge with those around her. She has an energy that speaks to me. I’ve met two maybe three people in my whole life that affect me the way she does.

Have I mentioned that she’s also a lesbian and likes curvy submissive girls?

You can see where my heart might start to pound being in her presence, especially with the big girl-crush looming.

The day of the class, Daddy asked me if I would mind being a volunteer if Master M needed to demonstrate something. I said yes, but my heart rate increased, my face grew hot, and my heart was in my throat. I desperately wanted to be her volunteer, and I desperately didn’t. The last thing I wanted was my crush to flow out and over her when it wasn’t appropriate or (worst of all) reciprocated in some way.

He sent her the message that I was a willing volunteer for the evening. She made it sound like it might not be necessary as her slave may be able to attend the workshop. A sigh of relief and a stab of disappointment, all from one text message.

Later in the evening, we received a text from her that said three of the other couples cancelled so she’d be able to give us more hands-on attention. Yeah, I squirmed, giggled, and blushed (ever the babygirl). But I also assumed this would simply be an opportunity for Daddy and I to play a little. I truly didn’t think there was much she’d teach us. Not that we know everything about impact play, but as it’s our favorite form of play, I figured our education would simply be in the details and maybe an understanding of why we do something.

By the time everyone (all four of us) were assembled, the lecture portion began. At first, my eyes glazed over and I zoned out a little – until Master M began to describe one of her favorite forms of impact – punching. (Note: do not try punching your partner just because of this damn post. We had a quick lesson in anatomy AND Master M on hand to show us where and how to do this properly.) She’s a massage therapist and is intimately familiar with the body. She’s also a sadistic Domme and enjoys dishing out pain.

The thought of punching had never occurred to Daddy or myself. It simply sounds too violent. Punching is what you do in a fight, not a scene. Right? Wrong. We learned a flat-fisted punching method that lands in the meaty, muscle portion of the body. Daddy tried it on me, and it was the perfect thuddy feeling that I prefer in impact play. I can tolerate some stinging pain, but not all. Thuds however don’t just affect my body, they quiet my mind. And frankly, they’re not as painful to me as stings are.

With Daddy’s permission (and mine, duh), Master M demonstrated different techniques on my body. Surface punches that are similar to taps. They feel good but they don’t jar the soul. Then she showed him a punch that is meant to flow through the body. And it did. My body jerked, my pussy warmed, my eyes rolled back in my head, and my mind stilled with one firm blow.

At first I kept my eyes on Daddy, my own Dominant, to lead and guide me, and for reassurance. After a punch that nearly knocked me off my feet and almost brought me to orgasm, I stared directly into her eyes, drawn to her.

She smiled and blushed before whispering, “Thank you.” Without conscious effort, I’d acknowledged her, as a woman and a Dominant, in that moment.

Moments later, I was naked from the waist down on the spanking bench. Normally, I have a thong, but not this night. The cool air kissed my lips, already moist from the earlier demonstrations. I was nervous because I’d never felt so exposed, and I knew Master M would be by to, at least, check Daddy’s technique. Even in that moment, even with the love, support, and desire of my own Daddy, I wanted to be found attractive by whoever might see me, but especially her.

What transpired sent my mind swirling.

I don’t remember exact details of who, what, or when, but I remember sensations. Light punches. Fingernails raking my body. Soothing hands – four of them. Pressure on my neck. Hands in my hair. Chuckles at every gasp, squeak, whimper, sigh, and cry.

The two of them made me feel sensations I never dreamed possible. I writhed on the bench, my hips moving, begging for something, I don’t know what. The scene quickly became less about impact and more about sensation. Two Wartenburg wheels, four fists, four smacks. Sometimes they coordinated their movements, double-teaming my body. Other times they complemented each other. One soft, the other firm. I couldn’t always tell them apart.

Everywhere they didn’t touch me, I was cold. I wanted all of them, more of them. Towards the end, I remember Master M cradling me to her body. Instead of holding myself apart, I leaned into her, basking in her warmth and closeness.

I never once felt anything but love and energy from both of them. We were three parts making a complete whole in the scene. No one person was more or less than another. It was a form of love-making that had nothing to do with romantic love, but was still very sexual and very powerful.

I went to sleep with the memories of their touch on my body. When I woke up to the familiar strokes and teasing of Daddy, I luxuriated in the moment, loving the closeness we shared. But I also missed the second set of hands. I don’t remember my dreams that night, but I know I was cocooned in the memories of what happened between us.

I don’t know what, if anything, happens now. Probably nothing. We bonded during the scene, and my hopeful heart says that maybe more opportunities will present themselves, maybe a bigger friendship will blossom between the three of us. The part of me that is both realistic and cynical (a dangerous combination) says that real life will get in the way, this will become a special memory, but I must tread carefully and not build it up in my mind as anything more than a singular moment in time.

Either way, I’m grappling with the emotions and sensations I can still feel right now, when I close my eyes. I want to laugh and cry. I want to curl up into myself and savor the memories. I want to jump on top of Daddy and relive the sexual feelings the scene produced, until we’re both spent.

I want more. With both of them. And no, I don’t know what that means, either.