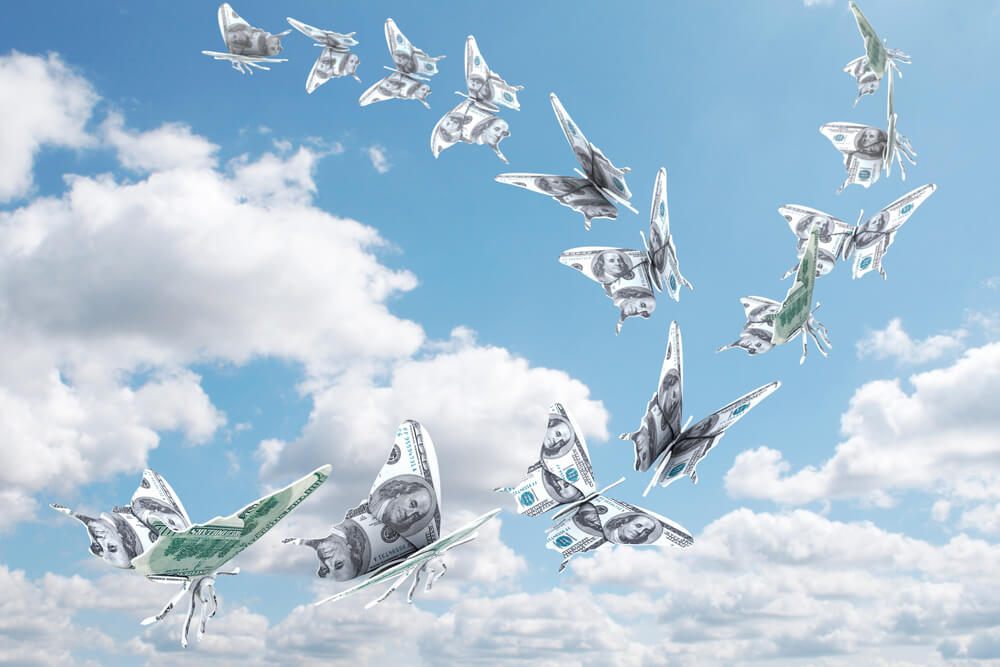 I don’t know if this is a content warning about anxiety and money or a desperate plea to not be thought of as a privileged braggart. When I started writing this piece, I thought I would explore my weird anxiety around a recent purchase of a new outfit and lingerie. Because I’m not used to spending money on myself without a damn good reason (like my wedding in 2017 — and I still did it on the cheap). This is what came pouring out.

Yes, I’m in a much better financial position than many people, but I have recent and vivid memories of the kind of financial stress that too many people face. I don’t write this to minimize other people’s current experiences. And no, I don’t espouse the “pull yourself up by your bootstraps” bullshit, either. If you’d rather not read about money anxiety when you face it yourself, I get it.

I thought I’d gotten out of the habit of shopping (or wanting to shop) a long time ago. It never has felt natural to me — to buy things because you want them, to afford things you need.

From childhood until fairly recently, I’ve been part of the working poor. We had the good fortunate to nearly always have a job. Most months we could afford out the barest essentials, but there was never room for more.

When I was 15, my mom finally got a promotion and a chance to live in a more affordable location. We were movin’ on up — and had to leave Florida and go to Mississippi to do it. To a single family brick home out of a tin-can trailer that probably should have been condemned a decade earlier. My mom finally drove a car that didn’t smoke on the side of the road at least once a week. (I’ve done the walk down the shoulder of an empty highway — pre-cell phone days. It’s not something you forget.)

I had new clothes at the start of both summer and winter, and we didn’t have to pick them out three months earlier to put them on layaway. Instead of eating out once or twice a year, we went once or twice a month. Ordering a pizza on a busy night became a new norm.

I never felt “rich” or even comfortable. My mother spent many nights trying to budget her paycheck to cover our new life. But we weren’t so poor we had to put things back at the grocery store anymore, either. (Frankly, though, learning how to navigate a grocery store down to the last penny you can afford is a skill — one she passed on to me.)

Looking back, I could tell that she and my dad both struggled to adjust to this new reality. Having more than enough to get by but not enough to live the lifestyle of their peers. Not that my dad didn’t try. I didn’t learn until after his death (when I was 22) that he’d racked up tens of thousands of dollars in credit card debt after we moved to this new life. My mom nearly crumbled under the weight of it all.

My early married life was spent much like my early childhood. We were working poor again — this time the now ex husband and myself. I remembered my mother’s budgeting “hacks.” Sliding things around so you were late but not so late something got turned off — because a reconnect fee would be impossible to pay.

I cut out cable and landlines before the cool kids did it. While pregnant with my oldest, I learned how to eat lunch at work every day for $2.10 — cheaper than if I’d bought stuff to make lunch (I did the math). As with all things surrounding being poor, I spent only a little money but it came with a shitty diet — cheese fries and sweet tea (with free refills — perks of working in a department store in a mall).

Any money spent was precious. Buying anything took a lot of thought, and I had to wait until we really needed it. The basics were truly the basics. But like many other poor people I knew, if I had $10 to get McDonalds in a month, I did it.

Why? Because it was nice to feel “normal” in the drive thru. To have the convenience of fast food. To pretend, for half a second, that this was something we could easily do. (I’m also an emotional eater, so finding an extra $10 often went to food that I used to comfort my constant state of stress.)

Slowly, but surely, with plenty of help, I managed to pull myself out of dire straits. After two years using payday loans to get by — because once you start, it’s almost impossible to stop. I’ve quit crap jobs, taken a pay cut on the hope it would yield better opportunities later, tightened my belt, and then lucked (and worked my ass off) into pay raises or better paying positions.

Inch by inch, year by year, I crawled towards slightly more financial security. Still broke, but we could buy both mustard and ketchup at the grocery store — at the same time. The stress peaked and then eased financially after my divorce. (He hadn’t worked steady in a decade which lead to so much financial stress.) I began to rely on my own judgement — imperfect as ever, but at least the decisions were mine.

Even then, I didn’t feel comfortable buying new things except for my kids. I could tear up a dollar tree at Christmas filling up stockings and finding small things I knew would make them smile. (Those tricks wouldn’t work today — they’re older and have known more luxuries.)

The stress doesn’t really go away.

The stress of never feeling like you have enough money (because you don’t) doesn’t really go away. I asked my mom, a woman who has a ridiculous amount of money for her retirement, if she ever feels completely comfortable with her wealth.

She said no. She understands on an intellectual level that she’s comfortable and doesn’t need to worry anymore. But her childhood of actual poverty and our life of financial stress have seeped into her bones. The memories of not enough, of not buying shoes or glasses when I needed them, of choosing between this thing and that at the grocery store…they’re still there. That kind of worry doesn’t completely fade away.

Today, after several years of working for myself and partnering with John Brownstone, I find myself in the financial position my parents were in after that fateful move when I was 15. Instead of a partner who takes out secret credit cards, I’m married to a man who is much better with money than I am and also better able to control his impulses.

Thinking I’m wasteful when I’m not…

On paper, plenty of people make more money than I do, but we definitely make enough. More than enough. Enough that I can do things I couldn’t before. Even though my brain doesn’t always believe it.

For years I’ve had a false idea of who I am — someone wasteful, who spends money without thinking. I’m not sure if my dad, ex husband, or stepfather made me think that about myself, but somewhere in there, the idea stuck. A big, fat lie that still wreaks havoc today.

My whole life I’d wanted things I couldn’t have — which certainly leads to misery on top of stress. I coveted a car that didn’t clunk when I drove it, new clothes, a nice home. Post-divorce I got the car (that I still drive seven years later) — I think it was meant as a “You finally ditched your fuck-up ex” kind of gift. (By “gift” I mean “interest free loan” which counts as a gift.)

But wanting doesn’t mean getting. The fact that I wanted things didn’t make me inherently bad. And I certainly wasn’t wasteful.

In the move (a month ago), we finally got rid of a dented, battered, and barely openable filing cabinet I’d had for 15+ years. And a beat-up older recliner I bought 10 years before, so bad I couldn’t sit in it without aggravating my old neck problems.

I’m still teased about the rolling laundry basket FROM COLLEGE that I didn’t replace until 2015 (another 15+ year purchase). One wheel had fallen off, and I’d lost the lid years ago, and I still used it. Until John Brownstone told me we had to replace it.

Spending on myself isn’t easy…

Even today, the habit lingers. I only own two bras (yes, that’s right, two) and many articles of clothing I’ve had for more than a decade. And no, they’re not the classic pieces that last forever. Until recently, I didn’t own enough pairs of pants to get me through more than a single week. Buying clothes for myself is painful because I feel like I have to justify every single second of owning them. I once went three weeks without buying new lotion after I’d run out because I felt guilty about the purchase.

It’s not that I can’t own more bras (one is in the mail as we speak, and I can’t wait to try it on). We can (now) afford for me to own nicer, better clothing — I ordered a new dress the other day (on sale, with a coupon). My lotion is now body butter, and I buy it all from The Butters (because I can).

It’s not about the purchases. It’s about the guilt, the worry, the feeling that this financial security can’t possibly last, and that sacrifices will have be made again. Better not to let yourself get used to comfort in case it gets ripped away in the future. Feeling like I don’t deserve nice things or that they’re for other people. Terrified that my willingness to spend money means I really am wasteful.

Even as it becomes easier, it’s still difficult…

I’m not going to pretend that I agonize over every decision these days. Comfort and financial security have a way of becoming easier. I didn’t blink when we bought new living room furniture — enough to actually seat the entire family. Our next purchase will likely be a new dryer (we were forced to buy a new washer over a year ago).

Knowing what I spent on a hair cut and color today makes me cringe. I worry that the casual way I bought a single set of lingerie and a dress means I’m destined for a life of wasteful spending.

I don’t say all of this as a woe-is-me, my-life-is-hard-because-I’m-NOT-broke. That’s not it at all.

It’s that being poor stays with you. It impacts every part of your life in some way. For me, it exacerbates my anxiety. Small worries become big worries. It works out because I’m also cautious about the money we spend.

But I also know I shouldn’t be this damn anxious over a couple of purchases, either. Watching how my mother navigates life in comfort gives me hope. Not that I’ll have her kind of retirement but that the old worries may never go away but maybe they can fade.