Welcome back to Scintillating Sunday, y’all! This week’s excerpt (8 words, sentences, or paragraphs) is from Madame Gretchen. I’m focusing on someone who hasn’t gotten enough attention – Randy Boy. He’s  submissive, and a bit of an exhibitionist. And of course, Gretchen is going to push his boundaries…

Randy’s eyes shot up to meet Madame Gretchen. Had she known he wasn’t paying attention? How did she always manage to seem so abrupt? There was never an easing into anything with her. Get naked and do my bidding. He felt his body react at the thought.

Swallowing hard, he stood and joined the Domme at the front of the room. He tried not to think about Greek gods, female flesh, or fuckable mouths. He willed his cock to calm down, to no avail. He might be nervous, but he’d always had the urge to be watched by others, an exhibitionist Madame Gretchen called him. Well, okay, maybe he was, but it didn’t mean he wanted his cock at full attention. What if they thought he was a pervert walking around with a hard dick? Dude, you’re in a kink class taught by a woman covered in leather. You’re definitely a pervert. Get your clothes off before she makes you look like a fool in front of everyone.

His cock twitched and jerked in response to her whispers. He could make himself believe it was simply the smell of her perfume, the scent of rosemary and mint filling his senses, or maybe it was the lusciousness of her full breasts under his nose. But he knew that was nothing compared to her question. Would she let him? Did he want her to? And would he do as she bid once he was alone?

Madame Gretchen pulled away and walked around him, her eyes appraising every inch of visible flesh. Periodically, she reached out to stroke his body with the tip of her riding crop. His nipple. Then his hip. He jumped when the crop stroked the small of his back, following the line dividing his buttocks. Behind his knee. His thigh. When her crop tapped the darkening tip of his shaft, he groaned and closed his eyes.

“Part of what makes an exhibitionist so fun is that at first they’re a little nervous, then they forget the audience exists.” Madame Gretchen’s voice was raspy. Randy wanted to believe it was with desire, but he doubted it. “A good top will find ways to help them remember the audience, because that’s when the excitement kicks in. Most exhibitionists want to be desired, even if they could give two shits about your opinion later. They want you to want them – to want their pain, to want their desire, to want their orgasm. That’s what gets them off most of all. They want to be seen and desired.”

The others seemed to lean in as she spoke, trying to take in all of her words, trying to see more of what she was doing to him, he didn’t know, but they seemed to be closer than when he first stood up.

“Isn’t that right, Randy Boy?” He could hear the hard edge in her voice. “You want everyone to want you. When I’m done, they’ll either want you or pity you.” His skin flushed as she laughed, a joyful sound. She fucking loves this. 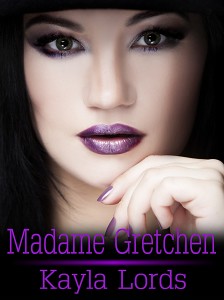 Madame Gretchen has been my favorite book to write so far. Several people have asked for the story to continue, and I’ve laid out a few plans for each character to get their own book. Give me some time, but I will work on it. Promise!