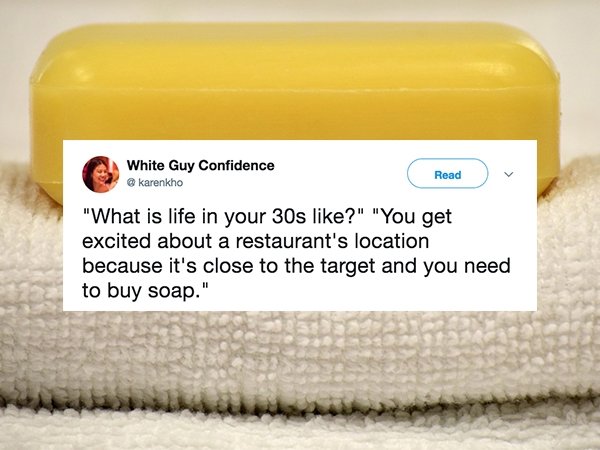 Changing decades has always done that to me.

I still remember thinking, “Finally!” when I hit double-digits at 10. I’d been told for years that I was so mature for my age and that I looked older than I was. That’s what happens when you get boobs and your period before you’re 10 (at 8 and 9, respectively). I was ready for the calendar to catch up with how the world treated me.

At 20, I felt like I was supposed to be an adult, although the big 2-0 was a bit of a letdown as I still had to wait another year to hit the real milestone. Twenty-one and legal, baby! But turning 20 felt momentous. I was stepping into adulthood in a new way. No longer a teenager and living with plenty of real world responsibilities.

Thirty fucked with me. Like the vast majority of us up until that point, I’d thought 30 was old. But when I got to 29 years and 11 months, I realized how wrong I was. I was just getting started! Although I worried that I’d ruined my life and that my best years were behind me. My 20s had been stressful, exhausting — nothing like what TV and the pre-social media internet told me it should be.

I didn’t club, party, dance, date, sleep around, or do anything I might have considered fun. Instead, I worked, raised a family, and refused to admit I didn’t really like (or love) my then-husband. At the end of that decade my focus was on everything I hadn’t done in my 20s, a time I would never get back.

Maybe that’s (part of) why so much changed after I hit 30. Now I was really an adult (all those years after about 22 notwithstanding). There was no one to save me or fix my problems. If I wanted my life to change, I had to do it. Adulting at its finest (before we even had the word “adulting” which I love).

So much as happened in this decade:

I turned 30 right after my youngest was born. Less than two years later (about 16 months), I left my husband who had stopped participating in our relationship long before we got married. I could blame him for my wasted 20s, but I don’t. I made my own choices.

By 32, I was single, had a sex blog, and realized I was kinky. Thirty-three was kind of a big year, lol.

Thirty represents a real before and after in my life. Before 30, I existed from moment to moment, letting myself drift through life. Not sure how to change course, and not sure I should or even could. Based on that angst alone, I wouldn’t go back to my 20s for anything.

Something about hitting my third decade, and the weirdness I felt about it, made me take stock of my life.

From unhappy vanilla life to exciting kinky life, my 30s represent so much change. The vast majority of it good.

So why the fuck am I freaking out about 40?

Maybe it’s because I’m already becoming invisible (which I thought wouldn’t happen until my 50s) to the opposite sex and anyone 30 or younger. Which, by the way, is okay with me. If you can’t see me because of my age or appearance, I’m certainly not interested in being seen by you.

This could just be part of the process. Change decades, freak out, get used to it, settle down.

But part of me wonders if it’s prior experience weighing on my mind. This past decade has been tumultuous — in good and bad ways. I’ve grown leaps and bounds. Even my own family doesn’t always recognize this version of me. Frankly, I like 39 year old me much better than me at 29. I’m a lot more interesting, and I have fewer fucks to give. It’s kind of refreshing.

If all that could happen between 30 and 39, what in the ever loving hell is going to happen from 40 to 49? Good things I hope. I can feel new confidence rising. The old me, from before 35 or so, had so many questions, concerns, and worries. This new me still questions and worries (thank you, anxiety) but I’ve got more confidence in myself.

I think turning 40 this year represents an “after” of sorts. My 30s are an in-between time when I did a lot of growing and adjusting. This was my time to gain experience and confidence and lose some of what weighs me down. (I still have plenty of issues and baggage — aging isn’t an automatic fix for anything.)

I understand the expression “forged in fire” better than ever. I’m never infallible and things always fuck up, but I’ve handled everything life has thrown at me up until this moment. And I can handle whatever happens next.

I guess I’ll find out in the months and years to come. But everything up to my 30s feels like a before. The after is new and exciting, but also, a little scary. There’s so much more to gain…and to lose.

Welcome to Wicked Wednesday! This week’s prompt is “before and after” and this is where my mind went.