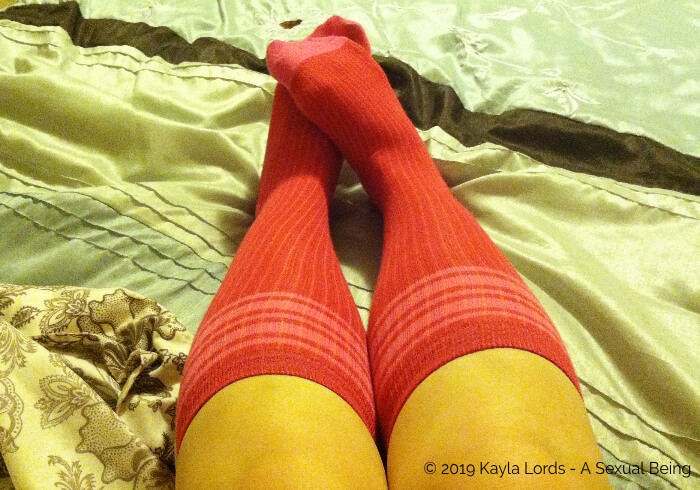 (The featured image is from 2013 when I was first exploring what it meant to be a babygirl. Knee socks were a part of that for me. No, I don’t know why I didn’t have purple socks, either.)

To me, being a babygirl is somewhere on the little spectrum. I don’t identify with an age, I don’t really go into little space all that often, and I don’t do age play. That being said, I love certain “little” stereotypes like Disney movies, stuffed animals, etc. When I’m my babygirl self, I’m a little less mature, more carefree, and not exactly the nearly 40 year old woman you’d expect.

Everything about my babygirl self is pure vulnerability. This is the part of myself that I pushed down at a young age. At age eight, I heard how “mature” I seemed. By 13, I had the body of someone 18 or 20 and was often treated as if I was. Long before that, I learned “if you keep crying, I’ll give you something to cry about.” Surrounded by adults for most of my life, I’ve never “acted my age.” Frankly, I’m happy to be nearly 40 — people my own age are so much more relatable to me than they used to be.

To behave in a way that made me appeared younger or immature was unthinkable. Frankly, I liked the attention for being mature and responsible. But I love praise and always have. Verbal gold stars are definitely one of my kinks.

But I denied my babygirl side for a long time, not loving the stereotype of what I thought it meant to be little. I couldn’t reconcile who I was with what I thought being “a babygirl” might mean.

Until John Brownstone. It’s been his love and his strength that allowed me to tap into this part of who I am. The most vulnerable part of myself. I struggled at first…until I didn’t.

These days, I look back and see the signs. When I giggle and my voice changes, turning higher, softening, my entire body lets go of a tension I don’t know I’m holding until it’s gone. My head tilts and my eyes widen. Any smile brightens…conversely, any pout deepens.

Being babygirl means I’m vulnerable. I can react and be whoever I am in the moment, even if whoever that may be is anything but mature, calm, or reasoned.

As a babygirl, I do things that I never could before: stomp feet, proclaim annoyance, and decide, “I’m not gonna!” Those behaviors weren’t allowed from some age I don’t even remember. Being upset and showing strong (negative) emotion wasn’t okay. If I was crying about anything, I would be given a reason to cry. So I learned to suck it up, and move on. Conceal, don’t feel. (Bonus points to anyone who knows the reference.)

But the same was true for happiness, too. Anyone who knows me a little (usually via podcast) knows I’m boisterous and loud, with a voice and a laugh that carry for miles. It’s not unusual for me to throw my head back, open my mouth wide, and take up a lot of space in my joy. That wasn’t allowed either growing up. Too loud, too big, too much — I heard those things for so many years that it’s now part of my internal voice.

As with so many things, though, once we give ourselves permission to be who we are, there’s almost no going back. You can’t stuff it back into the box again. Once freed, my babygirl self burst into the world, taking up all the space. In the beginning, that meant I could be vulnerable at home, alone with John Brownstone. Now? Oh, my babygirl self explodes out almost anywhere. I’m a fully functioning adult so I know what’s okay and what isn’t, so maybe it’s subtle, but there I am. In all my unapologetic glory. With my purple and my laugh and my whatever else I’ve decided I desperately need.

As I’m a babygirl,  you might think I’m prone to tantrums. You’d be wrong. If it gets so bad I’m about to meltdown into a legitimate tantrum, I come out of the headspace pretty quick. Now I’m pissed, and Alpha me has a few things to fucking say. That’s rare, though.

John Brownstone calls my whining a “tantrum” but he has no idea how much worse it could get. I whine and pout and ball my hands up into fists and flail. Yep, aaaaaaall of that — I can be a fucking handful. But I’m not trying to get my way during these “tantrums.” I know I’m safe. Safe to express displeasure and to cry fake or real tears, to demand that I want something different, that something isn’t fair. I’m safe to be all of myself in a way I never have been before.

Because, good or bad, happy or sad, expressing any emotion as my babygirl self is as vulnerable as I know how to be. Loved and cherished. And never too much for him.

Welcome to Wicked Wednesday! This week’s prompt was about tantrums and of course I had a few thoughts! For actual sexy stuff, click below.