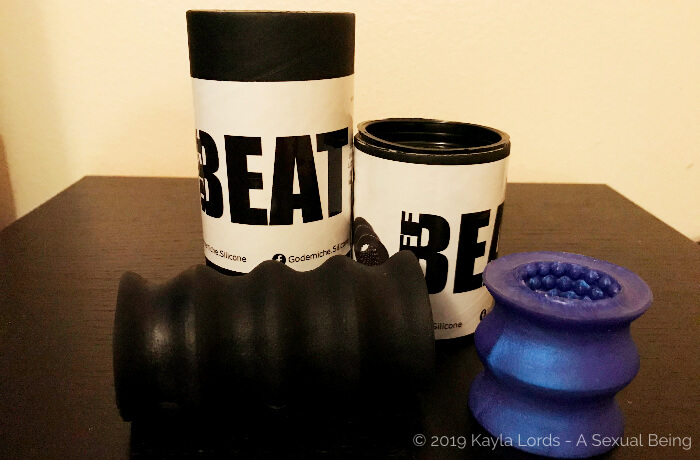 Basically, I think I’m fairly liberal in my wanking beliefs.

So why was I thrown off a bit when John Brownstone pulled out his OffBeat (the latest amazing toy from Godemiche!) for a quick (and very solo) wank?

Was it because I wanted to be a part of it? Because he didn’t mention it first? Maybe it was the fault of the migraine sapping all of my physical and mental strength. Had I been 100 percent, I wouldn’t have cared, and I might have offered to hold his new toy for him.

Instead I lay in bed, in that precise position you find when your head feels like it’s going to break apart into a thousand pieces. Did I close my eyes because light hurt? Nope. My thumb continued it’s upward scroll, as I searched for a recipe I Just Had To Find.

Is there anything more domestic than recipe hunting with the squelching sounds of silicone against cock in the background? I doubt it.

For a moment, I felt like an intruder on a private moment. But if it was so private, why did he whip out the masturbator and the lube next to me in bed? Clearly he was comfortable with an audience. Although my eyes never left the screen, my ears reached back (metaphorically speaking) to catch every slippery squelch.

Why watch when you can listen?

The sucking, thwacking, squelching felt like an exaggerated version of his cock and my cunt. Lucky toy.

His moans were barely-there gasps, almost like a secret he kept to himself. Was he more uncertain about this than he seemed? Or did the pleasure take its time unfolding in his body, each new sensation could hardly be believed, growing atop the moment before it?

I confess that I forgot to scroll through my Very Important Recipes for a while. My cunt throbbed in time with each sucking squelch. Each noisy pass of the silicone along his cock seared my skin.

And when he finally reached the point of no return, my body clenched around nothing but desire as he exploded. I wasn’t the only one on the verge of bursting into a thousand pieces that night. When he came, I think we both saw stars.