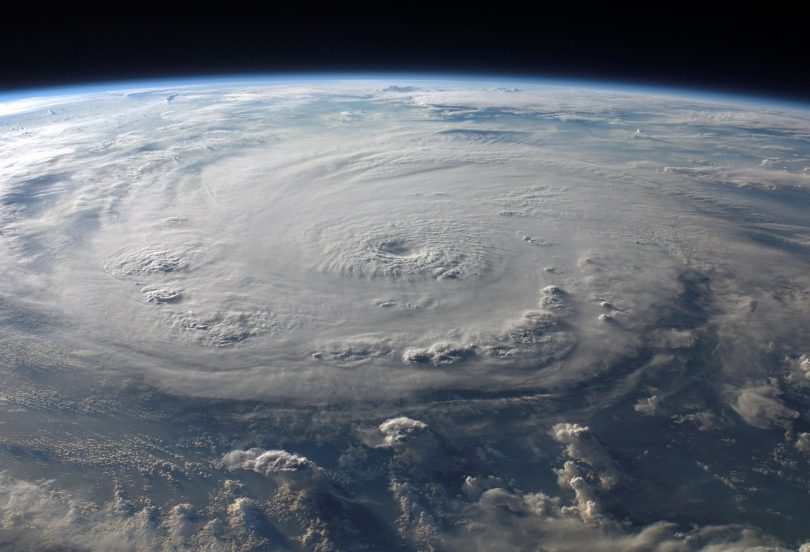 I was eight when I rode out my first hurricane.

My family was poor. Probably well below the poverty line. Evacuating wasn’t an option. No money for the extra tank of gas it would have cost. Little money for extra water, batteries, and anything else you’re told to buy for hurricane season. Boarding up your windows? Maybe other people bought plywood for that. Not us. My dad taped up plastic sheeting to cover the glass. It wouldn’t prevent breakage, only keep glass from shattering into our tin can of a mobile home.

At some point during the storm – I don’t remember when – we huddled together. The winds shrieked around us. I covered my head with my arms, sobbing in fear. Later, my father took me outside as the eye passed over. I vividly remember thinking the storm was gone. He quickly corrected me. In the center of the eye, things are calm. The hurricane would be back and with it, rain and wind.

When it was over, I understood (vaguely, in a child-like way) we’d survived something. After that, while we still lived in Florida, hurricanes were things seen on the news. I remember images of Homestead after Hurricane Andrew, entire neighborhoods flattened and crushed. But I don’t remember anything like that first experience.

Fast forward several years…we moved to south Mississippi. Storms kept hitting Florida but we were mostly out of the way. Later, after college, when I lived on the beach in Biloxi, MS, we began to get our fair share of storms. I moved from one apartment to another in Tropical Storm Bill (or was it Bob)? I sat through many tropical storms and Category One hurricanes over the years. They sent rain and wind and downed power lines and trees. Very little scared me. I don’t even remember their names anymore.

Until Hurricane Ivan. The forecast had it coming right over Pascagoula, MS – I lived less than five miles away. My mom told me to stay in her old house that hadn’t yet been sold. It was sturdier than the one I lived in – and about 50 yards further away from the bayou. No one talked about evacuation. We made sure we had flashlights and water. We put the car in the garage and brought everything that could become a missile in the wind inside. Instead of leaving, we prepared as best we could.

We had no windowless interior rooms in that house. We sat in the hallway instead. Her two dogs – a Golden Labrador and a Great Dane – shivered against me, leaning in and whining. The wind whipped around the house. I wondered if the sunroom would survive. Her fence wouldn’t, it went down in every tropical storm and hurricane. I could hear debris flying through the air, landing somewhere. I was as terrified as I’d been when I was eight.

Once the worst of the storm passed, we learned that Ivan shifted one last time before landfall. It came on shore between Mobile, AL and Pensacola, FL. Somehow, south Mississippi had escaped the worst side of things (the northeast side of a hurricane is the most destructive). Yes, there were trees, power lines, fences, and roofs down but we would be fine.

Less than a year later, I left Mississippi and moved to the panhandle of Florida. I found out later that it was known as “Hurricane Alley” because so many storms came up that way. As we drove down the highway into Alabama and Florida, we saw homes covered with blue tarps – still needing repairs from Ivan. We crossed a bridge leading out of Pensacola – one that wouldn’t be rebuilt for another few years. One side of the bridge was nothing but grating and big chunks had been taken out of the concrete. How was this thing still safe?! Driving slowly wasn’t optional but a requirement. The magnitude of Ivan struck me, seeing what it had done just a couple hours east of us.

After Ivan came the year of multiple storms. In 2005, a month after I gave birth to my oldest, Katrina set it’s sights on south Mississippi. Prior to that one, storms hit the area, names I don’t remember. Afterwards, more storms came – Rita, Wilma. Some came right over the top of where I lived though I never evacuated. Just as my mother didn’t leave for Katrina. In fact, she called me at one point as the storm passed over her house. Tree limbs and shingles blew through the air. Our connection cracked and wavered. Finally, she said, “I should probably get off the phone. It’s picking up again.”

I barely talked to her for two weeks after that. The news focused on the devastation and humanitarian crisis in New Orleans. But what most people didn’t see was what happened to south Mississippi. The water came on shore and flattened entire swaths of the coast. My old apartment in Biloxi, gone. The place where I got married, gone. Memories of places from my 15 years living in the area, all gone. Entire beach communities, destroyed.

My mom lived far enough north that, structurally, they were sound. But everyone was without power for weeks and weeks. Cell service took forever to get back. My mom worked (and still works) for a home improvement store. She spent 12 to 16 hours a day selling supplies to help rebuild and handing out free water to survivors. They took baths in the pond behind their house and peed in the yard. I wouldn’t know this part for months, even years. People endured but few talked about it.

In Florida, I rocked my newborn baby and watched the news. All the time. Every day. Hating what I saw in New Orleans while also hating how south Mississippi was ignored. As a family member with limited contact to the area, I needed to see what was going on. Social media didn’t exist. Hell, no one had smartphones. How could I tell how bad the damage was if no one with a camera would look at it?!

A few storms later, and things went mostly quiet. A tropical storm here, a Category One hurricane there. Nothing too bad for our area. Sandy devastated the north, I know, but for my part of the country, all was well. People began to forget what big, bad storms were like. Memories are short, especially when storms land elsewhere.

I watched the news when Hurricane Harvey hit. My heart went out to everyone. I couldn’t imagine what they were going through. And, like everyone else who lives in hurricane prone areas, I thanked the deities and stars above it didn’t hit us.

And then came Hurricane Irma.

I didn’t know if this post could be told in one part or two until I began typing. For anyone who wondered how I could decide against evacuating (at first), maybe this will help you understand. Even in the worst storms, we stayed put, enduring. Maybe we shouldn’t have, but it’s what we did. It’s in my blood. In the next part, I’ll share how I felt about Irma and evacuating for my first storm.