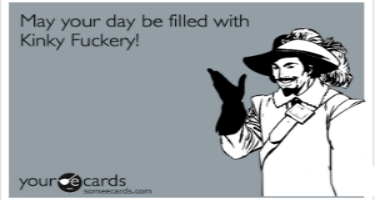 Raise your hand if you have all the kinky fuckery you could ever want, if you’re never derailed by exhaustion, cranky children, or life in general. Okay, for anyone who raised your hands, I’m not talking to you. I hate you, I hate you so much! (Kidding!) For the rest of us, if you’ve got the potential for kinky fuckery but not a lot of actual kinky fuckery going on, this one is for you.

Y’all know me. I’m not one for giving advice in the form of how-tos, lists, and all the rest. But after one conversation with John Brownstone, and I knew I needed to share our thoughts.

Remember when I ended up on the floor being flogged and later fucked? That was supposed to happen, and then it wasn’t. But then it happened anyway. Confused yet?

Standing outside during a family BBQ at Daddy’s sister’s house, he leaned in close and promised me a night of kinky fuckery. First I blushed because of the proximity to his family during the revelation. Then I shivered because there is never enough kinky fuckery, and I wanted it – bad.

Later that night, as we made our way upstairs, he confessed it wouldn’t happen that night. The day had lasted longer than he anticipated. We were at his sister’s house for several hours surrounded by a loud, rowdy, rambunctious family. He was too tired.

I was disappointed (of course I was!) but I tried not to let it show too much. I told him what I often tell him. “I understand. I realized it earlier. It’s okay. Maybe another night.”

Then we started talking.

“We need to make time for it.”

Before the flogging, I had ideas. Then one hit me (lol, pun definitely intended) during the flogging. So here it goes.

The John Brownstone-Kayla Lords How to Make Time for Kinky Fuckery list:

For the record, I think this is completely doable in most households. I’ve got two kids who sleep just down the hall from me. I know that means I have to be vewy vewy quiet. Daddy is constantly dealing with work stress and family stress. We know about being tired and pushed to the max. But I think kinky fuckery is like anything else in life. We make time for the things we value – and I haven’t met a kinkster yet who didn’t value their kinky fuckery time. With a bit of planning and time management – and possibly powering through even when we feel tired – we can all have more kinky fuckery.