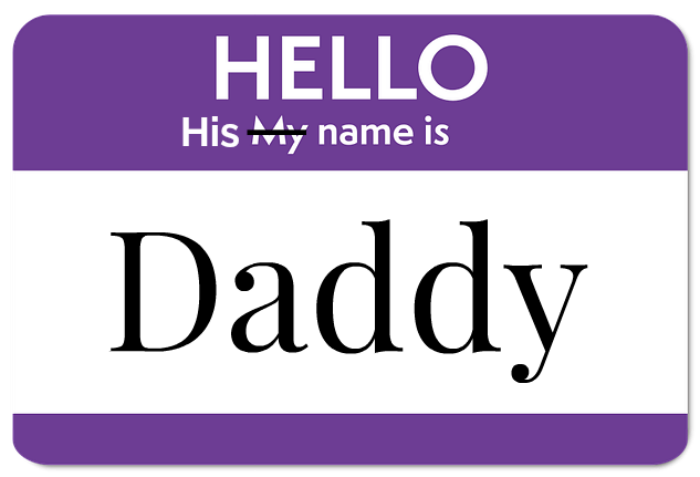 I remember the first time I wondered if John Brownstone might be a Daddy Dom. When I mentioned it to him, he laughed. Any time I thought about calling him “Daddy,” I got a squishy feeling in my stomach. It felt right but…What would people think? What did that say about me? Did I have Daddy issues?

To those who feel outrage that anyone’s personal actions might be inhibited by what other people think, get upset all you want but it doesn’t change my inherent personality. I’ve always been that type, and I have to work really hard to overcome it on certain things. (Although, discussing my own kinks, sex, and orgasms don’t seem to be an issue.) So yes, long before I called him “Daddy” I worried over it and pretended it wasn’t a thing for me. I blogged about it, when I first called him Daddy, and when I was still wrestling with the decision. But after years of growing more comfortable around the term Daddy, I’ve learned there’s more to it than a simple decision.

I Called Him “Sir” at First

For those who don’t know, I wasn’t always a giggly, silly babygirl and John Brownstone wasn’t always my indulgent Daddy Dom. Hell, he is still known as Southern Sir online in a variety of places, and many submissives (out of respect) refer to him as Sir. He called me “pet” which didn’t always feel right but it was familiar. He called me “little one” which to this day can make me blush and giggle. We also have a special, private name that he used to say during our most intimate moments.

To me, he was Sir. While familiar and comfortable, the title didn’t always fit. At least not to me. In my mind, a Sir was stern and disciplined, the silent type. John Brownstone was a laugher and a tease. He poked fun, told jokes, and delivered so many bad puns. (Oh God, the puns!) The more I learned about Daddy Doms, the more it seemed to fit. Note: A Dominant can have many, many traits and use any title they want. These observations are personal to us and were part of my evolution as his submissive.

My favorite story to tell (based on how often I tell it) is how we figured out that “Daddy” was his real name. Wanting to call him that had been on my mind a lot, but I was afraid. What if he rejected it? What if he laughed? Or got angry? So I did what any cheeky babygirl would do – I screamed it out during kinky sex. I figured if he didn’t like it, I could blame it on the heat of the moment. Instead, he fucked me harder than before. He became a wild man, so I said it again. And again. After that, he was Daddy and has been ever since.

I Don’t Always Call Him Daddy

Remember when I said earlier than I’m the type to worry about what other people think? It’s primarily a defense mechanism of not wanting to bring too much attention to myself. Negative attention, mostly. So no, I don’t call him “Daddy” in a lot of situations. Around the kids? Nope. Around my vanilla family? Not at all. Around other kinksters? Sometimes.

Kids and the family probably makes sense to everyone. My children know exactly who their father is, and they’re going to wonder why I’m calling the person they know as “Mr. John” by such a name. My mother vividly remembers me referring to my own father as Daddy sooooo that would be an awkward conversation I don’t want to have with her. Why not other kinksters, though? I’m not afraid of judgement, not at this point in our relationship. But I do have a reason…

Being a babygirl is my most vulnerable self. It doesn’t matter if I’m laughing or crying, allowing that part of me to show means you’re seeing my gooey center. One of my (many) defense mechanisms is to be sort of reserved when I first meet people – with notable exceptions. Using the name “Daddy” is one of my vulnerabilities. Need proof that I’m comfortable with you, the crowd, or my surroundings? Am I calling him Daddy or am I calling him John Brownstone?

What we call each other in D/s is inherently personal to each of us. The names we use are about the person we’re with and who we are together. After my first relationship where he was Sir and I was pet, I truly believed that I was a submissive who preferred the “Sir” title. Part of my education in D/s was learning that it’s not the title that matters. It’s what you feel, how you see your partner, and (as always) what works best for both people.

Yay for Kink of the Week (which I need to do more often)! The theme was names and titles which is a topic I’ve thought about many times over the years. For more and different views on the topic of names and titles, click below.