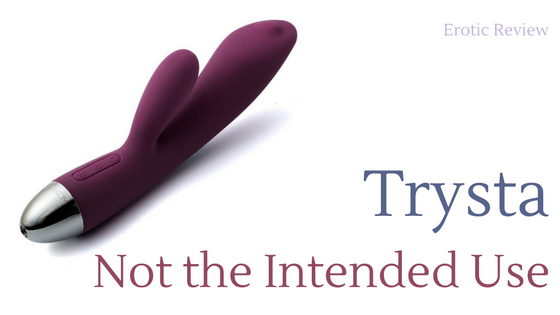 I didn’t want to wake up.

My bed was warm. The covers were a comfortable weight. Hell, I was naked and snuggled in the middle of thick pillows.

Maybe I just didn’t want to get out of bed. Waking up wasn’t really the problem. Leaving the bed meant walking the dog, making breakfast, and handling disputes between the kids.

I need an orgasm. Yes, these really are thoughts I have.

First, I braved the cold to grab the towel (and pee, of course). I hadn’t masturbated since before Christmas – I didn’t know how gushy this might be. And I love Svakom toys, so I had high hopes for at least one big orgasm.

Settled in bed, the cool air kissing damp places on my body, I turned on the toy. The vibrations were strong, but the rolling ball in the g-spot stimulator had me really excited.

I spread my legs and pressed the toy against my clit. One decent orgasm should get me wet enough to slip it in. I started on the lowest setting. Mmmm, that feels good. Not enough to curl my toes, but a good start. I pressed the button again, up another notch. Better. I like this. Then again. Now my heels were digging into the bed. Again, the next setting. Fuuuuuuuuuuuck. My body shuddered and bucked as my pussy clenched.

Now, I was ready.

The relatively slim and small toy slipped inside. The vibrations felt good but definitely weren’t going to do a damn thing. I hit the button that made the rolling ball start moving around. I changed the angle. I moved my hips. I turned up all settings to the highest power.

The clitoral stimulator didn’t reach my clit at all. A buzzing along my labia felt nice but not take-me-to-paradise good. I jiggled the toy. Nada. I know when my g-spot is being stimulated. The orgasm takes a while to build, but there’s no mistaking the I’m-gonna-squirt-eventually feeling. It wasn’t there.

And no matter how I bent my body or manipulated the toy, my clit was completely left out of the fun.

“Fuck this,” I muttered.

I pulled it out, the silicone covered in my fluids, and pressed the g-spot stimulator against my clit. The rolling ball was too much for my sensitive flesh, so I turned it off but the vibrations were perfect. Highest setting, knees apart, throbbing clit — it all added up to gushing orgasms. One, then another, then a third. The towel under me was soaked. I went limp.

I wondered if, now that I was melted and a puddle of bliss, the toy would do it’s job on my g-spot. The wand was coated, slick and shiny. It slid into my pussy easily. More angling. More jiggling. More playing with all the settings. Nothing.

I was disappointed but I knew how to make it work for me. For the last time, I pulled it out, set the vibrations to the highest point, and pressed it against my clit until I exploded, choking back a scream, hips jerking and legs trembling.

That might not have been it’s intended use, but it got the job done.

About the Trysta by Svakom 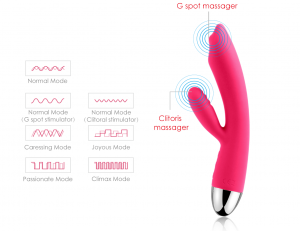 I’m not going to lie. I was so excited to try another Svakom toy (the Keri and the Tyler are two of our most beloved toys) and was disappointed in the outcome. Past experience made me think this thing was going to something amazing on my g-spot. It just didn’t happen for me.

Svakom toys are excellent in general. I have a feeling this is a matter of incompatible size. The toy is smaller than other g-spot stimulators and rabbits I’ve tried in the past. It didn’t hit my g-spot or clit when it was inserted, no matter how many angles I tried – and yes, it was all the way in. If you’re smaller than I am (or at least your pelvic region is), you might have better success with it than I did. (For reference, I’m 5’6″, a size 12/14, and have plenty of junk in my trunk.)

That being said, I can definitely vouch for the strength of the vibrations. When I did orgasm, they were juicy and creamy and very satisfying. The Trysta definitely needed to be cleaned off when I was done. But did I get an orgasm from it’s intended use? Unfortunately, no. Do I still like Svakom in general? Absolutely. Not every toy in a product line will work for everyone.

The Trysta is waterproof and has 35 different frequency sensations because you can change the rolling sensation and the vibrations independently. It’s small, light weight, and very quiet. It’s rechargeable so no batteries needed (I’m learning to love that kind of feature). I wish I could give this one a wholehearted recommendation, but it seems it will likely only work for the more petite among us.