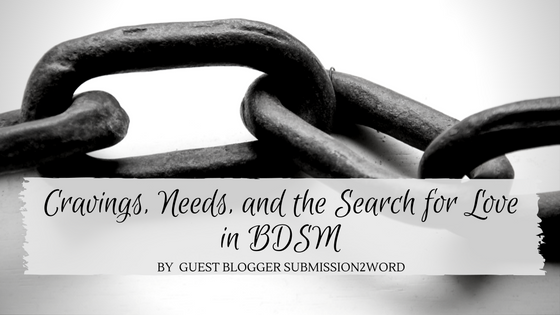 Male submission is endlessly fascinating to me. I often wonder how alike and how different the genders are in submission. Like all things, it’s not really about whether we’re male or female but who we are as individuals. When S, a male submissive who blogs at Submission2Word, reached out with his story, I was immediately captivated. From the first few paragraphs, I wanted to know more. What he’s shared is painfully and brutally honest and beautifully written. Like everyone else I’ve met – in person or online, kink and BDSM brought him on a long, winding journey that continues to this day.

Yearning an experience of submission, with all of the degradation and sexually perverse activities that coexist within these encounters, has been a goal that has taken, at times, a powerful hold over my adult existence.

Submission takes me away from the realities of loneliness, the anxieties about self worth or my capability to live and function. Perhaps, the traumas that were present in my early life, as a consequence of parental neglect and abuse, drove me to seek a great escape from the hell that passed for my normal life.

The early experience of pleasure that came from receiving a spanking, being partially cross-dressed or restrained became some compensation for being unable to form a close relationship with a potential love.

Depression became a feature of my early adult years as I reluctantly accepted that I was unable to conquer my low self esteem and endear those elusive young women I found exciting. Submission, usually to an older gay male, would offer momentary excitement and fleeting comfort until, after orgasm, guilt; born out of Roman Catholic moral education, replaced that pleasure.

I would seek out those experiences, in the days before the internet, through cottaging. Being in an awful public toilet seeking a submissive experience, again, perversely became an exciting, mind altering trip away from reality.

My first fetish spanking and my first spanking since my fathers last, came from a gay man, while I was at college. I wore knickers as I wriggled, under his hand, on his lap. My cock leaked excitement as he warmed my arse and I came before leaving, sometimes, in his mouth. Always, I felt terrible guilt.

Thirteen years of marriage began with a church wedding, then a loss of our first child, followed by having two lovely children.  After having our third child, I felt like I was being discarded. I had done my job. Father now was purely a provider and sex, along with affection were denied by a woman who was isolated, perhaps in grief, from me.

My journey through my career, a program of martial arts, counselling and confidence building, culminated towards a recognition that I could not continue to live with my wife. Leaving my children left me completely alone.  Seeking solace and love, I turned to the internet and online contacts.

Now, the internet made finding someone and exposing my kink so much easier. A heartbreak, after a year or so in a long distance relationship, led me into my first Kink-based relationship.

A drama, an adventure and mental anguish were about to unfold. A journey from heartbreak to release within play and fantasy was beginning.

At first, I sought love and sex but heartbreak after a long distance relationship sent my mind into retreat within that neglected space where my submissive reemerged.

Dark places, within a landscape that offered tinder for a submissive’s desires, became my playground. Gay dating sites, online gay chat sites and fetish contact sites were fertile ground for dalliance with gay or bi dominants and even some meets with casual female dominants.

My first Dominant, J, was a bi, disabled man. Debauched, he was unsubtle and sleazy. I dressed like a girl for him. I shook my bottom for him and he grabbed my arse, my balls and my cock and drained me. He caned me and he spanked me. I was sated and then guilt ridden. When the guilt had gone, I would go back.

Desperately, I sought women who might take the place of that man. I wanted the excitement, I craved the pain but I wanted to be free of the guilt.

First there was C. She was a swinger. C promised love and perhaps monogamy.  C lived for hedonism and I was unable to share her. I needed love and reassurance. I needed more than she could give.

Then came B. B was a Switch. B promised love and partnership. B wanted to conquer her own body confidence issues and sought the best of both kink and convenience. She needed a man who could help her live her dreams in daily life and kink. B was nervous about meeting, then finally we began a courtship and an adventure. We explored switching, dressing up, CP, BDMS and sex.

B spanked me, caned me and encouraged me to dress as a woman. All of my fantasies were given space to breath. Guilt never reared its head.

B had a complicated history that, perhaps, even more complex than my own. She had been sexually abused by her Mother’s partners. She hit a previous partner and had begun therapy in the wake of that relationships demise. She told me that if she ever hit me, she would walk away.

B seemed to want to take the lead. In both play and life she sought supremacy. At times, she became irritated by, what she deemed to be, my inferiority. She would castigate me when I made mistakes or said the “wrong” thing.

At her worst, B could be dismissive and scathing in her criticism. Perhaps, seeing me as someone she could mould,  B felt she could have a man who could be a sexual and material partner who could be patronised and subjugated in equal measure. B took great pleasure in telling me that I wouldn’t find sexual compatibility with another easily and that “I would be scratching around in the dirt”, if it were not for her.

My insecurity kept me there. I let those old online contacts of hers make me feel evermore anxiety and when she chose to spend an hour texting one of them, I snapped. B had chosen not to allow me to visit during the week. She “needed her space!” The bickering, anxiety and her manipulative motions regarding money and help with her house costs culminated in my applying a brake on her moving in and demanding some acknowledgement from her that her behavior was unreasonable.

A row, two rows and it was over.

I broke down and sought help.

My kinky self sought new friendships and experience within the Fetlife community. My first munch led to a play munch and there, before long, I met my second C.

She courted attention. She was a Prima Donna in red lace and lurid lipstick. Parading with her lashes thick with mascara and a dress as translucent as a window, she, for me, was the epitome of courage in exhibition and I couldn’t help but wonder what she might be willing to do.

I said, “Hello, you look amazing!”

She replied, with a smile and much fluttering of lashes, “Thank you.”

There began a game and I was under her spell.

She seduced. I fell.

She sapped my money, had me as her Chauffeur, managed my rehabilitation from unemployment to work and took me in to share her house. For 6 weeks, she played the dominant and the switch and professed great experience and capability. Then, suddenly, her interest waned and I would beg for her attention.

She had taken me, like a handbag, to munches. I was a symbol, representing her power and prestige. She had wanted to play with others but I couldn’t share someone, who, despite it all, I wanted to love. There at her heels, I knelt, eager to worship and to serve but most of all, needing to be wanted.

She was happy to live in a mess and allowed her son to create chaos around us. I tried to tidy up the house but was thwarted by her son, his friends, and their disregard for our space.

In the end, my protests were greeted by an uprising. I was tricked out of the house. I was homeless.

Now, I have had to come to terms with what has driven me to play and why I have played the submissive role in both life and play. Interpersonal Dynamic Therapy has given me courage and self confidence. I used to fear those I loved. I was drawn to those who might take advantage of my malleability.

My desire to submit still rears within my body. My loins stir and my head is occupied by those urges. I crave a hand on my backside and a toy in my bum. I crave a cane slicing through the air and the brand of it’s bite on my flesh.

Today, I live with my desire and my self, whole and confident.

I explore life through my thoughts, photography and my body; thoughts sometimes coloured with kink, sometimes concerned with society and human behaviour.