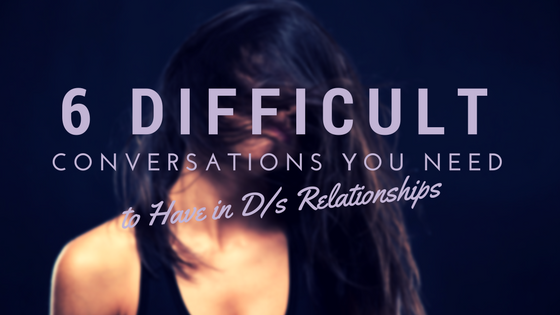 “I have something I need to talk to you about…”

Those are some loaded words, aren’t they? Most of us hear something like that and we think the end is near. I’m pretty sure I sent a shiver up John Brownstone’s spine when I said it the other day.

Instead of freaking out (not his style at all), he stayed calm and let me say what was on my mind. The conversation I’d dreaded having – mostly about my own anxieties and fears about not being enough and losing him – began as something he thought he’d dread too.

By the end, after I haltingly laid it all out there, giving us both something to think about and acknowledge, we felt better. Most of the time, that’s the outcome for any of us. We build up these conversations in our mind, imagine the worst thing our partner could say, and then keep our mouth shut for fear we might be right. In fact, assuming your D/s relationship is going well, you might make things worse by not saying something.

Not sure what these hard conversations might look like? Here are a few that are most common:

I’ll make a confession here. I’m terrified John Brownstone will leave me – through his own actions or because Fate can be a bitch. Either way, it’s something that can keep me up at night. Imagining living my life without him sends me into a spiral of anxiety. When things that happened in our lives made me face that fear, it wasn’t an easy conversation.

The upside to sharing my fears is that he’s taken extra steps to alleviate them for me. No one can promise forever, but he’s promising me now. Small things, like touching me more often, talking about the big important things, and sharing his own fears, helped me feel more connected and less afraid. But if I hadn’t said something, can you imagine how much worse I would have felt? Exactly. Which is why you need to have those conversations, too.

This one is hard, especially for submissives. Admitting we don’t like something makes us think we’ll hurt our partners’ feelings or make them angry. But why would you continue to pretend to like something you don’t? It’s dishonest and can breed resentment, and when they find out (because they almost always do), they’ll feel foolish. And don’t give me the “But they should already know” argument. If you don’t tell them, they’ll never know. Even the best Dominant isn’t a mind reader.

So what don’t you like? Certain tasks, rules, or responsibilities? Maybe those are there for your own good but you can renegotiate them. If you don’t like a sexual position or bit of kinky fuckery, you definitely need to say something. It’s one thing to do something you don’t love out of a desire to submit and serve (that’s where the “enjoyment” comes from sometimes). It’s quite another to do something you absolutely loathe. The best partners want you to enjoy your sexy times, too.

You might be surprised by this but even John Brownstone has a hard time telling me he’s angry about something. I struggle with this, too. Not saying something can start some weird passive-aggressive BS that doesn’t help anyone.

The important thing about sharing your anger is to do it in a calm way (when possible). Having an adult conversation about something that pissed you off will get you a lot farther than screaming obscenities at each other. Set up a time to talk when you’re calmer. If your partner can tell you’re angry, admit it, and ask to talk about it later. This was a hard thing for me to learn, but when he tells me to give him a little space and time, I do, and it makes for a more constructive conversation later.

The “I can’t” conversation comes in many forms. There’s “I can’t keep giving you the same level of Dominance” to the “I can’t kneel on the ground anymore; it hurts too much.” Having these thoughts can make you feel like you’re letting your partner down. You’ve done a certain thing since the beginning of your D/s relationship and now you just can’t even.

What you might think spells the end of your relationship could make way for a reorganization or new method to try. Sometimes the things you can’t do anymore are the things your partner doesn’t want or need as much as you think. But if you never say something, you’ll never know.

This one could go under the “I can’t” section, but I actually mean this in the way you probably took it. When one of you looks at the other and says, “This isn’t working,” it can be a devastating moment. Especially if you were blissfully happy the way things were.

If you’re the one thinking that the D/s relationship you have isn’t working anymore, you owe it to your partner to tell them. If you’re the one who has to hear this, don’t automatically assume this is the end of everything. It could be that you both did too much, too soon. It could be that your partner is overwhelmed in their vanilla life and the D/s thing is too much responsibility. It could mean they’ve discovered they have other needs to address. Yes, this conversation could be the end of things, but it could also be the beginning of a fascinating new part of your kinky journey, too.

Look, none of these conversations are easy. I know they aren’t. And it’s entirely possible that your worst fears are true – that you’ll confront your partner and they’ll leave or admit they were cheating or say they don’t want to do D/s anymore. I won’t sugarcoat things and pretend that won’t happen.

You never know what can happen simply by starting the conversation. You may find a new way to do the D/s thing. You may discover your fears were all in your head. You may end the relationship. But ultimately, you’ll be better off for it (yes, even if you can’t imagine it right this second).

Okay, over to you. Did I miss any other hard conversations that can happen in D/s? Share in the comments!