Update April 2018: We love Hot Octopuss so much we joined their affiliate program. Link at the end of the post.

First, I heard a loud buzzing.

What the hell was he doing?

We’d sexted our way through the day. He’d promised all kinds of kinky fuckery, most of it involving his tongue and my cunt. Even now, hours later, I was wet, my body relaxed and loose.

“I will taste that pussy tonight, girl.”

First, apparently, he wanted to play, with himself, which is always fun to watch.

The vibrations were loud. He didn’t care.

Finding the right position to get the best sensations took a minute. He didn’t mind.

And once he did, he was single-minded in his pursuit. Spreading my legs painfully apart, he dove down, lapping against my slit and sucking my clitoris. He flicked and teased with the tip of his tongue. He nipped with his teeth. His beard scraped against my skin.

I grabbed his head and held on, screeching and screaming. My thighs clamped together over his ears. He forced my legs apart, bruising my skin.

It’s not often John Brownstone is distracted from his purpose but a few times he forgot me as his head fell back, his eyes rolling back in his head.

After a while, he let go of my legs and covered my body with his own. The buzzing was now pressed against my pussy. He rocked back and forth. I wrapped my legs around his waist, angling my pelvis so that the vibrations pressed against my clit. While the sensations weren’t as strong for me as for him, I quickly found the exact right spot.

My body shuddered and jerked. Every muscle tensed. He watched me, a smirk on his face.

Until he forgot me again.

His mouth opened. His eyes widened. He shook and shuddered against me, the toy still wrapped around his cock, buzzing away.

Was he going to come? Was he close?

With a growl, he pulled the toy away from his body, tossing it on the bed, before sinking his cock deep in my pussy.

“Oh fucking God. I’ve never been this hard in my life. Ahhhh!”

He didn’t come right away. He had in me in three positions, thrusting and fucking like a wild man first, but when he did, he came long and hard.

About the Pulse III Duo 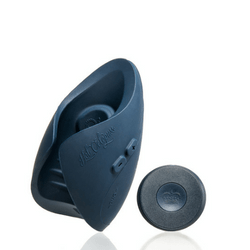 John Brownstone is no stranger to vibrations against his cock and balls. He’s pressed most of my toys against his own body because he likes that type and level of sensation. So when the chance came to let him try this one, we were all in. The Pulse III Duo by Hot Octopuss looks like no sex toy most of us have ever seen and surrounded his shaft with pulses and vibrations. It’s meant to be a masturbator for penises and can be used with or without lube. He didn’t use any (this time) but he could have.

What I can tell you from my perspective:

Here’s what he told me:

The Pulse III Duo can be used flaccid or hard. John Brownstone started out flaccid and was shocked at how quickly he became hard. A penis fits inside the opening in whatever way feels best – toward the tip, down at the base, and in whatever position does the most for you.

Hot Octopuss recommends playing with it by yourself before bringing your partner in on the fun. Every penis will prefer it in a different way. John Brownstone’s preference is for the Pulse to cup him under his cock. And I prefer it that way because it’s not every day that a Dominant man moans against your pussy or even forgets you because he’s so overwhelmed with pleasure.

He said multiple times that he didn’t think he’d ever been so hard or gotten there so fast. I have a feeling this one is now sitting in his nightstand as his new go-to toy.

Check out the Pulse III Duo!

Update April 2018: We love Hot Octopuss so much we joined their affiliate program.