In 2014, I was approached by a writer and editor for BearManor Bare who asked me to contribute a story to an upcoming anthology. The only requirements were to keep it short (around 2,500 words) and that it had to be about breasts. I could be as kinky and sexy as I wanted. 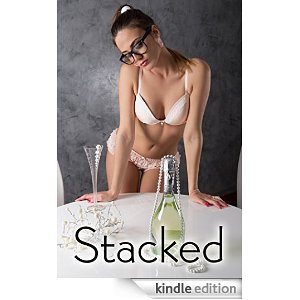 By December, my story, In Training, was written and sent off. Now, after several weeks of wondering and waiting, Stacked, an anthology with seven other authors all with one theme – BOOBS – is available for pre-order on Amazon and will be released on February 4.

No Sir and Babygirl story here. Get to know Marcus, a different kind of southern sir (lol, couldn’t help myself!) and Dahlia, his submissive pet, as he teaches her to orgasm in a whole new way.

Read the excerpt to decide for yourself. If it sounds good to you, go ahead and pre-order it. For you non-Kindle folks, if I receive links for any other formats, you know I’ll share them as soon as I have them.

Excerpt from In Training:

“I have a plan in mind, my sweet pet.” Marcus gave Dahlia a familiar look she could only ever describe as wolfish.

“Yes, Sir?” She’d learned over the past several months to show patience when he mentioned a new plan. She always found out eventually, even if it wasn’t in the way she would have expected. Asking direct questions and demanding answers never worked out well. The last time, he’d promised her a surprise the next day. When she’d demanded to know more, she’d thought in a sweet way, he’d told her, and then informed her, she’d lost her treat with her impatience. She’d gone without orgasms for a week that time. Dahlia always learned from her mistakes. She sat still, watching Marcus, waiting upon his pleasure.

“I’m gonna train you to perform a new trick for me, pet.” Dahlia waited, silent. “You’re gonna learn to orgasm when I touch your nipples. And only your nipples.”

Dahlia never understood why her breasts responded to Marcus more than every other part of her body. His Southern drawl poured like warm honey through her veins. The rasp of his tongue pebbled her skin and made her shiver. His touch and the feeling of his hands on her body melted her very bones.

No matter what he said or did, her body reacted the same each time. Her breasts became full and heavy. Her nipples tightened to the point of pain, thrusting forward in a clear invitation for attention. The scrape of cloth against her tender skin was almost too much to bear. She ached for his touch. arched her back without conscious thought of what she was doing, thrusting her breasts forward in an invitation.

Marcus always smiled, devil that he was, reveling in what he did to her body. He’d been training her to respond to him since the moment they’d met. Every time he whispered in her ear, he made sure his fingertips lightly skimmed across her beautiful breasts, a perfect fit for his hand. Whenever his mouth touched a part of her body – her neck, her earlobe, her wrist, any part of her body – he followed up with a taste or nip of her puckered areolas.

This new goal of his was icing on the cake. He’d dreamed of bringing her to orgasm simply by touching her nipples from the first time she’d ever orgasmed for him. She climaxed more easily than any woman he’d ever known. A few strokes against her clit, and she became a screaming, writhing banshee, begging for release.

“Go ahead, pet. Come for me” was his usual response. He loved the squeaks and whimpers she made. The sounds of her release were music to his ears, better than any symphony or rock concert.

But now, he knew what Dahlia hadn’t yet figured out. They would both have to forgo the immediate pleasure of her orgasms for the end result he wanted. His sweet submissive would learn to orgasm from the sensations applied to her nipples and breasts alone.

Dahlia cleared her throat, bringing Marcus back to the here and now.

“You have somethin’ you’d like to say to me, pet?”

She nodded, grateful for his encouraging smile. “When and how do we begin, Sir?”

Marcus chuckled. “It’s been goin’ on for a while, sweet Dahlia.”

It started out simply enough.

He kept her nipples sensitive to his touch. Lying in bed at night, he held her tight in his arms, her back pressed against his chest, her sweet ass nestled against his groin. Marcus would often roll her nipples between his fingers until she began to whimper. Within a few days, she began to wince and hiss as she dressed in the mornings; her nipples grazing the lace of her bra and protesting with sharp twinges of pain.

Every time he strummed her clitoris with his fingertips, he licked and nibbled her nipples. He wanted her to associate the pleasure in her feminine core with the pleasurable pain in her breasts. As she climaxed, he squeezed each nipple between his fingers, his hands practically crushing her sweet body. Dahlia’s orgasms were fascinating to watch – arched back, curled toes, every muscle in her body tense. The pain from his fingers only made her squeal and writhe even more. His sadistic side loved watching her struggle against the sensations, knowing full well she felt both pleasure and pain at his touch.

“Ahhh, yes, Sir, I had noticed the extra, um…attention you’d paid to that part of my body.” Dahlia looked away, blushing.

“Have you enjoyed it, pet?” Marcus wasn’t going to change his mind, but if need be, he’d adapt his plan. There were times when his pleasure mattered more than hers, but this wasn’t one of them.

Dahlia’s blushed deepened and spread across her skin. “Yes, Sir. I have.” She cleared her throat, choking on the words.

He smiled. “Now the hard work begins. Well, hard for you. Fun for me.”

Marcus didn’t give a definitive start or finish time for his plan. He knew that it would take time, and if he set an arbitrary date, Dahlia would stress over her “progress” and his plans would be delayed.

His plan was simple. Over time, he would simply stimulate her breasts, areolas, and nipples more and more, and her clitoris less and less.

“Yes, Sir. I’m ready whenever you are.” Marcus saw past the lip in between her teeth being worried to death and focused instead on her jutting jaw, a sure sign of determination from his sweet submissive. If he wanted her to do this, she would. He’d have to remember to keep her relaxed so her head didn’t take over for her body.

“We begin tonight, pet.” Marcus looked into her chocolate-brown eyes and cupped her cheek with one hand. With the other, he pinched her nipple until tears threatened to fall. “Prepare your sweet body for me the way I like.”

Does it sound hawt and yummy? Just imagine what the others wrote!

Pre-order your copy from Amazon now!