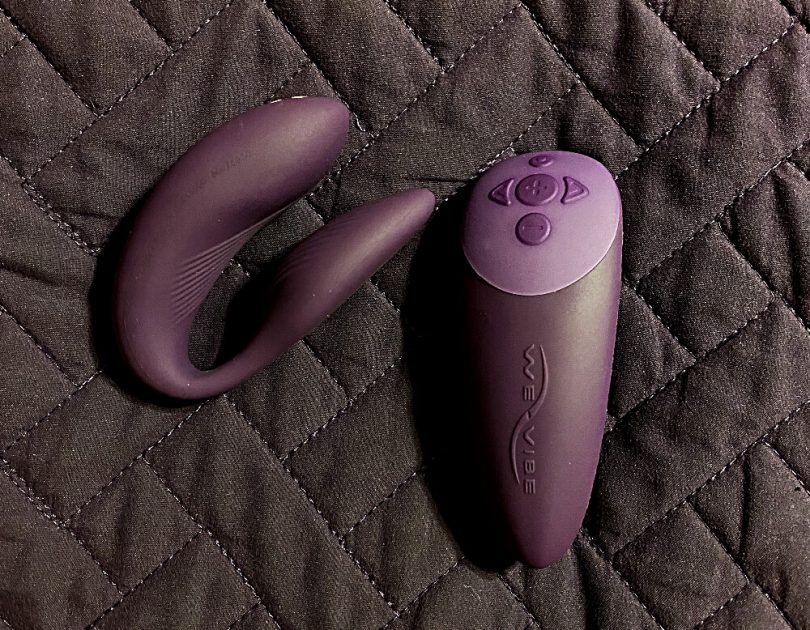 Going to Forced Orgasm City with the We-Vibe Chorus

I worried this was about to be very disappointing. That’s all on me — I detest awkward and uncomfortable maneuvers to make a sex toy “work.” I want everything to slide right in with ease. Yes, I know that’s not always reality, but you want what you want, right?

Lubing up the Chorus was awkward. I dipped the insertable end into our little pot of Butters lube, and even though I’d done zero warm-up on myself or with John Brownstone, went straight for insertion. The angle was wrong. The edge bumped against my vaginal walls awkwardly. It hurt a little bit. Was this going to work?!

Then we spent a few moments navigating our typical spooning position for penetrative sex, lube everywhere, and this foreign toy wrapped between G-spot and clit. There were a few ums, uhs, bumps, and “my bads” before we got it.

And that’s when the trip to Forced Orgasm City began, but of course, we were welcomed to the jungle as we went.

From a dick in pussy perspective, this is what the Chorus seems (in part) to be made for. The vibrations inside and out felt good, pleasant even when I put it in and turned it on. But once his cock made contact, I saw stars. I screamed. My ability to both draw breath and speak sensibly was gone.

Between my clamped thighs and his dick buried deep, both sides of the Chorus were firmly in place — with no place for me to run and hide. I was going to ride every wave of these orgasms until he finished, no matter what. Holy fuck. Would I survive without coming apart at every seam?

I bucked backward against John Brownstone’s pelvis. I grabbed the pillow. My hand holding the control reflexively squeezed, and I screamed so loud my throat went raw. The squeezable remote control turns up the volume on the vibrations, significantly. And with no way to turn or twist away from the intensity, I was forced to feel every second of it.

He grunted behind me with each squeeze. I practically sobbed, “I can’t, I can’t. No, I can’t take anymore.”

My “Yes, Daddy” came out in a gulping sob of pleasure. He groaned his own pleasure behind me.

I didn’t try to count the orgasms. I couldn’t even fucking tell them apart anymore. All I could do was hold on and hope I survived the ride. By the time John Brownstone came, I was breathing hard, sweat covered my body. The air around us smelled like sex, sweat, and sin.

Going Solo with the We-Vibe Chorus

As good as that moment felt — and it definitely did (I don’t think I’ve slept so well in ages) — I needed to know what it was capable of for solo use. Yes, the We-Vibe Chorus is built for two, but I prefer my sex toys to be multi-purpose whenever possible.

The remote took a moment to get going. (The instruction manual is handy here, FYI.)

Without the added pressure of his cock, the vibrations were pleasant but nothing to induce screams. I held it firmly in place with one hand which kept the pressure on my clit. It was pleasant, gentle even. Like getting a vulva massage. (Is that a thing? It needs to be a thing.)

The orgasms arrived slowly but powerfully. Toe-curling, body-clenching, breath-taking orgasms. They intensified as my cunt throbbed, squeezing around the inserted stem, sending me over the edge again.

When I lost my breath and the vibrations no longer felt quite as intense, I was done. Quick, easy, pleasant middle-of-the-day orgasms for the win.

Which do I prefer between solo use and couples play? Take me down to Forced Orgasm City…

About the We-Vibe Chorus 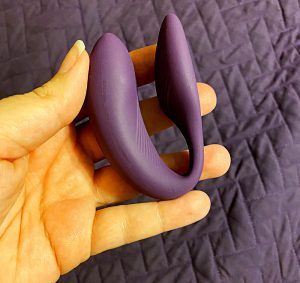 The We-Vibe Chorus is: