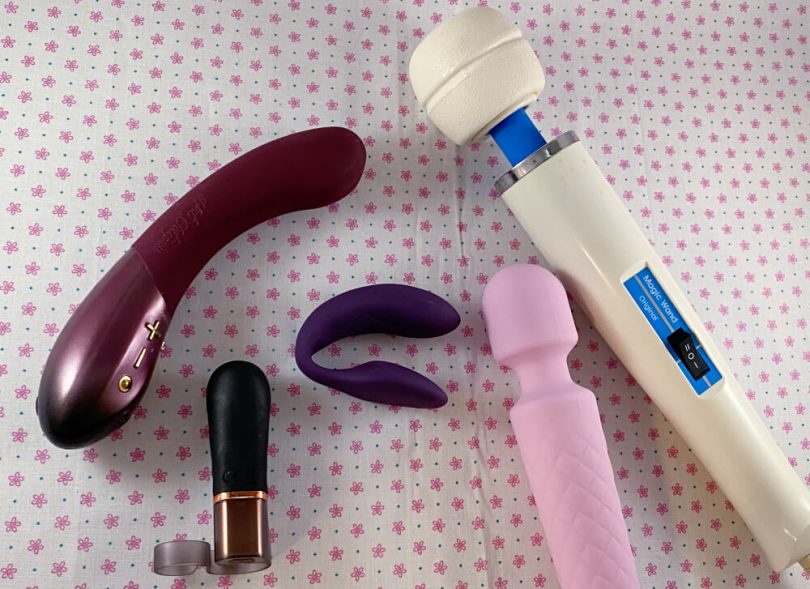 Disclosure: Affiliate links are included in this post. If you click a link and make a purchase, I make a small commission.

I’ve had the Pink B.O.B. in my nightstand since 2018 (review here). As long as I keep it charged (a perennial problem), it’s the perfect go-to for sleepy sex. John Brownstone reaches for me before the sun rises, and I reach for the Pink B.O.B. (unless I reach for one of the others on this list). It’s a small wand massager so it creates deep, rumbly, surround-sound vibrations without being too big, too loud, or difficult to maneuver. My clit isn’t the only happy camper here. My clitoral hood and labia have a good time, too.

Thanks to that wide head (something massagers are known for which is what I love about them), it doesn’t have to be right on top of my clit in order to get me turned on and get me off. When my clitoris becomes overly sensitive with too much direct stimulation, I can move it out of the way a bit and it still feels good. Even better, it’s big enough that even when my thighs are clamped down over it, I still feel everything.

HOLY SHIT WAS I WRONG!

Because it’s small, it’s easily maneuverable. While I (still) hate the damn buttons, it’s easy to hold and it gets down in the crevices quite nicely. And it’s strong enough that John Brownstone can feel it while he’s fucking me. Another thing I love about the DiGiT — and what sets it apart from the bullet vibe option, the Amo — is the rounded tip. Smaller than a wand massager (obviously), it still gives my clit the surround-sound experience I want. Feeling the rumbling above, below, and through creates much more satisfying orgasms.

One downside, as I’ve gained weight during the plague, my thicker thighs have made it hard for the DiGiT to hit the right spot every time. But that’s not the vibrator’s fault.

The latest addition to the clit cult (er, family) is the Kurve by Hot Octopuss (review here). This vibrator might be marketed for G-spots, but my clitoris is a definite fan. Also, the part of me that worried that I might never feel desire again, thanks to low libido, has a special appreciation for it, too. Using a toy for a review is one thing. Using it later because you really want to get off and that’s the toy you really want to use is something else. After so long with almost no naturally-occurring desire for anything sexual, it felt good to want to reach for the Kurve.

As for what my clit thinks, well, she approves. The bulbous tip is meant to be great for the G-spot but it also provides the surround-sound sensation I crave. And, like all other toys from Hot Octopuss, those sensations are pulsing, throbbing, and deep. Like the Pink B.O.B, I like the fact that I can hold it with my thighs and still get plenty of stimulation. I don’t know yet how it will do during sex with John Brownstone, but I’m (almost) eager to find out.

The Original Magic Wand (formerly known as the Hitachi) is the stereotypical forced orgasm toy that many kinksters will recognize from porny GIFs on the internet. You know…that flailing, screaming woman tied to a bed or with the Hitachi tied to her. The sensations overwhelm, and she can’t get away from them. Every orgasm will be wrung out of her until she can only beg for it to stop. That imagery speaks to my submissive self in SO many ways.

And I can report it’s as intense as it appears. I’ve screamed my throat raw. I’ve cried and begged John Brownstone to stop. It’s been too much and also just right.

My clit is as much a masochist as the rest of me because even knowing how much torture awaits (Hitachi’s are almost TOO MUCH power), I’m throbbing and clenching in my seat as I type this because I enjoy it so much.

John Brownstone bought this toy for me/us as a Christmas present back in 2013, so that’s why there’s never been an official review, but yes, I love it, even though yes, it’s too fucking much stimulation.

From that moment, I essentially have two vibrators pressed against my most sensitive spots and no way to get away from the orgasms rolling in on an insistent tide. The vibrations are nowhere as intense as the Hitachi, but because my clit gets overly sensitive quickly, it’s just as overwhelming. Yes I get off and that feels good, but what I love is that every orgasm after the first becomes a forced orgasm, and they continue until he gets off. My pleasure is quite literally at his pleasure, and my subby self laps that shit up, while my masochist side screams, “Is that all you’ve got?! Give me more! I can take it!”

Narrator: She can not take it.

Because I’m always looking for a new favorite to bring home to my clit, I’m curious — what are the toys you and your clit (or a clit you know and like) recommend?