I feel like a celebrity has come to visit for my second Shameless Promotion in one day!!! If you don’t know Genevieve Dewey, now’s the time to get to know her! Oh, and she’s REALLY nice (and sort of hilarious) on Twitter…just sayin’…So her book is due out in October (the day after my birthday!) and today’s the Cover Reveal – with an excerpt at the end of the post! And if you haven’t picked up her other books, now is a good time! And now, drumroll please…Third Time’s the Charm! 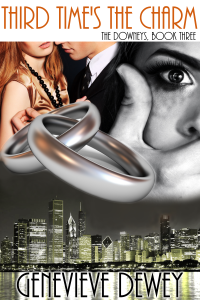 Once to Begin, Twice to Bind, and Third Time’s The Charm…

Of all the things Mickey Downey has accomplished in his life, successfully quitting his vices is the one thing he hasn’t been able to master. For the first time Mickey is free to have both Mary and Tommy in his life but yet he’s never been closer to being pulled back into the criminal world. While Tommy, Ginny and James work overtime to expose a nefarious plot threatening all of them, Kiki and Maeve Downey are hatching their own plots to make Mickey’s dreams come true. With shenanigans afoot in every aspect of Mickey’s life, he may be forced to pick up the weapons he promised Mary he would leave behind in order to protect his children. Can Mary finally accept he might never truly be free of it or will Mickey’s enemies once again succeed in tearing them apart?

Strap yourselves in for the rollercoaster conclusion to The Downey Trilogy!

First, I Love You . Second of All . Third Time’s The Charm

About the Author:  Genevieve Dewey is the author of The Downey Trilogy (First, I Love You, Second of All & Third Time’s The Charm) and the short stories Bird Day Battalion & V-Day Aversion. She is a wife, mother, sister, friend and Anthropologist. She was raised mostly in Nebraska, partly in Arizona. She has a Master’s in Anthropology and worked as an Applied Anthropologist for years (even ran her own research company for a while) before deciding to be a stay at home mom. She loves passionate (rational) debates, reading, and libraries… oh, and Chicago and high-heels and chocolate and target practice and gangster flicks and anything with the FBI in it and run-on sentences. She lives in Nebraska with her three brilliantly diabolical children and one incredibly funny husband.

Mary lifted her head and stared dully at his body lounging against the door frame, hands in his pockets, as usual. She was so permeated with emotion and memories and her eyes stung with that dry wetness of too many tears, she couldn’t bother to feel shame at being caught. She said the first thing on her mind.

“You—you never sent them,” Mary stopped and swallowed. “How come you never mailed them to me?”

Michael came and sat on the bed next to her. When the mattress dipped to accommodate him, her hip tilted into his and she put a hand out onto his thigh to brace herself. His left hand reached out and covered hers, tracing the faint wrinkles on her knuckles. His other hand reached across and gently took the box from her lap.

“I didn’t know where you were. But even if I had, I wouldn’t have. I couldn’t. They were never meant for you to see. I thought by writing them I could somehow exorcise you from my heart, get the memories out of my head.”

“But… After you found us and you started writing Tommy…”

“It was easier with him. There was no resentment and pain with the guilt, just love. We’re family. It was my duty as his father to make sure he knew his siblings at the very least. When I wrote to him it felt like a gift. With you…” his voice trailed off and she could tell by the tightness in his tone he was battling his emotions. “I knew after I saw you again, there would never be a day when I didn’t love you. And I no longer wanted to cut you out of my heart.”

She turned her head and looked into his eyes. They were bloodshot but otherwise dry.

“Oh, Michael,” Mary’s voice broke and his face blurred again from her tears. She wiped them impatiently. She moved her body so she could face him more directly. “Don’t you know how much I would have given to have known even half of this?”

His lips tightened and his gaze dropped to their hands.

“I thought you did know, Mary. I tried the best I could to show you what you meant to me. Words are cheap. I spent my days lyin’ to people. You know I’m damn good at it. I thought, with you, the words weren’t as important as showing you. When we were together in Brooklyn, you had all of me. All of the real me. The rest of the world had the smoke and mirrors.”

She reached up her hand and laid it flat against his chest. His heart was racing. He grabbed her hand and pressed it to his lips. She scooted closer and laid her head against his neck. She could feel the sinews of his muscles and bones and his breathing seemed labored.

“Spend the night with me. We’ve wasted so much time. You said you came for me. I’m tired of this dance, so tired,” Michael stopped. She lifted her head and watched him grit his teeth before he continued. “I’m done with it. Done with being a gentleman. We can go on as many dates as you like, but I’m not going to be under the same roof with you and not have you in my bed.”