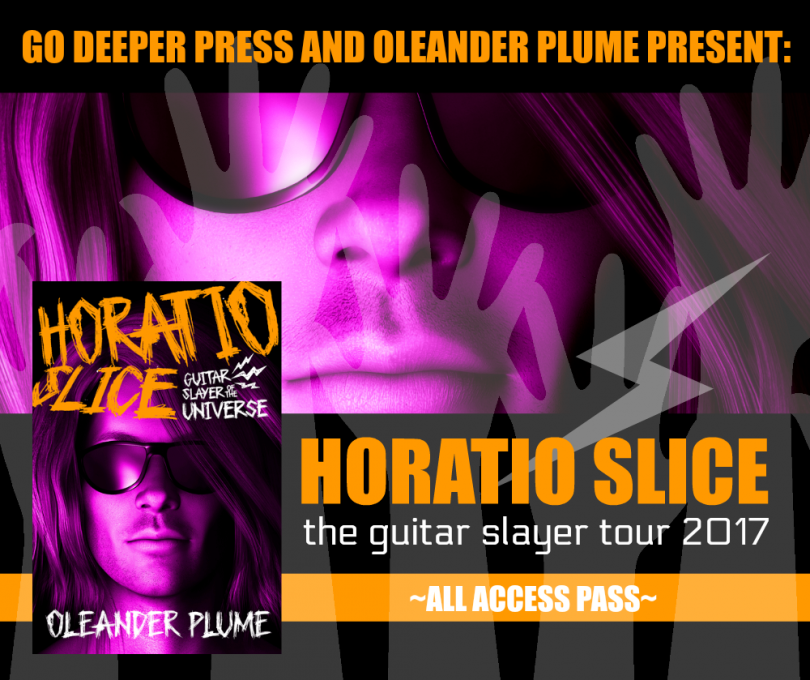 Oleander Plume is an amazing writer and person. She and I have been blogging buddies for a few years now, and I’ve never read anything by her that didn’t make me squirm in the best possible way. So when I found out that she has a new book release and was looking for blog tour hosts, I was in! And just for us, she wrote a piece of flash fiction aka amazing kinky fuckery which just proves she’s a woman after my own kinked up heart. Take a look and if she melts your bones as much as she does mine, make sure you get a copy of her new book!

The following is a new piece of flash fiction I wrote especially for this post. I hope you enjoy!

Naked in the Rain

Perrito’s sky, normally a vivid blue, appeared to be covered with a grey veil. Wind kicked up and scattered dry leaves in all directions, one of which caught the eye of puppy Canis. Yapping ferociously, he gave chase. Gunner watched him disappear behind a flowering shrub.

Gunner watched a puddle of rain collect in the cleft of Horatio’s chin. He had an urge to lick that puddle away, but hesitated. “What about Canis?”

“Canis. The pup who turns into a werewolf. Pretty sure he’ll be fine.”

“Now you’re thinking like me.” They peeled off their clothes and left them in a sodden heap on the grass. Gunner licked beads of water from Horatio’s chest and belly button before dropping to his knees. “No fair. I wanted to suck you first,” Horatio said, brushing Gunner’s wet hair back.

“Too bad.” Gunner ran his tongue over the length of Horatio’s cock while staring up at him, squinting his eyes against the rain. He liked the way Horatio smiled, and the way he pushed ever so softly against his face. The sound of a tree branch snapping made him freeze.

Gunner’s mind raced. Who was watching? Did he even care? He worked over Horatio’s cockhead with his tongue, slowing his pace in an attempt to look sexy.

“That’s it, Gun. Show them how fast you can make me come.”

Them? Were more than two watching from behind the trees? Gunner’s whole body throbbed with excitement, especially his balls. He heard another branch crack followed by the rustling leaves.

“Probably just the wind,” he thought. Or Suki. Maybe Suki and Stiles. He imagined the pair stroking each other off while they watched him suck off Horatio. A piece of long grass tickled his inner thigh. He heard a sharp inhale from Horatio when he reached down to move it away.

“Yeah, baby, touch yourself,” Horatio whispered. Feeling dirty and hot, Gunner ran his fingers up and down his own dick, and shivered. Fuck, it felt good. “Damn, I can’t see.”

Gunner leaned back and watched himself fuck his hand. The rain had turned into a light mist that coated his skin like oil, making his cock slippery. Horatio’s groans almost drowned out the thunder rumbling in the distance.

“You’re so fucking sexy,” Horatio said, now stroking his own dick. “I’m going to come all over myself.”

“Gimme.” Gunner kept jacking off, but moved his head forward and stuck out his tongue in time to catch Horatio’s deluge. The taste, the scent, and the feeling of being watched proved to be more than Gunner could take. His orgasm left a tingly sensation behind, like maybe he needed more.

Snake appeared. “You boys! Damn, my bits hurt,” he said, rubbing his crotch. “Got any more left in ya?”

Horatio knelt next to Gunner and grinned at Snake. “That’s a stupid question, vampire.”

Horatio Slice is NOT dead.

Gunner Wilkes knows a secret. Heartthrob rock star Horatio Slice is not dead. Sure, Gunner may turn heads with his big brain, good looks, and gym-built body, but his mind is on one thing only: returning his all-time favorite rocker and secret fanboy crush to Earth.

Yes, there are VAMPIRE PIRATES

Fame and stardom were starting to wear thin for Horatio Slice, but when he was sucked through a magical portal while on stage at Madison Square Garden into a jail cell in a strange dimension called Merona, his confusion quickly cleared upon meeting his sexy, dark-haired cellmate, a vampire pirate named Snake Vinter, who filled Horatio in about life in the universe, jumping from dimension to dimension, and craftily avoiding the wrath of gnarly-mask-wearing leather queen King Meridian—a guy nobody wants to cross.

The metal ship is named Frances.

And on Snake’s metal ship live eight identical blond Humerians, who proudly display their cocks and assholes in carefully crafted trousers, as well as a wild assortment of untamable, cock-hungry travelers and stowaways. But someone has hacked into Frances’ mainframe, demanding that Snake and crew deliver Horatio Slice to King Meridian, or feel his wrath.

Sounds good, right? Get yourself a copy today!

Want to get to know Horatio Slice a little better?