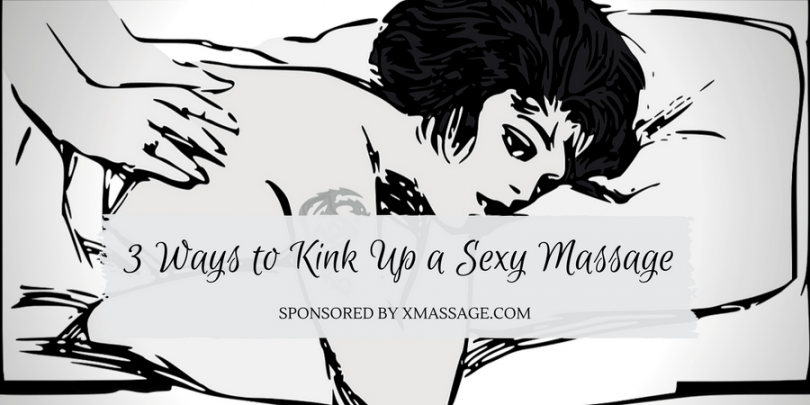 I’ll admit that the only thing I knew about a sensual or sexy massage prior to meeting John Brownstone was limited. It usually involved 30 seconds of my now ex-husband kneading my shoulders like I was a ball of pizza dough before saying, “You wanna…ya know?” Wink, wink, nudge, nudge.

I was in my early 30s before I discovered the delights of having my entire body rubbed, stroked, and touched just for the sake of doing it. Not for whatever my partner might get later.

And what I learned fairly quickly is that it can be kinked up just like anything else.

Note: For me “kinked up” involves an inherent power exchange. Your type of kink might not. Kink away, y’all, in whatever way you enjoy.

The first time John Brownstone gave me a full body sensual massage, the first (and only) command he gave was, “Don’t move.” At the time I thought that would be easy. How hard could it be to lie still and let someone’s hands roam your body?

Harder than you realize. He began innocently enough — arms, legs, thighs. It was when we moved to my torso that things got difficult. You’d be forgiven for thinking it was the attention he paid to my breasts and nipples or even my vulva.

Actually no. I wanted to squirm (with delight) as his hands traveled over my stomach, down my hips, and across the crease where leg and pelvis meet. Those areas get damn little attention, and the sensation was decadent.

Of course, getting off during a sensual massage supposes that you’re being stroked just right and that you can orgasm in that position. Hit my clitoris just right, and oh yes, I can, and yes, I will.

Unless of course, a certain Dominant partner tells me I can’t, and then proceeds to tease that part of my body mercilessly. Yes, I love it because orgasm control is one of our kinks. But also, by the time he lets me come, I’m usually ready to explode. Which, of course, is the entire point.

Now, this kinky option only works if an extra person consents to being watched, too. But if you or your partner get off on the voyeuristic and exhibitionist side of things, watching one or the other stroked and massaged by someone else is an option. You can set the scenario between you. Are you submitting to your Dominant’s whim of watching you with someone else? Is your Dominant “forcing” you to watch someone else please them? The kinky fuckery scenes can be anything.