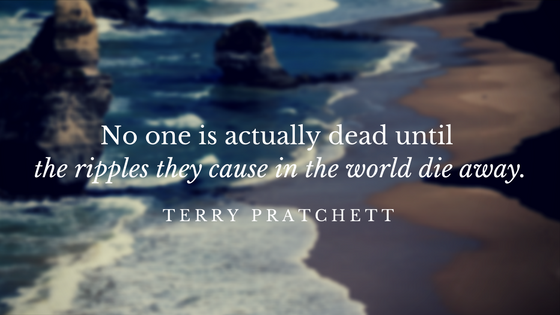 I have two best friends – not including John Brownstone. They’re closer in age to my mother than to me. They both entered my life at big turning points where I had to decide to go this way or that. They watched me do stupid stuff and loved me anyway. They are rocks in my life, immovable, sturdy, solid, always there.

They’re the type of friends you don’t have to talk to everyday. Hell, we’re all too busy for that anyway. When we see each other in person, sometimes once a year, sometimes less, it’s as if we’ve been apart for five minutes. The two of them were supposed to finally meet each other, these two great influences in my life, in October at the wedding.

One of my best friends died last night.

She told me about her cancer diagnosis at Christmas and two months later, she was gone.

“Just be your sarcastic, snarky self and make me laugh.”

It’s the only thing she ever asked of me. Ten years of friendship and that’s all she wanted.

I tried. I really did. But I thought there was more time. I thought I’d see her later this month. I thought she’d be at the wedding – worse for the wear, of course, but there because she was a fucking warrior.

She taught me how to be a single mom. She was the friend she wished she’d had during her divorce 20 years before mine. She showed up even when I didn’t know I needed her. She wouldn’t let me pay for anything. She included me in her family. She was everything to me at a time when I thought I had no one.

What did I give her in return? I don’t think it was very much. Certainly not comparable.

Her daughter, a few years younger than myself, called me yesterday. They sound so much alike I thought it was her. I was ready to give her hell and make her laugh. Instead, it was a terrified young mother watching her own mother die.

She let me say goodbye because she knew how much we meant to one another. My friend, through moans of pain, wailed, “I don’t want to say goodbye yet!”

But I didn’t lie to her and tell her she’d beat this. We both knew this was goodbye.

After the call ended, I collapsed on the floor, sobbing, trying to call John Brownstone. He was where I couldn’t reach him. I was alone. I haven’t been truly alone in a long time, in part because before there was him, there she was. The birth of my youngest. The day my ex became violent. The day I met John Brownstone.

My mind clicked off. I don’t know a lot about disassociation, but maybe that’s what happened. I went back to work. I took a phone call and did an interview. I planned dinner. I started packing for London. Tears trickled slowly and silently down my cheeks through most of it.

She answered for me, without even knowing it.

I got the text late last night. She was gone. The service won’t be for another couple of weeks.

I cried again. This time, John Brownstone was there to catch me.

Then I stopped again. Can you be both numb and filled with guilt? Maybe so.

I still don’t have an answer to that. She was the shirt-off-her-back, help-a-stranger, do-the-right-thing-no-matter-the-cost kind of person. She was better than almost anyone I know, especially me. Maybe I was never meant to give her what she gave me.

Maybe the legacy is that, hopefully, I can be that type of friend for someone else. Be the support, be the rock, be the cheerleader – all without asking for a damn thing in return other than friendship.

I’ll go to London because sometimes the only way to survive is to throw myself into something else. For a few more days, I’ll pretend there isn’t this new reality with a big fucking gaping hole in it.

But goddamnit, I miss my friend.

This is probably my most depressing Wicked Wednesday ever. If I brought you down and you need cheering up, you know where to go. I don’t want to be the downer this week, but I also need to feel connected to something and someone, and this sex blogging community of ours is a good place to not feel so fucking alone. So here I am…