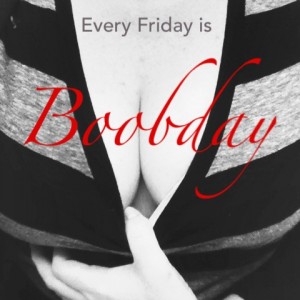 How’s that for a title? If you’re surprised at what you’re about to see, at least you can’t say you weren’t warned.

So first, the bad news. No podcast this week (cue sad music). I admit that time got away from me so putting one together would have been one of those late night projects, but that’s not the reason there’s no episode.

Poor John Brownstone got hit hard with a sinus infection. I’m talking this thing knocked his ass out.

On Tuesday, he said, “I have a tickle in my throat and I’ve been sneezing. I think I’ll take NyQuil tonight and DayQuil tomorrow to get ahead of this thing.”

By the next morning, he couldn’t breathe through his nose and he could barely talk because of his sore throat. I had to call his boss for him (which felt weird) and his doctor to make an appointment. He slept all day Wednesday and most of the day Thursday. I’m the big meanie who woke him up for his doctor’s appointment (and rewarded him with a post-visit milk shake, by the way) and to take his medicine and get some fluids in him.

There was no way I was going to ask him to edit the episode for me like he always does. And my perfectionist self can’t release an unedited one. I just can’t do it!

So, instead, back to an old favorite. Boobday!

I took a picture of my boob this past weekend after I was handed one of my nipple charms and told, “You will wear this today and think of me while you’re writing.” And I did.

I’ve become more sensitive over time (for whatever reason) so I really felt this thing. What I love most about it is how pretty it is. 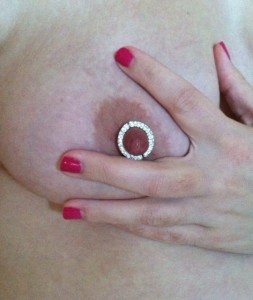 While, yes, I have large nipples, they wouldn’t get hard for me (no matter what I did) so what you’re seeing is a nipple charm desperately clinging to a not-so-tight nipple. Normally, the charm looks bigger in proportion to the nipple.

Anyway, my boob is the consolation prize this week. Now, go forth and enjoy more boobs in honor of Boobday!