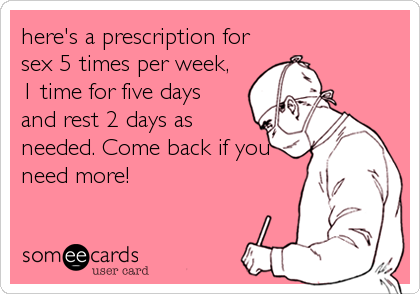 I can’t speak for every D/s relationship out there. I wouldn’t even want to try. But I can speak for John Brownstone and myself, and let me tell you something – it’s not all sex and kink all the time. Sometimes, there’s almost no sex at all. (Cue sad face)

When things are “normal” – meaning it’s a typical work week, typical school week, and typical life, he and I may have sex once or twice during the week. We’re always Daddy and babygirl, and the tasks I have keep me going. At night, before bed, there’s almost always a little bit of kinky play – but it doesn’t automatically lead to sex. We kiss and hug all the time. We look for reasons to be close or touch one another. But the reality is that we don’t have a shit ton of sex.

First of all, that’s not a complaint (okay, maybe a little, but not in a bitchy way). Second of all, when it’s not a usual week – we have time off, the kids are away, something’s different and we simply have more time – we might have sex multiple times or up the kink a bit and get a little wild. That’s life. All of my kinky friends in their own long-term relationships already know this. D/s isn’t all sex, all the time.

Right now, for the month of October, we’re in a weird state, and it’s messing with our ability to have All The Sex.

Daddy has dental surgery this month (three days before this post went live, actually). We don’t know how long the pain will keep him down or how he’ll feel after the first couple of days.  All we’re both sure of is that there will be no sex or even play for several days, maybe longer. My job will be to keep him medicated and make sure he has soft foods that don’t require chewing, not to get him all worked up – unless of course, he asks me to do that. Rawr!

A week after his surgery, I’m getting my IUD replaced. It’s Mirena, which means it must be changed out out every five years. All I remember is that it’s supposed to be replaced in October. What date did it go in five years ago? Hell if I know. But as someone who can get pregnant if a single sperm looks at her cross-eyed, we’re taking no chances until I can ask the doctor when the new one should be effective. Not quite forced celibacy for the month of October, but between his procedure, my procedure, and the end of my birth control’s life, we’re being very careful.

The month of October isn’t exactly a sexy month for us. Hell, just the procedure for the IUD replacement alone will make me feel bad for a day or two. Then there’s John Brownstone’s own recovery. If it doesn’t go well for him or the pain lingers too long, it could be a long dry spell for both of us. (If I dope him up on enough pain meds, he probably won’t mind too much, lol.)

My birthday is at the end of the month (October 30 if anyone cares) and he’s taking two days off work, partly to celebrate, partly because he’s ready for some time off. I think we’re both looking at those two days as an opportunity to reconnect and get freaky. By then, we may have an entire month to make up for.

A lack of sex because real life intervened and how we make that work for us is probably the truest picture of D/s you’ll ever see – no matter what couple you’re looking at. Yes, most of us in long-term, D/s relationships would kill to have more sex, get kinky more often, and walk around naked a lot more than we do. But those times are rare.

For those new to this (and I know you’re out there), accept that now. The sex will probably be much better than what you might have had before, but unless your life changes drastically or you’re partnered with someone who doesn’t let things like work, kids, or exhaustion stop them, it probably won’t happen as often as you think it will.

And when you go through a dry spell, enforced or not, it only makes you appreciate the time you get with each other even more. The pent-up energy of too long without kinky sex is pretty explosive, which might even make up for the lack of frequency.