Anyone who’s been hanging around this kinky corner of the world may recognize the name Suzy Ayers. She’s been featured here a few times, and she and I are in at least one anthology (and it’s free!) together. Now, she’s back with a new short, kinky read! (Yay for kinky reads!)

Her new release Fantasy Encounters…Further Explorations is available for pre-sale on Amazon right now and will be available for purchase on March 15. Take a look, and if this gets your juices flowing, pre-order your copy today! 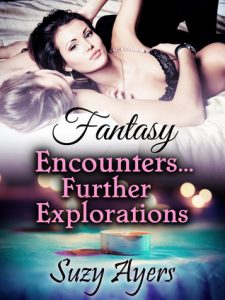 In this sequel, Keira learns her not so frugal ways will get her into trouble, and she is given more than a verbal warning. They’ve been struggling with the idea of an open relationship; however Keira was not prepared for Tim’s reaction.

Keira receives a Christmas Present that she would’ve never imagined was allowed from her macho man husband, in “Keira’s Christmas Present”. It makes her wonder what other secrets her husband may be hiding.

Keira also learns that a honeymoon is always better when sharing with new friends in “Second Honeymoon”. She wonders what she has awakened within Tim, and who will be returning from the beachy island.

He was sitting in the living room with a sour look on his face. Like a sullen child Keira quickly babbled out her excuses, when she knew there weren’t any. She’d never spent like this before, she’d always been the responsible one—the saver.

“What?” Keira almost whimpered out the word. She’d seen women have their hands hit before and was not looking forward to it.

Keira screeched and pulled her hands away, rubbing them, his mere expression had her return them and endure the five more per hand.

“That is for the total cost of the day. Now a spanking for doing something we have already discussed.”

Pre-Order Your Copy on Amazon!

Her main focus is Romance, which crosses many genres including: Erotica, Fantasy and Paranormal. Her short stories and books twist into happily-for-now or happily-ever-after’s