I was feeling a little mopey and sorry for myself the other day. John Brownstone and I had a silly little argument. I hadn’t slept well. Ya know, life.

Then, I go online, look around, and see two amazing things, all in one day. 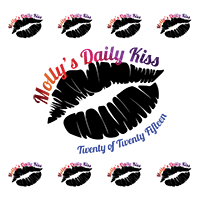 For the second year in a row, I made Molly’s (of Molly’s Daily Kiss) Top 20 of 2015. Each year, she thinks about the sex blogs that spoke to her, caught her attention, and said something of value to her. And for some crazy ass reason, mine was one of them.

It’s strange and humbling to know that other people read my writings (or listen to podcast episodes) and think anything other than, “Is this chick bat-shit crazy or a kinky sex fiend?” (I’m both, if you wondered.) I adore Molly and admire all that she does. To anyone who thinks I never stop, you should go check out all that she does for the sex blog community. Damn.

Now, you already know me – it’s why you’re here. Do me a favor: Click the link below, check out the list, and go find some new-to-you and oh-so excellent sex blogs to follow.

If that wasn’t enough for one day, I found out this happened…

It’s been my worst selling book, which cracks me up because I think it’s kinkier and better written than Sir and Babygirl (and yes, I include the third book in that assessment). Eh, if I wrote just for the book sales, I’d be a very sad (and poor) writer.

Nominations are still open for other favorite kinky books, and I’ve seen several authors I know are excellent included in the list. I won’t win, but I don’t care. I never would have imagined being nominated in the first place.

All I can say in response to the good news and honors is that I’m humbled and “Thank you.”

Thank you for reading and then coming back for more.