I read The Mark by Arla Dahl several months ago, book one of her Immoral Virtue series. It was steamy and dirty, and oh so freaking good. I get shivers just thinking about that one. When I found out that the third book is out (and how in the hell did I miss book two?!), I had to share.

I’m pretty sure if the Salem witch trials offered these kinds of tests, less witches would have burned. Well, they might have burned but in a completely different way. 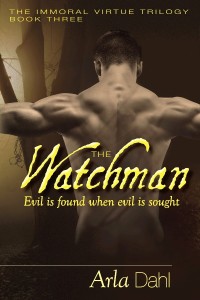 Evil is found when evil is sought.

For when those in authority neglect to reprove sin,
then very often the good are punished with the wicked.”
– Heinrick Kramer, 1486, The Malleus Maleficarum

For yielding to the proud tears of an accused witch, The Watchman’s soul may have been blackened by evil. To prove himself unmarked, his body free of the witch’s branding, he must stand naked before all and submit to the governor’s thorough and shameful examination.

Though Giles Scott would resist the governor’s practiced and patient touch, only complete abandon might prove his innocence. And since the witch cannot feel, only Giles’ arousal can spare his neck from the noose. And so, he surrenders.

Yet screams from another chamber—perhaps pained, perhaps pleasured—awaken memories from Giles’ dark, torturous past, and the governor’s touch no longer teases but stings…much like the punishing bite of a whip against the flesh of THE WATCHMAN. 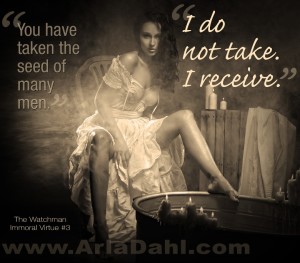 Excerpt from The Watchman

“You will take all I give, Mercy,” he said, feeling the stone shift in his hand as her muscles clenched around it, seeming to hold it in place. He eased the pressure, willing to move slowly, yet unwilling to stop. “And you will hold it within.” He would take her as high as he could, let her linger in that place where passion stood just out of reach, a breath away, until he need only say the word for it to consume her.

He pressed on, fed the thick plug into her slowly, the stone flaring wider toward the middle, smooth and rounded. He added more oil at its widest part, letting it drip onto her and pool where the stone and her body joined. Then he eased it further inside of her, stretching her bit by bit.

Her moans, her sighs, were gruff, pained and needy. Her buttocks clenched, her muscles tightening upon the stone, seeming as much to expel it as to submit to it and permit it inside.

He eased the pressure. “Breathe,” he said, and waited for her to calm. “Accept it all…take every inch.” He started again, pushing gently, a constant force further stretching her, slipping now easily since the fattest part lay firmly within her, and then on until only the flattened base remained. A wide disk it was, pressed against her anus, holding her full and fleshy cheeks apart where it sat.

He pressed his thumb to the base it to be certain it could go no further but that she had accepted it all. Then he smoothed both hands over her rump, the oils on them making her flesh shimmer. Bringing sighs from her as her body adjusted to the cold, hard intrusion.

He helped her to her feet and she rose slowly, stiffly. “Clasp your hands at your back,” he said, and when she did, he beckoned her forward with the crook of his finger. Forcing her to walk toward him. To struggle with and against the sensations of the thick stone wedged so deeply inside of her.

Desire built in her eyes, showed her need rising. But a witch, so stirred, would have need for more. A greater touch, a harsher hand. Unable to control herself, the witch would be. Ever seeking release, for it would be found only at the pleasure of the most evil one of all. Not by a mere man, no matter how experienced his hand.

He stepped back again and she advanced further, slowly, her hands still clasped at her back, her breasts thrust toward him, her long supple legs shimmering in the firelight.

She reached him again and he remained where he was. She took another step, stood so close her nipples brushed his doublet. Eager points, they were. Hard, dark. Still sore from the clamps, he was certain. He wished to test them, to pinch them again, clamp them once more, and see how well she withstood the sensations. Her needs, so great, too great…

He did not ease back from her, did not touch her. His desire instead to rouse her to the brink then let her manage the fall of it, control it, and prove herself able.

Slowly he lifted a hand, cupped it to her neck, then tipped her chin up with his thumb. “I wish you to feel it well, Mercy.” He touched his other hand to her full soft hip and leaned closer to her, crushed her lush breasts to his chest. Whispered softly into her ear. “I wish to know how it rouses you, teases you…pains you.”

“It pains me most terribly,” she said and he believed her words, “for it makes me crave…”

He drew back from her then, just enough to still feel her heat. “You will suffer that craving,” he said, “until I say it may be satisfied.” He stood aside and the smallest of smiles flickered upon her lips as she looked at the pillory behind him.

He pulled the pin from the eyebolt then lifted the hinged top. “Your pleasure is known to many,” he said as she settled her wrists into the smaller grooves. “Your need so great you render men unable.”

“Nay,” she said, her voice a whisper. “Pleasure well spent is slow to return.”

He pressed a hand to her back, forced her forward, to bend at the waist and place her neck into the larger curve.

She did not resist.

He lowered the top and locked her in place. 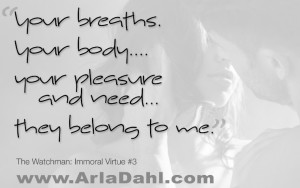 A New Yorker, born and bred, Arla is forever fascinated by the varied cultures of her city – and the exotic foods that go along with them with their lush flavors and provocative scents that tempt and tease and satisfy. Beyond its rich diversity, the close and heady feel of a moody late-night jazz club is Arla’s favorite part of living in New York.