What do you think of…naughty fairy tales? Rawr, right?? Okay, check out her newest release, Jack and the Jean Stock, and if it gets your motor running, make sure to get a copy of your own!

Jack and the Jean Stock 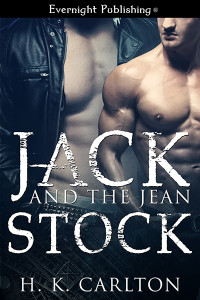 Strapped for cash and drowning in his ailing mother’s medical debt, the one bright spark in Jack Castor’s life is working his dream job for a specialty clothing manufacturer that caters to large men. Although his personal life is all but nonexistent, career-wise, he thrives under the tutelage of his friend and father-like mentor, Cronus Gigandet, a gigantic man with a heart to match. But when Cronus dies suddenly, the company’s future is thrown into uncertainty.

Titan Gigandet, Cronus’ wayward son, a giant of a man in his own right, is furious when he learns his father has included his upstart protégé, Jack, in his will, leaving him equal shares in the family-run factory. Reluctantly, Titan rescinds his own self-imposed exile and returns to a company in turmoil.

The gloves come off, and the major players fight for control. With the shareholder’s agreement about to run out, decisions concerning the business need to be made, and quick. But Jack and Titan clash at every turn. The pair is so at odds, the quarrels rapidly become physical, but fists soon give way to angry, forbidden kisses. Though the blazing new attraction does nothing to quell the antagonism or distrust between them.

While battling to save the company, Jack’s mother takes a turn for the worse. Just when it seems like all hope is lost, Titan unearths a stunning find.

Could this new discovery be Jack’s ‘golden goose’ or just the beginning of the end to everything Jack holds dear?

Excerpt for Jack and the Jean Stock

Titan followed, stripping out of his shirt before joining Jack on the bed. “Your bed’s kinda small, Castor.”

“You’re not exactly small either. You’re the biggest guy I’ve ever been with. It’s hard to find one my size to play with.” The corner of his mouth twitched adorably.

“Oh, you’re admitting you’ve been with other guys now?” At his sudden glower Jack added, “You’re my biggest too.”

Another slow grin spread across Titan’s face. Good, he was relaxing once again. Jack took the opportunity to continue where he’d left off in the living room. But this time instead of softening him up by massaging his chest, he went straight for the goods. He unfastened his trousers once more and stroked Titan’s magnificently huge erection.

“God you have a nice cock,” Jack breathed, in awe of the fine specimen before him.

“For a freak?” Titan mumbled.

“What?” Jack slowed his caress. “Who called you a freak?”

“Most people only want to check me out because of my strange proportions. It’s like a fetish to some.” Are you like that went unasked.

It didn’t take a genius to realize Titan had been hurt, used, tossed away. “We’re not so different you and I,” Jack said.

Determined to make his point, he jumped off the bed and removed his pants. Titan watched him hotly, just as he’d hoped. Not at all ashamed, he was totally at ease with his body and his sexuality. He fisted his erect cock and pumped it a couple of times. Ti’s lips parted.

“Let me show you.” Jack coaxed Titan out of his trousers and boxers.

Facing the bigger man, he straddled his thighs and inched upward, while still stroking his length. “Hold him up there, big boy.” At the directive, Ti’s entire large frame quivered, through nervousness or excitement, Jack wasn’t sure.

Ti wrapped one long finger around the thick base and using his thumb on the underside, held his cock up next to Jack’s. He shifted his hips, causing their velvety flesh to rub together. They both gasped at the sensation.

With both hands, Jack corralled their cocks, lining them up: crown, shaft, balls. The visual was fascinating and by the look of rapture on Ti’s face, he wasn’t the only one who thought so. “You see, we’re not so different. Silk and steel.”

“Then get ready to get your freak on, Gigandet.” Jack dragged his hands up and down, essentially giving them a dual hand-job.

The big man swallowed audibly, his gaze riveted to the action.

Lowering one hand away, Jack gripped the twin erections.

Together they were so thick, he almost couldn’t contain them. For a moment he remained absolutely still, watching, upping the anticipation in himself and the barely harnessed tension he could sense in Ti. His thighs were like granite under Jack’s buttocks. He wanted to blow his mind, erase any and all bad memories and encounters he’d obviously had with other men.

Ti’s cock pulsed, which made Jack’s jerk. With their shafts pressed so close, he could share the other man’s every response. Every twitch, every throbbing pulse, the very juices racing just under the thin skin, preparing to explode. It was sensory overload at its best.

Slowly, he shifted in an upward motion, sliding their smooth rods together. Ti swallowed a moan. His eyes rolled and closed briefly before he stared once more.

Applying a little more pressure, using the tip of his cock, Jack lifted his hips again and stroked Ti’s distended flesh with his own, never losing contact.

Ti reached over, enveloping both hard shafts in his gargantuan grip. “For once these overly large mitts come in useful.” He pumped them in tandem.

Like a chastised child, Ti stilled and his gaze shot to Jack’s guiltily.

“You didn’t do anything wrong,” Jack soothed. “Just hold onto us there. You stay still and let me do all the work.”

With an almost imperceptible nod, Ti did just that, holding their dicks aloft.

Jack tilted his pelvis and grazed the length of Ti’s stationary tool. In a small movement and gentle touch, he smoothed his rigid flesh repeatedly next to Ti’s with tiny silken thrusts at first. “Ahhh, Christ, Titan, that feels so good.”

He grunted in response.

Neither of them could seem to tear their focus away. Watching their cocks rubbing so intimately was mesmerizing in every possible way. It was arousing as all fuck. Ti kept firm hold, encompassing them both, but Jack used his sinewy erection to stimulate the bigger man from root to tip. Steady supple abrasion all the way. He kept up the perfect pace, driving them ever faster to an explosive peak.

Ti’s head rolled from side to side, deep moans escaped his throat, one after the other, overlapping.

Jack groaned, trying to hold back. It felt so fucking good, but he wanted to experience Ti’s pleasure more than his own. His dick burned for release; his balls fizzed. Viciously, he clamped his glutes down tight.

“Come for me, Titan,” Jack pleaded, out of breath.

“Ahhh!” Titan keened, biting his bottom lip in an attempt to stifle his outburst.

Unlike Titan though, Jack couldn’t smother his ecstasy. He cried out his gratification, loud and long.

Lost in the moment, Ti’s hand tightened, and he began to choke their cocks mindlessly to his own personal rhythm. Initially the action hurt, but was pleasing too. Titan was so very strong. As he continued to pump them in tandem, he milked Jack dry.

Finally, Ti gentled and released his hold. Jack collapsed to his side. Neither of them moved, the only sound in the room their combined heavy breathing.

Never knowing how the other man might react in any situation, he didn’t know how to handle the aftermath. He usually liked to cozy up afterward, but didn’t think Titan was the cuddling kind. But when Titan interlaced his fingers with Jack’s it was enough.
“You are a freak,” Ti whispered in a low voice, although he stroked his thumb softly over Jack’s.

“Takes one to know one,” he murmured back, smiling as his eyes closed, lethargy setting in.

Get Your Copy Today:

H K Carlton is a multi-published Canadian author of romance and its varied sub-genres, including contemporary, paranormal, historical, family saga and erotica.

I enjoy writing in many different genres. I write where the muse takes me and make no apologies for it. By now, it’s quite safe to say I will never pick just one genre and stick to it. There are just too many possibilities and stories left to tell. Today time-travel, tomorrow sweet historical romance—the next release might be, down and dirty erotica or ménage. I hope you’ll join me for the ride.

Variety is creativity’s playground—It’s where you’ll find me.