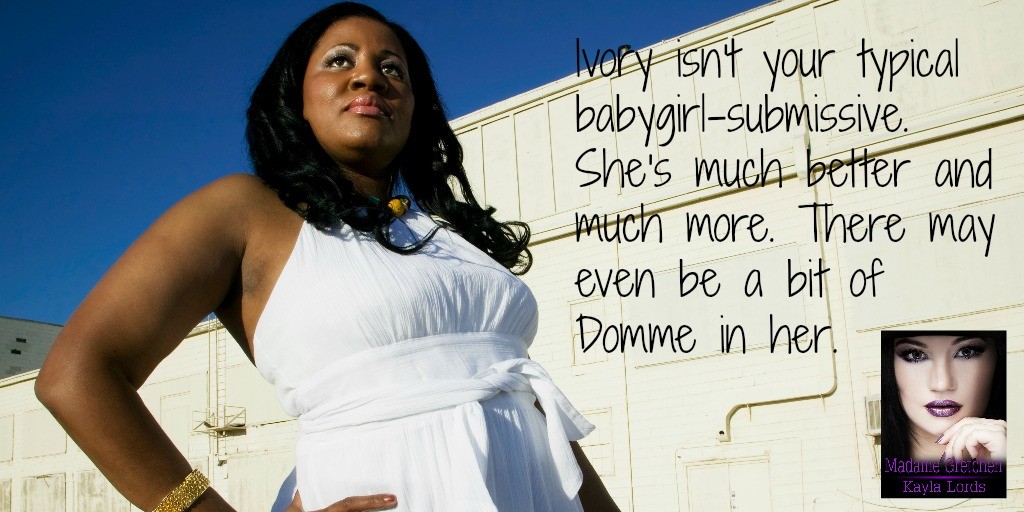 It’s been a long while since I pimped myself. Well, let’s fix that, shall we?

Madame Gretchen was released in late February and tells the stories of six newbie kinksters and Madame Gretchen, a crop-wielding sadistic Domme who takes crap from no one. My absolute favorite character to write was Ivory, an older woman, a widow, and a definite babygirl. Madame Gretchen, though, is an expert on pushing limits and making someone look deep within. There may be more to Ivory’s kink than she realized…

As she entered the classroom, Ivory looked around and smiled wide. Everywhere she looked there was rope. Blue rope. Purple rope. Miles and miles of rope.

“I see you approve, Ivory.” Ivory’s head whipped around to find Madame Gretchen wearing a rope harness over a black tee-shirt.

“Ya know, that’s probably the most normal thing I’ve seen you wear, Ma’am.” The Domme looked down at the rope on her chest. Ivory giggled. “The shirt, Ma’am. Although the rope looks sorta natural, too, though.”

“A girl has to practice on someone, right?” With a wink, Madame Gretchen turned her attention from Ivory to Randy Boy as he entered, leaving the large woman alone with her thoughts.

Ernie loved rope. He’d tied Ivory into all kinds of positions through their long marriage. Her favorite was being tied down to the bed while her Daddy Bear had his way with his Ivory Baby. Ivory shivered in delight at the memory, wishing she could have such an experience at least one more time. The slight burn on her wrists and ankles as she struggled against her restraints. The feeling of helplessness as he bent over her body, touching and biting where he wanted, when he wanted. She was a “rope bunny” – at least she thought that’s what it was called. As she’d spent more time online, she’d learned about all kinds of other things people could do with rope. Suspension was at the top of her list. Well, being photographed in the nude while suspended was at the very top of her list. Ivory smiled to herself, her face growing hot at her own audacity. Me, a grandmother of two babies, gettin’ naked in front of a photographer. No one would believe it!

“Good evening, everyone.” Madame Gretchen’s sultry voice broke through Ivory’s thoughts. “It was bound to happen. We lost someone this week – two someone’s. Our switch friends Mami and Pup – or Missy and Big Daddy, if you prefer – will not be joining us again. They’ve had a health issue come up and will take another round of sessions when they can. If they think I’ll be easier on them or I use the same techniques each time and can prepare for them, that’ll be the surprise for them.” The Domme chuckled softly to herself. Ivory could only imagine the sadistic plans she had for the couple when they came back through the course. She made a mental note to text Missy to find out what the heck happened.

“Clearly, you see all the rope laid out on the tables.” The Domme made a sweeping gesture across the room. “No one here, other than myself, is qualified to restrain anyone, but I will teach you a couple of basic ties, and everyone will have the chance to be restrained by me and tortured, I mean teased, by your fellow kinksters for a few minutes. Let’s begin.”

Madame Gretchen took them through a basic daisy chain tie to keep the rope organized. Ivory felt her mind slip away in the monotony of the motions. Loop. Pull through. Tighten. Loop. Pull through. Tighten. She could feel her body respond to the memories of days gone by – the tightening around her wrists, the feelings of nervousness followed quickly by excitement. Freedom of movement is a luxury people take for granted. Restraint feels so dangerous and dirty. Ivory closed her eyes as muscle memory took over her hands.

“I see you have a bit of experience.” Ivory’s eyes flew open at the Domme’s husky voice. “I think there’s more to you than meets the eye, Ivory.”

She looked down at her rope, unsure how to respond. There had always been Ernie in her mind and body. No one else had ever made her want them before, until this small Domme. She’s safe. I could never love her the way I love my Ernie. At the realization, Ivory felt her natural confidence and exuberance return. With a twinkle in her eye, she smiled wide.

“Ma’am, I have no doubt you and many others would be surprised at what I keep to myself.” With a wink at Madame Gretchen, she returned to her daisy chain, determined not to drift off again.

The Domme chuckled, as if she had no doubts of the surprises Ivory contained, and turned to Randy Boy as he struggled to untangle himself from the rope.

Ivory found herself paired with the slight man moments later as Madame Gretchen walked everyone through simple wrist restraints using a slip knot.

“Randy, honey, what are you doin’?” Ivory couldn’t keep the amusement from her voice. The poor man was tangled again. “Here, let me show ya.”

Ivory took the rope from his hands and wrapped it around his pale wrist. She liked the contrast between them. Her dark skin, his pale skin. His lanky frame, her round one. She was sure she’d hurt him if she rode him like a stallion, but that didn’t stop the image from popping into her head. As she slipped the length of rope through the loop she made, she watched his face. The moment she tightened the rope, his entire body tensed and then immediately relaxed as he gave himself over to the sensation of being moderately restrained. She pulled against the rope, forcing his hand and arm to move. A trickle of something crept up her spine at the control she had over him. She could lead him anywhere. And he’d probably follow.

Click this link to get your copy ===> Madame Gretchen

I consider this the most well-written of all my books. If anyone were to discover my books and wonder what they should read first, I’d beg them to read this one. No really, I love it that much.