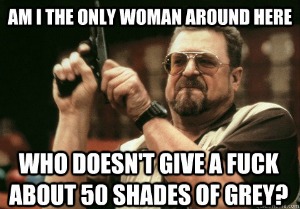 Unless asked/forced to, this is the only amount of oxygen that I’m going to give to the whole 50 Shades thing. I’m working hard at not worrying about things that don’t matter to me – this is one of them.

Some will think I’ve read the books. I haven’t.

Most will think I have some opinion which will range from it’s evil and poorly written to it’s the best thing ever. Those people would be wrong.

I Don’t Care About 50 Shades

The honest-to-God truth is that I don’t give a rip about 50 Shades. I tried to read an excerpt a few years ago, and I couldn’t get through it. Her writing style isn’t my thing. Okay, in all honesty, I found it painful and thought my eyes were going to bleed.

But there’s a good possibility someone says the same thing about my own writing.

Those who discovered our lifestyle after reading the books – did they, if they were so curious, find your book, my blog, or one of the many prolific writers on the lifestyle, too? A quick Google search would have helped them. Hell, when I search “submissive” on Google, something from A Submissive’s Guide usually pops up towards the top. Fuck, apparently I show up for certain terms. If anyone cared enough to search, hopefully they care enough to read and realize there’s more to this world than what’s contained in a few hundred pages of erotica.

Let’s put this in perspective, shall we?

My opinion, seeing it from both sides, is that anyone openly engaging in the lifestyle online has a responsibility to portray a certain reality to it. I don’t mean writers who love crafting a sexy scene can’t add an element of fantasy – most readers are smart enough not to take us literally. But I do think that when we talk about our view of the lifestyle and how it affects us that we should be as open and honest as we’re comfortable with. Most newcomers are shocked that their problems don’t magically disappear simply because they submit or dominate. They think the sex will always be perfect, that mistakes made are a reflection of them as a person, and that somehow life will become perfect. It’s up to those of us who live the lifestyle and are willing to share it to show them differently.

With that, I say, go forth and read the smut that’s interesting to you.