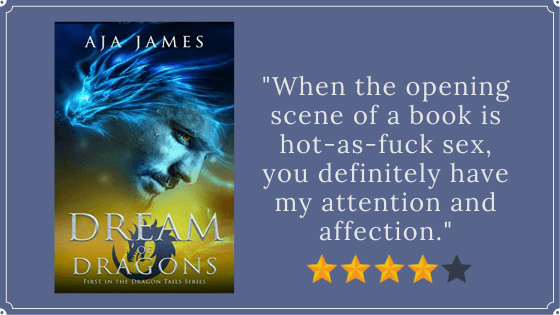 When the opening scene of a book includes steamy sex between two guys (who also happen to be a dragon and a phoenix), I’m all in and ready to love whatever happens next. Thankfully Dream of Dragons by Aja James did not disappoint. (Disclosure: I received a review copy through Netgalley.)

About Dream of Dragons 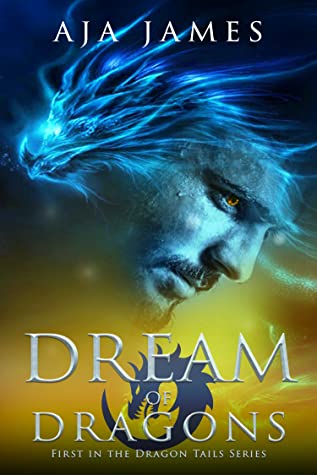 This is book one of a spin-off series by Aja James. Thankfully, you don’t have to read the other series to figure out what’s going on. Dream of Dragons makes me want to read it, too — even if just for the hot-as-fuck sex. But also because I want to know more about the “main” characters, Erebu and Sorin.

In Dream of Dragons, Erebu (a dragon) and his mate, Sorin (a phoenix) receive a Celestial Summons to go on a quest for the Jade Emperor. The “why” of this is part of the other series, but as a reader, I got the gist of it all fairly easily. Their task: get the Jewel of Dreams before the sands of time run out — with the help of a female treasure dragon and warrior, Rui. She’s no-nonsense, doesn’t get Erebu’s sense of humor, and really wishes she was being sent on this quest alone.

The story really begins when the three of them are sent down to Britain in the “Dark Ages” — during the time of King Arthur. In this universe, dragons are clearly real, as are other monsters. They meet Wolfe, a dragon-slayer who’s headed to a tournament held by Arthur and Guinevere. The treasure Erebu, Sorin, and Rui seek may be the prize offered up to the winner at the tournament.

Ultimately, they’re rivals for the same treasure, but they need to work together against the baddies, too. Can they get the treasure they seek, figure out their feelings, and triumph over evil before the sands of time run out?

My Thoughts on Dream of Dragons

Were there a few pacing issues? Yes. Some bits went very quickly, like a twist or two at the end. Some parts, like how long it took Wolfe to realize Rui was a woman, lasted a little too long. (It was almost ridiculous that he didn’t know or suspect. She rode in his arms, on his horse, for literal miles/pages. How did he not figure it out?!)

Did some of Rui’s responses during her sexual awakening feel incongruous with who she was as a warrior, and the shift between the two didn’t feel quite real.? A little. But it wasn’t enough to be off-putting at all.

Was it a shock that Erebu and Sorin could be openly affectionate and no one in 5th century England batted an eyelash? Yeah, I had questions. But also, we’re in a universe that allows for dragons, phoenixes, and a heaven with the Jade Emperor so I already suspended disbelief.

But…I really, really enjoyed this book. The author didn’t shy away from hot, hot, hot sex. Smoldering looks between all kinds of people.  A female warrior who kicked ALL of their asses and loved as fiercely as she fought. And a fun re-imagining of Arthur, Guinevere, and Camelot.

It was a fun read, and although it’s part of a series, it stands alone. No annoying cliffhangers here.

The new series actually centers around Erebu and Sorin because they have a debt to repay the Jade Emperor and will be sent on even more quests in the future. Which means guaranteed hot sex scenes in the future. And I’m definitely here for that.

Over on Goodreads, I gave it four stars. It might not be perfect, but it’s a pleasure to read.

Learn More About Dream of Dragons

Want to read the synopsis and see what other people think about this book? Check it out on Goodreads.

Learn more about Aja James, her work, and her other books at her website.

Want a copy of Dream of Dragons? You can pre-order it on Amazon!