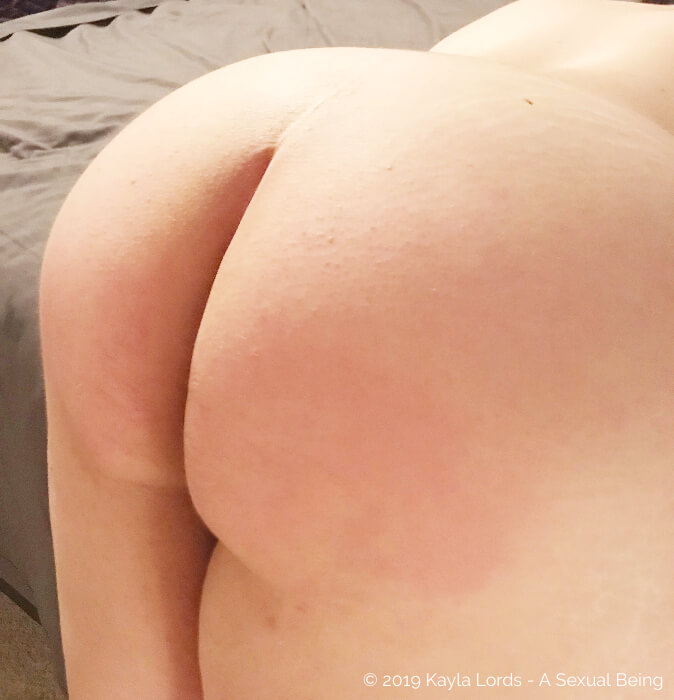 I have nothing insightful or thoughtful to say. It’s my bare, spanked ass, and I’m enamored with it. I like the roundness of it all, and the pink skin. The implication of what may happen next isn’t lost on me, either. And frankly, it’s the what-happens-next part that’s the most fun to imagine.

So there you go, it’s my bare ass.

Because it’s also officially Share Our Shit Saturday (SOSS) and we’re several days into February Photofest, let me take this opportunity to share what I’m loving from the other bloggers. I might not always get the chance to comment on everything, but I am trying to paying attention.

Drying Off by Kilted Wookie — not sure what I love more. His wet skin or all that delightful hair. Both. It’s definitely both.

Flick by Focused and Filthy — There’s not picture shared on this blog that I don’t love, but I know that pre-flick anticipation and post-flick pain well.

Little Red Coupe by Sassy Cat — I love the lingerie, the color, and everything about this image, especially the look in her eyes.

It Begins by the Other Livvy — There’s nothing to say here other than this is an absolutely lovely picture of Livvy’s boobs.

Doxy Time by Miss Scarlet Writes — One of these days maybe I’ll get to try a Doxy, until then I’ll live vicariously through this gorgeous image.

Feeling Good by Mx Nillin — I can’t fully articulate why I love this image, but I do, especially when combined with the realness of their words about being themselves feeling too good to be wrong. They’re so right about that.

The Balance of Power by Molly Moore — I mentioned in an earlier post that Molly and I were in an infinite feedback loop of inspiration because of this post, but the image speaks to me just as much as her words do.

Day 9 by Katteroo (on Twitter) — Uh, yes please. I would like to be in this position. (Ahem, calling John Brownstone!)

I am a Fantasy by Hyacinth Jones — As always, it’s not just Hy’s boobs I love (I’ve been checking those out for years) but it’s her writing, and the way she shares her feelings and experiences. And also, I’d like to smack anyone who ever makes her feel less than because they fucking suck.

This isn’t everyone who’s participating in February Photofest (click the button below to see more). And I’ll do this again this month so I can share as much love as possible with more bloggers who are taking amazing pictures and sharing them with the rest of us.