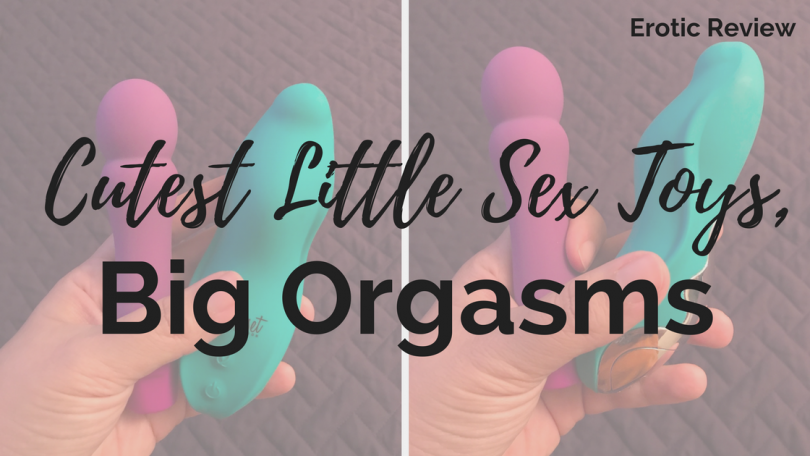 He’d been edging me for three days. Anytime he could catch me alone, his hand was down my pants, his finger against my clit. I’d almost forgotten what it felt like to be aroused, and here was John Brownstone keeping me in that state as often as possible.

Every time I whined about my “unfair” treatment at being denied orgasms, he laughed and winked, the sadistic gleam making his eyes twinkle. Why it took me three days to come up with a solution, I don’t know.

I’ve got sex toys to review (received in exchange for an honest opinion)! YAS!

I unpackaged both toys, the Nina Petite Curvy G and the Purple Cherub – the cutest little vibrators I’d ever seen – and popped batteries into both. For once, I tested them on my hand first, instead of waiting for him to do it. It had been a while since we played during sex. So. Damn. Long. And I couldn’t remember the last time I’d had orgasms for the sake of orgasms.

While he was out running errands, I propped the vibrators against his pillow. A silent invitation. Or promise…?

Later, as we both went about our day like kinky fuckery wasn’t on the schedule for later, he joked, “You act like I’m going to allow you to orgasm tonight.”

This time the whine was genuine. “Dadd-eeeeee! We have a deal with sex toy reviews. And this is definitely a review. I get to come!”

And also an excuse for (hopefully) quick, easy orgasms.

I wasn’t fooling him, and we both knew it.

It was midnight before our day finally ended. Normally, I’d beg off, claim exhaustion, and promise to try again another day. As I’d spent the day with heavy labia, the scent of desire floating around me, and the promise of those toys, I found another well of energy to draw from.

Lying in bed next to him as I play with a sex toy always feels a little awkward. In the split second before we begin, it doesn’t feel all that sensuous. Fumbling with the buttons on the Nina didn’t help much. Like every time before, once I focused on the pleasure between my thighs, any strangeness was quickly forgotten.

I held the Nina between my legs, reveling in the vibrations that covered my clitoris and labia. The gentle sensations surrounded my vulva instead of focusing like a laser on a single point. John Brownstone licked and nibbled on one nipple and then the next. We interrupted ourselves to change the settings until we found The One Perfect Setting.

My body convulsed. The gentle but insistent pulsing between my legs competed with the sharp pangs from his teeth and fingers. He nipped at one breast while he pinched the other. I clenched my teeth, terrified of screaming my pleasure. The first orgasm rocked my body back, sending me into convulsions. The second was swift on its heels.

I couldn’t breathe. I forgot to open my eyes. All that matter was the clenching deep in my cunt. More. I wanted more.

Within a few moments, I had it. My back arched as I rolled to one side. Fluids gushed from my body, soaking the bed beneath me.

“We need a towel,” I ground out through clenched teeth.

I rolled to the side and looked back. The spot wasn’t huge but it had saturated the bed. Oops.

The bed sank has he joined me. This time he held the toy against my body, jiggling it, moving it. God love him, he knows how to give me pleasure, but this one needed my touch. I gently removed it from his grasp and placed it in the perfect spot where it hugged every curve.

Waves orgasmic aftershocks rolled through my body. He chuckled as he watched my random quivers as my cunt spasmed on itself, making my entire body quake.

I nodded, much of my energy sapped. He handed me the Purple Cherub, an adorable mini wand that fit in the palm of my hand. As he rolled me into position (as I was unable to move much on my own), I pressed the little massager against my clit. We both wanted my pussy to grip his cock and milk it. Big orgasms from this vibe would help. It was not to be. No matter what angle or how hard I pressed, with 10 settings to choose from, the little wand I wanted to love was a dud. My last thought as he ground his pelvis against me, shouting dirty words as he fucked me harder was, “I’ll try that one again later.”

About the Cutest Little Sex Toys Ever 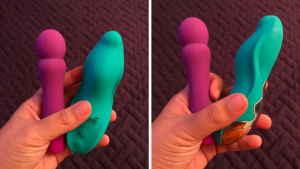 In an interesting turn of sex toy review events, I got to pick the toys I wanted to try from the website, Cherry Banana. An Australia-based sex toy website, they caught my attention with a friendly demeanor and kept it when I realized Jon Pressick (an amazing sex blogger) writes for their company blog. They suggested high-end luxury sex toys that I’d either tried or really wasn’t interested in. I felt like a diva each time I rejected an idea. When I was given the go-ahead to shop around for what interested me, I felt like a kid in a candy store. I chose the Nina Petite Curvy G and the Purple Cherub for their promise of clitoral orgasms, their adorable look, and their price.

About Cherry Banana: Navigating the Cherry Banana website was easy, and like other sex toy stores, there was a lot to choose from. I used the categories to narrow down my search. Although they’re based out of Australia, they ship worldwide. The packaging was discreet. The customs form said “games” were in my package. Sounds right to me. They wrapped everything carefully, and my toys made it all the way to Florida without any problems.

About the Nina Petite Curvy G 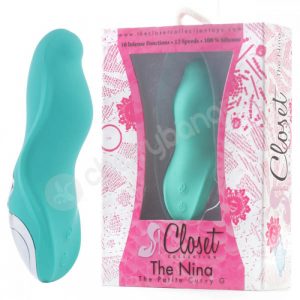 So it’s kind of a one trick pony, but that one trick is really good as I experienced plenty of pleasure and big orgasms. Interested? Check it out on Cherry Banana: Nina Petite Curvy G

About the Purple Cherub 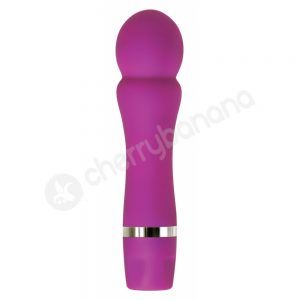 The Purple Cherub, made by Evolved, is cute as a freaking button. I knew there was a chance it wouldn’t work on me as I usually enjoy big vibrations. I also thought that because my clit is so sensitive, it might make something happen. I kept my promise to play again later, and the next night I tried vibrating only with the Purple Cherub. I thought maybe I’d overdone it the night before and had wrung myself dry. Nope. Still nothing.

The vibrations are pleasant but even on the highest setting – this one has 10 settings to choose from – it didn’t do much for me. I’m going to keep it but only because I think it’s adorable. If I was crafty, I’d make it into a keychain or something. I love how it looks so much that I told John Brownstone if I ever have an office/desk, I’m putting it on my desk so I can look at it. But using it to get off? No thanks. It’s a little high in price for it’s size, and if it had worked for me, I might say it’s worth it.

Want to see it for yourself? Check it out on Cherry Banana: Purple Cherub