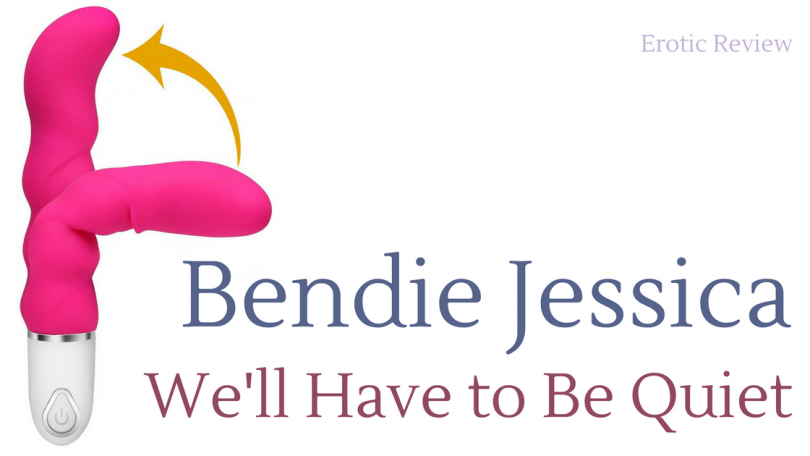 The first time I picked up the Bendie Jessica (received in exchange for an honest review), it was after John Brownstone unboxed it for me.

It took batteries which meant it was ready for me whenever I was ready. I looked in wonder at John Brownstone. When was the last time I played with a battery-operated toy? And why did it feel like freedom?

Fast forward a few weeks. The toy sat on my nightstand, patiently waiting for my attention. Every night I looked at it and thought, “Soon.”

After my week of jury duty, we came back together in our usual way a bit friskier than before. As if the days apart had been good for us. Today, I walked past him in the kitchen, rubbed his shoulder, and whispered, “I’ve got a toy to try.”

His eyebrows lifted. So did the corners of his mouth. He wouldn’t be far behind me.

I was right. Before I was naked and on the bed, he was in our bedroom.

“I’ll have to be quiet about this.” The youngest kid was up and about, but thankfully distracted by cartoons.

One look at it, and you know it’s meant to be a g-spot toy, whatever else it may do. I didn’t have high hopes for it, but I thought I’d give it a try. The vibrations were strong enough that there was a possibility of something.

But I wanted orgasms. I’d been working hard all week long, barely paying attention to my body in the right way. Let’s get to the good stuff!

I pulled it out, turned the toy so that the flat part of the top bend was against my clitoris and hit the button. Even the lowest settings sent powerful throbs of pleasure through my body. I gushed hot fluids early on, but my pussy wasn’t satisfied.

More. Give me more.

Hitting the button in the handle, I cycled through each of the ten settings, finally landing on a strong, steady pulse. My cunt spasmed, clenched around empty space, throbbing. I needed to be filled but there was no way I was moving this thing off my clit. I reached out and grabbed John Brownstone by the shoulder, squeezing as wave after wave of pleasure ripped through me. How could I feel so empty and yet so fucking satisfied? The orgasms were almost cruel. Each one only left me longing for more.

I was aware enough to remember not to scream. But I forgot an important detail.

Every muscle in my body clenched. My mouth opened in a silent scream. The room spun around me. More. I wanted more! Even as I pulled the toy away, finally unable to take another second.

I caught my breath as he remarked on how powerful it seemed. “I saw toes curl.” Yes he did. “Maybe you should try it on your g-spot now that you’re warmed up.”

Skeptical but willing, I gave it a try. My greedy little cunt sucked it deep again. I cycled through the settings, angling the toy just right. At the strongest, steadiest vibrations holding the toy in the exact right position, something magical happened.

First one small, shuddery climax. Then a second, this time stronger. A few moments later, a third explosive orgasm, sending me into silent screams once more. On my g-spot. Whoa.

As I returned back to earth, I had a thought.

“Ya want a quickie?” His eyes lit up. Of course he did. “Is the door locked?”

About Bendie Jessica by Sexy Slave

Because it operates on batteries, it is a bit noisier than other toys I’ve played with recently. Not so noisy that anyone asked what all that damn noise was so that’s good. But the vibrations also came up through the handle and into my hand. This was fine until I held it in place for a 20-minute long “quickie” (not quick at all, but definitely worth it). Afterwards, my hand buzzed and tingled but I’m not knocking the toy for that. I’m probably not meant to hold it in one spot with only a little movement for quite that long.

I didn’t try a full bend, but it was definitely pliable while I fucked my g-spot with it. I was able to tilt and bend it while holding it. Everything felt natural so I didn’t even notice how deep of a bend I ultimately needed. All I knew is that it worked. The other thing I didn’t test was it’s ability as a waterproof toy but the manufacturer says that it is.