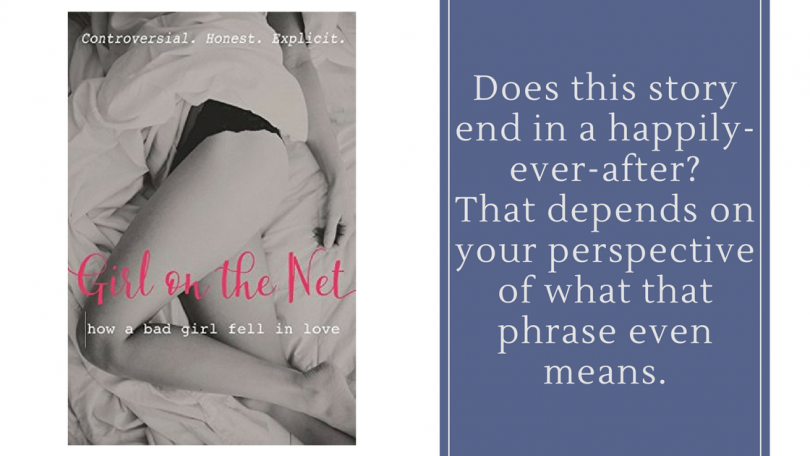 I’m not one for book reviews. Y’all have probably figured that out, if you’ve been here for a few minutes. Voracious reader. Shitty reviewer.

But when I heard about the Sexy Summer Book Club, hosted by two of my friends from Eroticon (Coffee and Kink and Written by Jenny), I was in.

Even better, the first book was How a Bad Girl Fell in Love by Girl on the Net (aka GOTN). So GOTN and I had a polite, friendly, and equally anxious meeting at Eroticon 2017. That thing you do where you’re friends with each other’s friends, both busy, and both kind of anxious/shy/introverted with new people. We know who the other is. I certainly respect her as a writer/blogger/professional. If she knows who I am outside of that one interaction, hopefully she feels the same. That’s where our personal connection ends.

Of course, though, when I heard her speak at Eroticon, I was hooked. I fangirled in my head and thought, “Oh my god, she’s my spirit animal.” Anyone who admits to speaking faster when they get anxious and asks to be reined in by the audience is someone I can relate to.

Reading her book (you know, the purpose for this blog post, remember that?) was a lot like hearing her voice in my head. Smooth British accent. Little head bobs, shrugs, and hand movements. And the way her eyes glimmer when she says or reads something especially sexy and kinky. There’s something to be said for having met someone and then reading their book.

About How a Bad Girl Fell in Love

What can I tell you about the book? Well, the title is self-explanatory. And the one secret I’ll let you in on is this: GOTN isn’t the stereotype of who we believe sexual women to be. You know, the type has all the sex she wants but secretly craves settling down and having babies. Instead, she’s terrified of it. And, from what I could tell, that fear – among a million other factors – contributes to how she interacts with her partner in her relationship.

Were their times I cringed because I couldn’t imagine doing certain things? Definitely. Was I turned on by what I’d never do but appreciated that others enjoyed? Yep. Could I tear my eyes away, though? Not at all. I had to know more. I became invested in knowing how the story (or relationship) ended.

GOTN titled each chapter from relationship articles found online. The juxtaposition of what those articles are “supposed” to answer and that her own life looked nothing like the stereotypical, common, often unhelpful answers was fascinating. It was a reminder – as I saw throughout the entire book – that there are very few right answers when it comes to sex, love, and enduring relationships.

Finding, following, or outright rejecting the “right” answers and rules seemed to plague GOTN for most of the book. She fought against those restrictions, worried about them, and wondered if her “badness” would kill her relationship. Because we only get her perspective, you could almost imagine her fears coming true. But there was one element missing in the story itself – her partner’s perspective.

That’s not a criticism. This is her story so of course we only get her perspective. But by not wondering what he thought of it all, it was easy to go down rabbit holes with GOTN.

That he stuck by her through so much of what she did “wrong” or badly is a story worth exploring by itself. My impression was that he knew exactly who he chose. While sometimes he was hurt or angered by the decisions she made, he loved her enough to give her the space to figure it out.

Does this story end in a happily-ever-after? That depends on your perspective of what that phrase even means. And if you read even part of it hoping for that kind of ending, you might be missing GOTN’s point entirely.

Overall, it was a fascinating look at one relationship from one perspective. There were twists and turns; there were times I worried what might happen next. Yes, I fell completely into this story and relationship. I worried for them, hoped for some “typical” resolution, and then, ultimately, realized nothing about anyone is typical, but especially GOTN.

And then I loved what I was reading even more.

Note: When GOTN faces her own mental health within the pages of her story, I cried. I recognized what she was going through before she did. I recognized myself within her experience. While the sex is hot, filthy, and kinky, it’s the realness of who she is as an individual and who they are as a couple that makes this story so damn good.

About Girl on the Net

This isn’t a real bio of Girl on the Net. Only a bit of gushy fangirling.

She’s a writer, a blogger, a sexual human being. She’s also anxious, hates parts of herself (she shares this in her book), and has just as many idiosyncrasies, fears, and weirdness as the next person. In short, she’s perfectly wonderful and human.

That I had the chance to learn from her and hear her perspective on the professional side of writing at Eroticon was amazing. We all have those people in our spheres that we think, “I want to be like them when I grow up.” GOTN is one of those writers for me. Her path is different from mine, so is her method, but my admiration has grown the more I’ve heard, watched, and now read.

To me, GOTN epitomizes (like Molly Moore and Marie Rebelle) what it means to be a part of the writing and sex blogging community. Her willingness to share not only her methods and techniques but her contacts and even her fears is an example for the rest of us. If I didn’t know all of that about her, I would still have loved this bruising, clear-eyed look into her relationship.

Soooo, should you read it? I think so!

Buy How a Bad Girl Fell in Love on Amazon