I like anything that gives me that “big bad wolf” feeling. It’s probably part of my submissive hard-wiring. So when author Michelle Osgood approached me about a possible shameless promotion for her book The Better to Kiss You With, the title alone gave me the good kind of goosebumps. Check it out for yourself – including the excerpt – and if you get the good kind of chills, make sure to get a copy!

The Better to Kiss You With 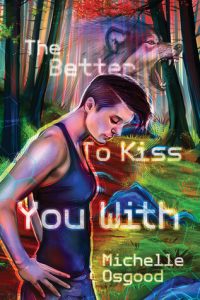 Deanna, the moderator for Wolf’s Run, an online werewolf role-playing game, wanders the local forest with her dog Arthur and daydreams about Jaime, the attractive, enigmatic woman who lives upstairs. When threats from an antagonistic player escalate, Deanna wonders if her job could be riskier than she’d ever imagined—and if her new girlfriend knows more about this community than she had realized.

Excerpt from The Better to Kiss You With

Though she knew it was silly, there was a quick spark of alarm in her chest. Arthur was a good dog. He knew to stay close to her. “Arthur?” she called, worry making her voice rise.

“I think I’ve got him,” a deeper voice replied. Deanna whirled around to look behind her before she realized the voice was coming from the next level up.

She crossed the landing and hurried up the next flight of stairs, then turned the corner to see Arthur sprawled at the top of the eighth floor landing with his tail thumping in giddy appreciation of the belly rub he was receiving.

“Oh, I’m sorry,” Deanna said to the person who was bent over her dog and sending him into paroxysms of joy. The stranger had dark hair cropped close on both sides, with a longer shock that fell over the face, and a man’s button-up fitted tightly over broad shoulders. When Deanna spoke, the stranger looked up.

At first Deanna guessed the person was a guy, a college kid whose jaw was still stubbornly smooth, but as the figure straightened Deanna caught the soft hint of breasts under the shirt. Suddenly she could see the thick frame of lashes around a pair of amber eyes, and the feminine curve to lips tugged into a wide and rueful grin. Deanna hastily tacked several years onto the stranger’s age: not a kid at all, but someone closer to her own twenty-six. Deanna swallowed, her throat uncomfortably dry, and desperately wished she was wearing something other than a faded pair of pajama pants and the ugliest sweater she owned.

“It’s okay.” The stranger continued to pet Arthur, who’d closed his eyes in bliss. She gave a self-conscious sort of shrug. “Dogs like me.”

Michelle Osgood lives in Vancouver, BC, with her partner Elizabeth and their two cats. She has a Bachelor of Arts degree in English and has been reading, writing and blogging in online communities for five years. She likes to read romance novels, speculative fiction and feminist pop culture critique.