This post is sponsored by African Fly. I received a bottle of the product in exchange for an honest review. All opinions – and the resulting kinky fuckery – are all my own.

Let’s start with the good stuff, shall we?

Turned on I was. My breasts felt heavy. My nipples were tight. A full feeling settled into my pussy.

On a normal Monday, I read the posts, squirm in my seat, and then go about my day. Today, the feelings of desire never dissipated.

Later that night, kneeling on the bed, I hissed when my nipples grazed the cool sheets. The scent of sex and desire wafted around my bent form. I arched my back, exposing already wet and swollen lips to the flow of air from the ceiling fan above. I trembled.

“Is my babygirl still thinking about those posts you read earlier?” I mumbled something into the sheets as I leaned into his hand, his hot palm soothing my skin, causing goose bumps to form. He cupped my ass, squeezing and spreading my flesh wide, opening me further. “I know what you need.”

I’d seen a pink mini-vibrator on the nightstand and knew he had plans for the night. Still, I didn’t expect the buzzing against swollen lips and clit. It wasn’t enough to get me off, not by a long-shot, but it stoked the fire that had been on a low burn for several hours.

Just as I began to writhe and moan, the orgasm slowly, slooooooooooowly building, he stopped. Ack! No, don’t stop! Then, the tell-tale squirt of lube. What the…?

What is African Fly? 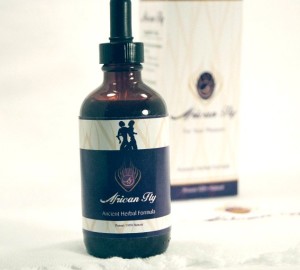 Is African Fly (http://africanfly.com/) a miracle drug that made my ass open wide up so a small vibe could slip in without me knowing? No, I don’t think so. But did it stoke the fire of desire when I had it and keep it on a low burn? I think so. So what is this stuff?

From the website: “It’s a liquid aphrodisiac made from eight herbs designed to make sex feel better for men and women.” Well, okay, then. According to the brochure that came with the bottle, it increases every aspect of having sex. From fantasies to arousal and throughout the entire sexual act. Basically, it’s designed to improve your total sexual experience.

It’s meant to help both men and women increase their sexual desire. For women, it may also increase lubrication – not something I experienced, but I haven’t taken it on a daily basis, either. For men, it may help with erectile dysfunction issues, if you have them. John Brownstone hasn’t been my male guinea pig yet to tell me what the effects are for him. (I’m working on that, lol.)

What are the Ingredients and When Do You Take African Fly?

Apparently the original version of African Fly has been around for a while. In this current version, there are eight natural ingredients (feel free to go to the website to check out a full description of each – http://africanfly.com/african-fly/ingredients/):

One full dose is three droppers (which equals one teaspoon). The recommended dosage is three droppers, three times a day. Start with low doses (two droppers instead of three) during the first few days to test your tolerance. Then increase to the three droppers. The brochure and the owner recommended mixing it with juice or tea when you take it because the flavor is so strong. That’s exactly what I did, and I could tell a difference in the flavor of my juice. I have no clue what it tastes like by itself, and I’m not sure I’m brave enough to find out.

Will I Continue to Use African Fly?

If you’re curious, definitely check it out. I don’t believe in miracle cures or drugs, and I wouldn’t say this is one but from the view point of someone with a healthy sexual response and no known problems, I definitely felt something different after two doses.