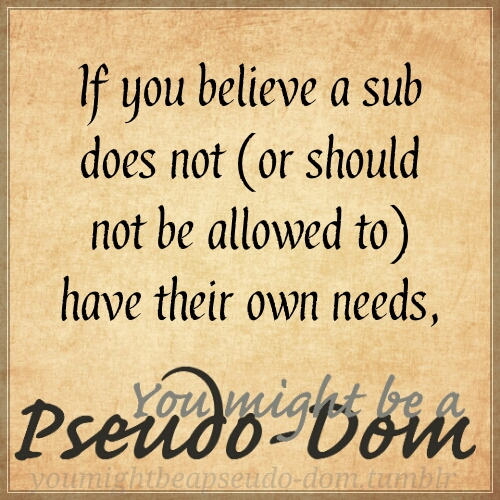 Are you kidding me? Silly me, I wrote a post about how to communicate with a Dominant based on my own perspective, from my own highly successful and satisfying D/s relationship. I even closed that post with, “I know other people do this differently, feel free to share your perspective in the comments below.” And what do you do? You attempt to say I’m not a real submissive. You accuse me of encouraging submissives to “verbally attack” their Dominants. You seem to maintain the position that The Dom™ knows all, sees all, and should have ALL the say in a D/s relationship.

Later, when I (silly me) calmly tell you that you have your right to your way, and we have our right to ours; when I tell you I’m sharing a method that has worked in a successful, almost-three-year relationship; when I say that everyone is entitled, in ANY type of relationship, to communicate with their partner – after I say all of that, you tell me I’m uneducated, don’t understand the psychology of D/s, and have no business giving advice because I know nothing about the lifestyle?

Look, Mr. Domly-Dom-Who-Knows-All-the-Dom-Stuff – you can kiss my submissive ass.

And if that post was on my own website, that’s probably what I would have said. But it wasn’t my space, and I respect the person who allows me a place to share my views on D/s and what it means (to me) to be a submissive.

Let’s go through those “points,” shall we?

The Dom™ is not an omniscient being who always knows what his/her submissive always wants without input from them. If you aren’t willing to listen to your submissive, you’re not a Dom. You’re an asshole with a self-appointed title.

How you communicate with each other is different than how John Brownstone and I communicate. And that’s okay. Maybe it’s a set day or time of day to hash things out. Maybe it’s a code word (like a safe word) to say, “Stop. I have something to say.” Maybe it’s simply a Dominant asking questions of a submissive. I know several Dominants who have their submissive keep journals for them – a place where they can pour out their hearts. And I have no doubt, it could be any number of methods I’ve never considered. The point is not how you communicate – it’s that you do communicate.

If anyone thinks that neither Dominant nor submissive will change, grow, have different needs over time, they’re naive in a very scary way. People need to be able to express themselves. They need to be able to share their thoughts and feelings. And relationships have to allow room for growth and change. If they don’t, they stagnate and (eventually) die.

I don’t need an anonymous know-it-all Domly Dom™ on the interwebs to sanctify and bless the knowledge I have accumulated over the past few years. Don’t need it, and I sure as hell didn’t ask for it.

You know what’s weird? I spend a lot of time hesitating over what to write or what to record for the podcast. It’s very difficult to talk about BDSM and D/s when every single relationship is different. If not for the encouragement from people I trust who know more than I do, if not for the feedback I get from submissives who say I’ve helped them, and if not for the confidence I’ve gained in my own D/s relationship, I wouldn’t even write and share as much as I do. Even then, I try to always make it clear that my way isn’t the only way, that you have a lot of freedom in how you arrange your own D/s relationship.

A New (to me) Way: Dynamic Mediator

John Brownstone and I went to our local munch a few days ago, and we were treated to a lively discussion on consent by a couple who’ve been together for 5 years. They’re in a consensual non-consent relationship. Based on their agreement and contract, simply by staying with him, she gives consent for whatever he does.

If that sounds scary to you, don’t be worried. His sadism and her masochism complement each other. She enjoys it, and she stays, and that’s what matters. They were also a very loving couple who looked for reasons to touch one another during the presentation. They were, dare I say it, cute.

What I found most enlightening was the way they handle communication – when something isn’t quite right, when one of them wants a change. He’s the Master, she’s the slave – even though I’m not sure they use that terminology. In terms of common labels, Master/slave is the closest I can find. So their dynamic is not the D/s I’m used to where I have the freedom to speak at will, even though the decision won’t ultimately be mine.

Anyway, they use someone called a dynamic mediator. It’s a person who they both trust that understands their specific lifestyle. When one of them needs to discuss something difficult, outside the confines of their dynamic, this is the person they go to. A mediator.

I’d often wondered how people in those types of dynamics worked out communication. I know that every couple, Master and slave, Dominant and submissive, Daddy and babygirl, has their own way. The mediator idea was definitely new to me and it made sense.

There’s no question as to the seriousness of the issue. There’s no question about whether the issue, the conversation, or even the need is within their protocol. This unbiased third-party (who knows them both very well and understands their lifestyle) helps them come together for those discussions.

I have more to share from their presentation. Apparently, it’s National Consent Month (I really need to put these things on the calendar!). And his discussion on consent was nuanced and something to think about. We (including myself) throw out the term a lot, but it’s more than simply saying “yes.” Give me time, and let’s see if my blood pressure can come down a bit, lol, and I’ll write about that part of his discussion, too.

And if you’re curious, here’s the post that started the rant and rave.

P.S. My original rant at the top was much more scathing, filled with f-bombs and lots of name-calling. John Brownstone told me to take that part out – which is why I never hit publish when I’m really angry. And why I look to my Daddy for support and guidance.