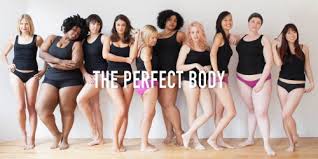 There was a time, in the not-so-distant pass, when the thought of getting completely naked for someone was horrifying. Just awful. Being asked to undress, even as a submissive with her Dominant, reduced me to ugly-crying tears. (Not the beauty of glistening tear drops falling down my cheeks.)

A lot has changed over the past few years.

John Brownstone set me on a path to self-love (Ha! Not that kind of self-love). While we were separated by too many miles, I used daily mantras to remind myself I was beautiful and worthy of love. Once together, I would have had to be a blind fool not to see the love and appreciation in his eyes whenever my clothes came off.

As important as his love and appreciation have been – and it absolutely has been – seeing other “normal” people naked helped the most. It started the first time I went to a dungeon. Yes, the first scene was of an absolutely gorgeous woman suspended from rope. If she’d been the only person who’d been naked that night, the story might have ended differently.

The next few people were large, lumpy, and nothing like the svelte, air-brushed people you see in magazines…or Tumblr. They had real bodies. Cellulite, small breasts, thick waists, rounded tummies, you name it. They were normal. And in their desire to be bound by rope or paddled, they bared a lot of their body for the audience, seemingly uncaring about who saw.

Seeing them gave me the courage to take it all off.

Over time, I’ve become fascinated by the nude body. I’m always looking for someone who shares characteristics with my body. Nipples a certain color. Waistline a certain shape. Thighs with the same amount of jiggle and cellulite. They don’t even have to be naked. Going to the beach is people-watching heaven for me as I check out women out in their bathing suits.

Whenever I hear someone bemoan their body, I’m sad for them. Typically, they’re comparing themselves either to a 20 year old version of themselves or to what they see in magazines. Neither is realistic. I want to tell them to open their eyes to all the bodies around them, to see how different we all are, to get comfortable looking at the not-so-perfect bodies. Only then can they see the beauty in their own body.

In fairness, I’m not attracted to or turned on by all the bodies I see. Some just don’t do it for me, male or female. But I am appreciative of most, fascinated by all, and comforted by the feeling of “normal” whenever I see someone who’s body is similar to mine.

For every thin person you compare yourself to, I assure you, there’s someone comparing themselves to you and wishing they had your body. Do you see how this could be the most self-defeating thing we do? Instead, let’s recognize that we’re all different, but that the things we hate most about our bodies truly are normal and then, let’s just get naked. 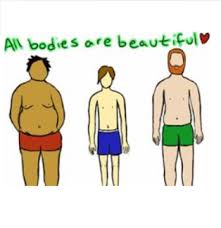 N is for nudity. I still have days when I don’t love what I see in the mirror, but rarely is that because I want someone elses body. Usually, I just want the body I had a few years ago – which still wasn’t model-sized. I also think we can accept the body we have and still want to become healthier, stronger, and yes, even thinner.