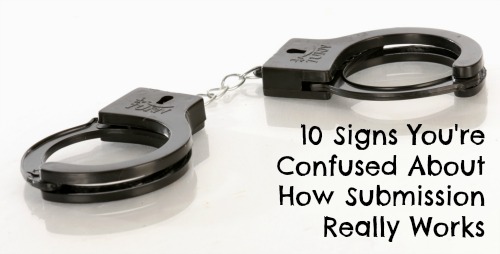 It’s easy to believe that the only people who are completely confused about how Dominance and submission (D/s) and BDSM work are the wannabe Dominants. It would be unfair of me to say that the only problem lies with those who want to be in charge. There are plenty of submissives out there who get it wrong, too. After my own recent experience with this and a few conversations with others who have gone through the same thing, I thought it might be time for a little tough love for people claiming to be submissive looking for a long-term relationship and seem to be getting it all wrong.

To be fair, I’m not referring to submissives who meet the wrong person or believe the lies. That happens with any type of relationship, vanilla or kinky – and it can happen to Dominants, too. No, today, let’s discuss how other types of submissives are getting it wrong.

To be fair, some people like to play anonymously online as a “submissive” or “Dominant.” For them it’s pure fantasy. This post isn’t for those people. This list is to give a little tough love for anyone, man or woman, calling themselves a submissive, claiming to be looking for their forever Dominant, and who don’t seem to understand that submission requires work and time. If you’re not willing to put in the effort and just want some kinky play, own it, and be a bottom. But don’t get people’s hearts involved and then cause hurt and pain to people who don’t deserve it.

Welcome to Wicked Wednesday! This week’s prompt was to write a “How to” post. Well, I went with a “how-not-to” post instead because this is something that’s been on my mind for a while. It’s not always about poser Dominants, ya know. Some “submissives” are just as clueless. Okay, with that, go forth and read other fun stuff shared for this week’s Wicked Wednesday!