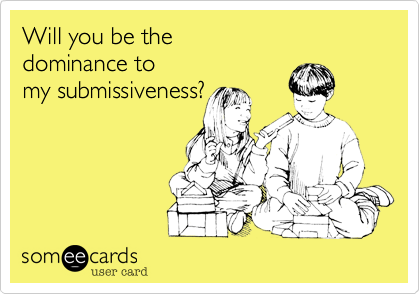 Yeah, I know. With all the crazy, fake Doms out there or the people who seem too good to be true and then ghost out on you, it’s easy to get discouraged. Hopefully, you’ve done a self-check to make sure you’re not scaring them off. Now, maybe it’s time to think about how you approach a Dominant to make sure you’re picking a good one or finding one that’s worth the work and effort that go into having a successful D/s relationship.

I can’t give you a step-by-step checklist of what to say, what to wear, and what to do to find yourself the greatest Dominant who ever lived, EVER. We’re all unique individuals, and everyone is looking for something different. I’m not going to tell you to dress a certain way, speak a certain way, or do anything very specific.

Unless you’re looking for a play partner – which has its own set of best practices – you need to approach the search for a new Dominant like you would any relationship, vanilla or kinky. You’re people first, kinksters second (and for some people, kink is third, fourth, or even tenth of the list).

But, if you think all you do is find the fakes and posers or that every D/s relationship you have is doomed to fail, there are a few things you can try that may help you find a good, decent Dominant partner.

Get to know each other in a vanilla way first.

Shocking, right? For some people, proclaiming their kinky proclivities from the first moment is a must. For others, it’s not something they admit until much later. All of that is perfectly fine. Regardless of whether this potential Dominant knows you’re a kinky submissive looking for freaky things to be done to you, get to know them like you would anyone else.

Unless you’re the type to ask about a person’s sexual hard limits in every situation, you probably shouldn’t lead with that one even if they are Dominant. Find out who they are as a person first. D/s – for many of us – is a long-term relationship and power exchange. Who cares how kinky they are if you don’t like them as a human being first?

More than just the questions you ask to learn about someone, when you’re ready to discuss kink and D/s, ask a million and one questions. The good Dominants of the world aren’t scared off. Hell, they welcome it because it shows that you’re willing to communicate, that you’re curious, and that you want to learn as much as possible about them.

Dominants are not all-powerful beings in your life until you make them so (and until they agree to be that for you). You should know their limits, their fetishes, their likes, dislikes, and fears just as much as they should know yours. No, you’re not being too forward by asking questions. And never believe you’re supposed to sit quietly and let this Dominant make all the decisions. The good Dominants don’t want to do that – at least not until you’re in a negotiated and established relationship.

Don’t be afraid to say no.

Now, let me add a caveat. If this is someone you want to become your Dominant, I suggest being respectful when you tell them no (unless they were a total asshole, of course). Until you know they enjoy taming a submissive or dealing with a brat – and not all Dominants do – being polite is always a good idea. You can still be firm and get your point across while staying polite.

Expect to be treated with respect.

This goes along with that thing that some fakes do of demanding that you call them Master and bow to their wishes – and they usually do it all through a direct message on social media. It’s a little scary how often it happens, and how quickly they’ll turn into freaks the moment you say no. They’ll also treat you like crap if you say yes, by the way.

You have every right to demand respect. In the online world, it’s easier. You can block and delete people left and right. When you’re meeting someone face to face, it’s not always easy. Show that you have a backbone and that you won’t be pushed around or bullied. The good Dominants might be testing you and will respect you for it. The fakes and posers will call you mean names and slink back into their slimy caves. Every decent Dominant I’ve ever met treats all people with respect from the very beginning, until they’re given a reason not to.

Push back when you’re uncomfortable.

So maybe you’re far enough along that you’re truly negotiating a potential relationship. Hell, maybe you’re even looking over a list of potential kinks and fetishes to figure out where your limits are and how you’re both compatible. When something doesn’t feel right, it’s okay (and really, it’s a requirement) that you say something.

Just because this person really likes the idea of knife play, and the idea makes you want to puke, doesn’t mean you have to acquiesce. Very rarely are two people going to like all of the same things. If the chemistry is good between you, you might not even have to agree on much at all when it comes to kinks and fetishes. But when your boundaries are being pushed past your comfort level and you’re not in a relationship yet, you have a responsibility to say something. When you’re in a relationship, you still have every right to say something too, for what it’s worth.

Don’t expect a Dominant to read your mind.

This goes along with that last one. Yes, many Dominants are very observant and can actually appear to be able to read your mind. They listen and watch and then react to your spoken and unspoken cues. It’s uncanny…I know. But they are not and have never been mind readers. Don’t treat them like they are.

Listen to your instincts.

We all get vibes or gut reactions to stuff, especially people. Often times, we reject that little niggling voice that tells us something isn’t right. Or, when it seems too good to be true, we try to ignore the vibe that says this might really be a good thing. Don’t ignore that feeling – good or bad.

Whether you’ve just met someone or you’re in the early stages of your D/s relationship, when something doesn’t feel right, pay attention. If you have to ask yourself (or others – as my email inbox can attest) if something is right or normal or okay, you probably already know the answer. D/s is a relationship, first and foremost. If you don’t like how you’re being treated or how the other person speaks to you or looks at you, that’s not the sign of a good healthy relationship. I always recommend communication first – in case it’s a problem of mixed signals and expectations – but after that, always go with your gut.

Look, I wish I could give you a checklist of what to say and do, or not say and do, to help you find the perfect-for-you Dominant. The reality is that this is a relationship between two people, first and foremost, and needs to be treated like it. Yes, eventually, you’ll talk about things you couldn’t imagine discussing in previous relationships (and not all of it will be sexual) and yes, this can be the most fulfilling relationship of your life – with the right person. But don’t let your desire to submit cloud your judgement. Find the best match for you as a person and then decide if they’re the right Dominant for your submissive self. 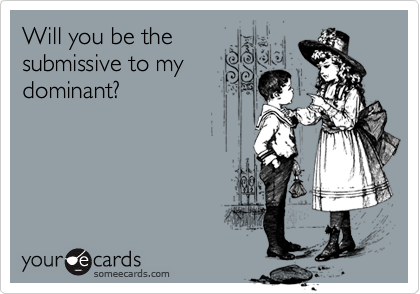