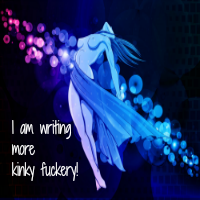 I’ve been feverishly working on my next book – after a several week snag of nearly zero writing. I’m hoping by the time you read this, I’ll have sent copies to my beta readers. (Crossing my fingers!) In the meantime, I thought I’d share another snippet. First, you met Madame Gretchen, then Missy Girl who is also called Mami when she’s in Domme-mode. Now, it’s time to meet Randy Boy – a male submissive and a pain slut who tends to have the hots for every woman he sees. (Be kind, y’all, this is completely unedited). Enjoy!

“God, you’re such a fucking loser. Why the hell did I ever marry you in the first place? Just sign the God damned papers and get them back to me!”

The snarling voice of his almost ex wife reminded Randy why he hadn’t fought the divorce. He’d told himself for years that commitments were for life, that he wouldn’t go back on his marriage vows. But when she’d finally screamed her demand for a divorce in the shopping mall parking lot, he’d been more relieved than embarrassed.

He deleted the voicemail from his phone, glancing over at the paperwork from her attorney. He’d already read it over. He kept his car, his stuff, and his debt. She got the rest. That was fine with him. He was just happy he could breathe again.

Looking down at his phone, he grinned. The reminder about tonight’s class at the club. If that didn’t brighten his day, nothing would. The last class had been amazing. He hadn’t come that hard in years, maybe ever. Sweet Bella had been so shy about it until she saw his reaction to her. She’d exuded power during their session. He’d felt his mind go quiet for the first time in a long time once he gave himself up to whatever was going to happen. But God, he went hard as a fucking rock whenever he thought about bringing her to the edge over and over again.

He’d never known such power in his whole life. Jesus Christ, watching her face – the way her tongue darted out to moisten those full lips, the way her teeth dug into that full bottom lip. She was afraid to make a sound which made him want to push her even harder. He had, too. He’d pushed her until she’d squirted down her legs onto the plastic beneath her feet. What a fucking rush!

He took a good long look at himself in the mirror when he came home that night and every night since the class. Could he be a Dominant? Pale skin, skinny bird chest – or so his ex always said – a slight paunch in the middle. Definitely no six-pack abs there. Graying, thinning hair. He’d always kept it long, partly because he loved it, partly because it made her crazy. Should he cut it short? Wear three-piece suits? Or was it leather? All the Dominants he’d read about online seemed to prefer suits or leather. Could an aging hippy really be a Dom? Nah, probably not. He’d settle for being kinky as hell.

I wonder what Madame Gretchen has in store for us tonight. I wouldn’t mind letting her work me over. Fuck, she’s hot.

Randy had been fantasizing about the Domme since the first class. Part of him wanted her to take the ever present riding crop to his ass. Part of him wanted to strip off all the latex and find out what it would take to make her skin glow pink. Ha! I don’t know if I’m sub or Dom. Maybe I’m just fucked up and confused.

The other students slowly arrived. He loved watching people, always had. The ex said it made him seem creepy, but she’d proven over the years to be a class A bitch, so he wasn’t going to let her words bother him now. As long as he didn’t leer, it shouldn’t matter.

Ahhhh, sweet Bella. Lush curves, sweet voice, and a mouth just begging to be kissed. He smiled to himself. And to be fucked.

He refused to question where the thoughts were coming from. He considered himself submissive. He liked strong women. He liked partners who roughed him up a bit.

Mami – or is it Missy Girl, tonight? Big Daddy…or Pup? Fuck, I can’t keep their personalities straight. Randy scowled to himself, annoyed that the pair couldn’t seem to decide who they were from moment to moment. I don’t get switches. Just fucking pick.

Mmmm, there’s Ivory. I hope I get partnered with her soon. He’d only recently admitted to himself a love for African American women. He wasn’t brave enough to approach anyone, let alone someone from a different race. The fear of saying the wrong thing or some how coming across as racist left him paralyzed. But he was drawn to Ivory’s chocolate-colored skin and her coffee-colored eyes. She was a large woman who was clearly proud of her curves. I’d love to sink my fingers into her. I bet she’s soft as hell. He looked away as she scanned the room, afraid of making eye contact with the friendly woman. She’s submissive, though. What the hell would we do together? Wait for someone to tell us what to do to each other?

Randy looked away as Drake sauntered into the room, unable to look at the picture of male perfection. God damned Greek god or something. He couldn’t help but compare himself to Drake’s physical perfection. It left him feeling hollow inside, a feeling he knew well after sixteen years in a miserable marriage.

Where the hell is Madame Gretchen? He watched the door, desperate to see what the diminuitive Domme would wear tonight. The door swung open, causing everyone to jump. God, she’s a fine woman. Randy’s gaze never left the petite woman as she walked through the door and to the front of the class. Black corset, leather shorts, and boots that laced up her thighs – and, of course, the riding crop firmly in hand. He felt his body react to the sight of her body. His cock twitched as he inhaled her scent when she walked by.

“Good evening, class!” Madame Gretchen’s tone was softer than usual, almost seductive as she surveyed her students. “I see everyone returned again this week. If I didn’t know better, I’d say I’m teaching a bunch of masochists.” She laughed at her own joke.

“Tonight, we’re going to mix it up a bit – as we’re approaching some hard limits.” The Domme was all business now. “A few of you think you might be into pain. A few of you have made impact play a hard limit. Some of you are exhibitionists, others voyeurs. Thankfully, no one made either of those a hard limit. So tonight, a bit of group work. No partnering. My pain sluts will get their wish, as will the exhibitionists and voyeurs. And those of you who say you’re not into impact play, maybe you’ll see something that makes you rethink your stance.” Randy could have sworn her eyes flickered to Drake. How could he not like impact play? Maybe he doesn’t even know what it is. Randy had to suppress laughter at the idea that the example of male perfection wouldn’t know something like that.

“Randy Boy, you’re up first. An exhibitionist who thinks he might be a pain slut. Stand up here with me and strip for everyone.”

Randy’s eyes shot up to meet Madame Gretchen. Had she known he wasn’t paying attention? How did she always manage to seem so abrupt? There was never an easing into anything with her. Get naked and do my bidding. He felt his body react to the thought.

Swallowing hard, he stood and joined the Domme at the front of the room. He tried not to think about Greek gods, female flesh, or fuckable mouths. He willed his cock to calm down, to no avail. He might be nervous, but he’d always had the urge to be watched by others, an exhibitionist Madame Gretchen called him. Well, okay, maybe he was, but that didn’t mean he wanted his cock at full attention. What if they thought he was a pervert walking around with a hard dick? Dude, you’re in a kink class taught by a woman covered in leather. You’re definitely a pervert. Get your clothes off before she makes you look like a fool in front of everyone.

And, did she let him have an orgasm later? Guess you’re gonna have to find out when I release the book. Remember, I’m giving this one away to everyone who’s subscribed to my blog so if you like the sound of it so far and you haven’t subscribed – what are you waiting for?