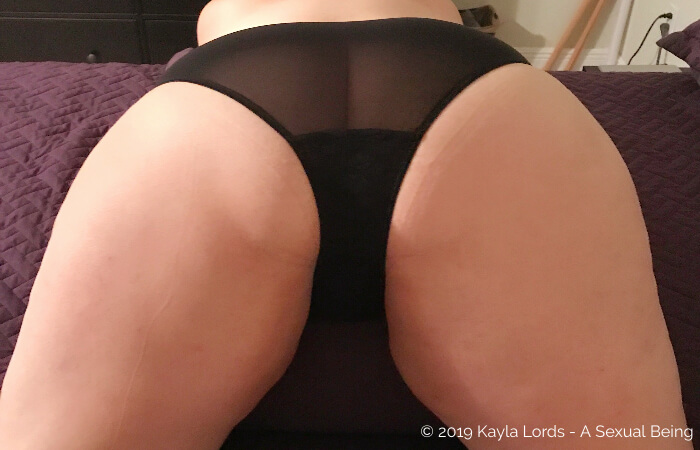 “I’ve got plans for today, babygirl.”

I knew he did. We’d recently received the Hipster, a wedge, from Liberator. From the moment we opened it up, he’d had plans.

A big part of me likes not having to plan the kinky fuckery, but that doesn’t mean I don’t get a little curious…or even worry.

When he laid down on the bed, the top end of the wedge under the hips, I blushed. Oh, we’re doing this, are we?

He patted the bed. “Come on up girl.”

It’s been a while since I’d climbed on top of John Brownstone — too long in some ways. And never with his hips lifted into the air, right there in my face.

As always, when I position my cunt over his mouth, I think back to the time I nearly waterboarded him. It’s a funny memory, in retrospect, but it never fails to make me cautious. Suffocating your partner with both your vulva and copious fluids isn’t a reason you want to call 911.

But, as with all cock-sucking-pussy-licking, we forgot everything but the pleasure within moments. Yes, I had to relax my pelvis and allow his tongue to reach my clit. And he had to remember not to let go when I did that special trick with my tongue and mouth.

(Mostly, treating his glans like a Tootsie Pop that I’m desperate to suck down to the center. If you’ve ever seen the cartoons where the masculine character beats his foot on the ground as his tongue flaps to the ground and his eyes roll back in his head, you’ll know what John Brownstone looks like when I work my magic on his cock.)

But, as with all things, even with the wedge to help, my thighs weren’t up to the stretch and kneeling. And neither of us wanted him to orgasm in this position. There were still too many ways to enjoy the mid-morning interlude.

“Let’s switch things up! Get off me, babygirl.”

I expected him to get off the bed. Instead, he re-positioned himself so that he lay against the top of the wedge.

Oh! I’m riding now. Uhhhhh, okay. Play it cool. You can do this. It’s sexy. He really enjoys this. Just slither over his body and seduce him with nipples and skin-to-skin contact.

*Narrator’s voice* Reader, she did not slither seductively.

I threw a leg over his hips, reminiscent of the way I used to (attempt to) throw my leg over his motorcycle. Which is to say I nearly kicked him and almost whacked my foot against the bed railing.

He loves having me on top of him, sliding my wet cunt over him, grinding my hips into his. I….feel awkward, notice every twinge in my knees and thighs, ask if I’m doing it right.

He grabbed my hips, holding them stationary as he pistoned up and down. This is why he’s in charge.

Until I just couldn’t. “My knees!”

Another position move, the third one, if you’re counting. Now it was my turn to be on bottom (my preferred location). Doggy style…with a Liberator wedge.

And, like a kinky Goldilocks, I’d finally found the position that was juuuust right. I draped my body down the Hipster, relaxing my upper body into the reclined angle, reveling in not needing to put any weight on my arms. He knelt behind me, finger tips pressed into my flesh. No lube needed today — he slid right in.

I forgot that the wedge was meant to hold my weight and maintain my position. Years of holding my back and ass at a specific angle don’t drop away in the first 30 seconds, but eventually I figured it out. I was afforded the luxury of relaxing and allowing the top end of the wedge to hold my weight.

He picked up speed. For once, no queefing and my cheek didn’t rub against the bed (although sometimes that’s hot on a very primal, submissive level). And the biggest shock of all…he fucked me until he came with a loud groan. No need to switch to our side to spoon. No taking a break for his knees.

It wasn’t the most raucous, kinkiest, roughest sex we’ve had. But it was a re-discovery of an old favorite…done in a new way…and with a satisfying outcome. It took three position changes to find it, but as they say, the third time is the charm.