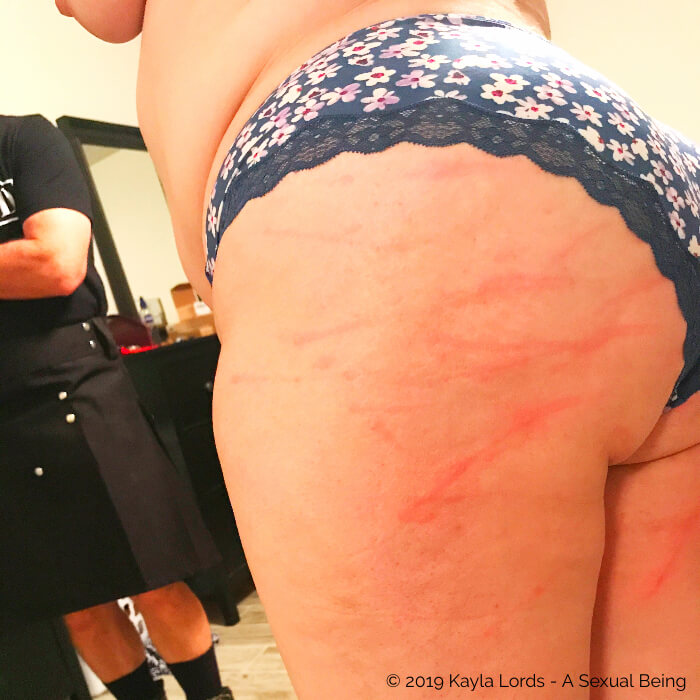 John Brownstone and I do not play to the edge of my limits or until I safeword. For me to decide to call a scene means that I’ve hit the end of my tolerance. And while we have played to that point before, it’s never on purpose. Blame my anxious mind or whatever, but if I get to the edge, that’s where I assume play will start next time. That’s what I carry with me into the next scene, and I don’t enjoy that feeling.

So no, we don’t purposely get kinky like that…but sometimes we dance on the edge of those inner boundary lines.

He’d been practicing with his single tail whip for days, after a lovely and wonderful lesson from a fellow kinkster — in our living room because of course.

The crack was enough to make me jump and clench at the same time. He’d already put a hole in a canvas bag he was using for practice. I understood this would be a stinging pain…and an imperfect scene because he’s still learning.

And I agreed anyway.

Because not every kinky scene has to be a moment to lose myself in sensation and power. Sometimes it’s the give and take of, “A little to the left” and “Okay, stick your ass out a bit, babygirl.”

All of his strikes didn’t land, for which I am eternally grateful. I would have reached the end of my tolerance much sooner.

When the tail did make contact, I shrieked and jumped, in his favorite kind of sadistic “dance.” But then I had to breathe. Inhale to clear my mind, exhale to push the pain away.

Again. Go again, while I can still handle it.

Until I could feel the invisible wall of my limits looming. I knew my brain would remember the last sharp crack and whatever excruciating pain came with it. And I would recoil the next time he suggested it. Better to end on a high note. Glory in the marks. Revel in the experience. Move to the next thing.

It was a night of experimentation.

Wax play has been on our list for literal years. Now was the time to try. We’d already experimented with our set of cheap wax play candles. (I’m convinced they likely burn hotter than candles of better quality but I don’t know that for a fact yet). To make it tolerable for me, he had to let the wax drip from a very high point.

Making beautiful, multi-colored splatter marks…and increasing the area where I felt the heat. 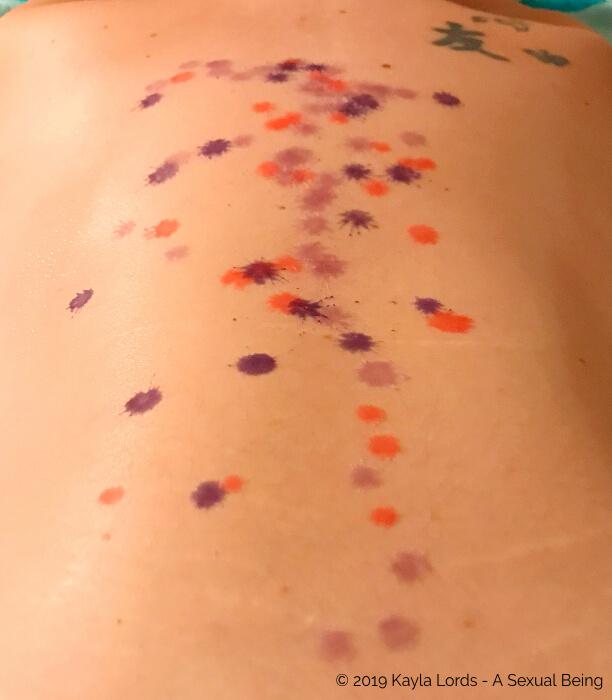 Heat that made me hiss and writhe. Heat I had to breathe through.

We developed a new signal. My hand extended, pushing against some invisible barrier, every tendon tight with the will to breathe through each bit of pain. Head down, inhale through my nostrils, exhale from my mouth.

I understood I was new and had no tolerance for the sensation. My experience tells me that with better equipment and time, I can adjust.

But every few drops, I needed to stop, catch my breath, take a moment to revel in the warmth that seeped into my skin after each initial shock. The only pleasurable part of this wax play experience.

I felt the outer edge of my limit for this kind of pain creep up in the darkness of my mind. A few more drops of wax and I’d tell him to leave it alone for good. That wasn’t how I wanted this to end.

He knows me well, and the time between breaths had extended again. The part of me that wanted him to have his fun warred with my sense of self-preservation. My pragmatic nature won.

I thought my mind was still sharp, in the moment, ready to go. Until I climbed on the bed and realized I swayed drunkenly. A different kind of subspace but very real.

The sensations, the newness, the pure submission to unwelcome pain offered through his very welcome dominance. My mind was mush but I was lucid enough to know what I wanted.

“Are you ready to fuck me, yet Daddy? Because I really want you to fuck me.”

And he did. With the same power and control and focus he’d showed all night. But sans the kilt.