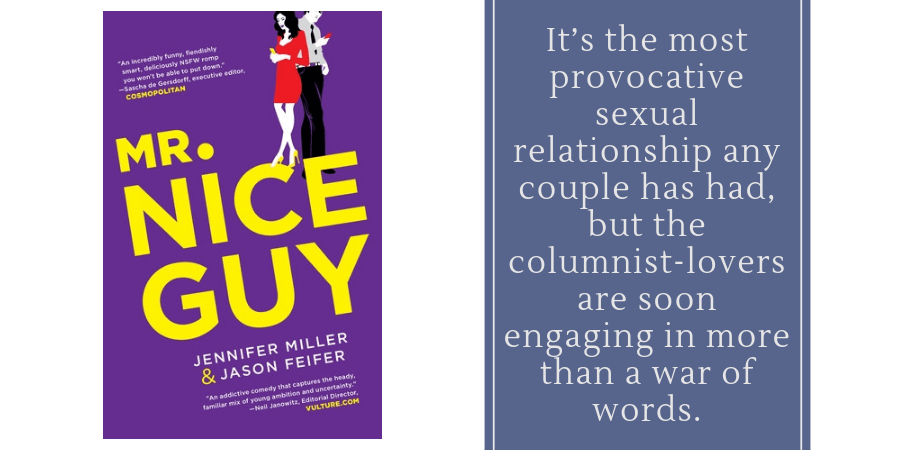 Far too long along, I was asked if I’d read Mr. Nice Guy, a contemporary novel by Jennifer Miller and Jason Feifer in exchange for an honest review. I said yes, and read the book fairly quickly, but I’m only just now getting to the review part. So let’s do this thing… 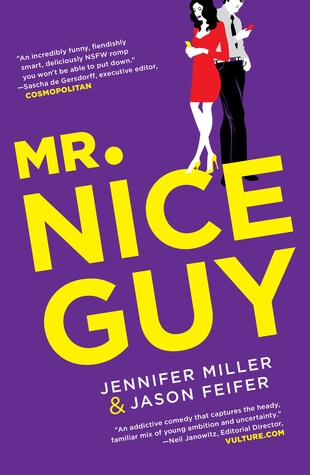 Lucas Callahan gave up his law degree, fiancée and small-town future for a shot at making it in the Big Apple. He snags an entry-level job at Empire magazine, believing it’s only a matter of time before he becomes a famous writer. And then late one night in a downtown bar he meets a gorgeous brunette who takes him home…

Carmen Kelly wanted to be a hard-hitting journalist, only to find herself cast in the role of Empire’s sex columnist thanks to the boys’ club mentality of Manhattan magazines. Her latest piece is about an unfortunate—and unsatisfying—encounter with an awkward and nerdy guy, who was nice enough to look at but horribly inexperienced in bed.

Lucas only discovers that he’s slept with the infamous Carmen Kelly—that is, his own magazine’s sex columnist!—when he reads her printed take-down. Humiliated and furious, he pens a rebuttal and signs it, “Nice Guy.” Empire publishes it, and the pair of columns go viral. Readers demand more. So the magazine makes an arrangement: Each week, Carmen and Lucas will sleep together… and write dueling accounts of their sexual exploits.

It’s the most provocative sexual relationship any couple has had, but the columnist-lovers are soon engaging in more than a war of words: They become seduced by the city’s rich and powerful, tempted by fame, and more attracted to each other than they’re willing to admit. In the end, they will have to choose between ambition, love, and the consequences of total honesty.

I’ll be honest…contemporary novels aren’t something I read a lot of. I prefer historical fiction, fantasy, science fiction, and nonfiction. But I was intrigued by the premise of this book. It’s not often that a work of fiction focuses on people writing about sex for a living, and I wanted to see how the authors handled it.

Let’s start with this…it was not a completely awful book or poorly written. For a light read (the books I like to call brain candy), it wasn’t bad. Unfortunately, it also wasn’t memorable. This book is billed as a comedy, and I really don’t remember laughing much.

The big sell on this book is that they’re writing about their sex lives, and it gets real. Uh-huh. Eh, I’m a sex blogger who puts pictures of her vulva on the internet. I think I have a handle on what “real” means. Reading a vicious takedown of a less-than-stellar sexual encounter doesn’t get my juices flowing. Especially when the initial response from “Nice Guy” was a bit on the whiny side.

I kind of hated the idea that Carmen “couldn’t be a journalist” so “settled” for writing about sex. I’m sure that happens, and I have no doubt the male-dominated power structure kept her down. But settling for writing about sex didn’t endear me to anyone. Even if it wasn’t a first career choice, it’s a legitimate way to make a living and be a writer (although I’m clearly not objective on this point).

There’s a small subplot that involves kink and power exchange that could have been really interesting to explore, but it primarily focused on manipulation and regret. I was ready for more and was disappointed when it was used as another way to show that the bad guy (who was evil) was weird, creepy, and had “issues.”

The book is set in New York City and in the world of media and journalism. The real themes of the story — how the media manipulates perceptions of reality, the greed of big businesses and the people who run them, and moving out of small towns to re-invent yourself  in a big city were actually interesting. As someone who’s never lived or worked in this world, there were times I thought, “I hope this doesn’t actually happen in real life. Also, this is fascinating!”

But the sex writing and the way their “sexual encounters” (such as they were) occurred through the book? They could have been dueling food or travel writers for all I cared. There’s are moments when we see that some of the sex writing has been faked, and I think that pissed me off most of all. As a nonfiction sex blogger, I hated the assumptions (within the book and elsewhere) that “everyone” fakes their sexual escapades in writing. I’m realistic enough to know that some people do, but it didn’t endear me to the characters.

So…should you read it? If you’re looking for a light read that’s mostly about two people figuring out how to stop being shitty to each other, it’s not awful. But if you’re hoping for a book that says something interesting about sex or writing about sex, you might be disappointed.

If you want to learn more about Mr. Nice Guy, check it out on Goodreads or Amazon.