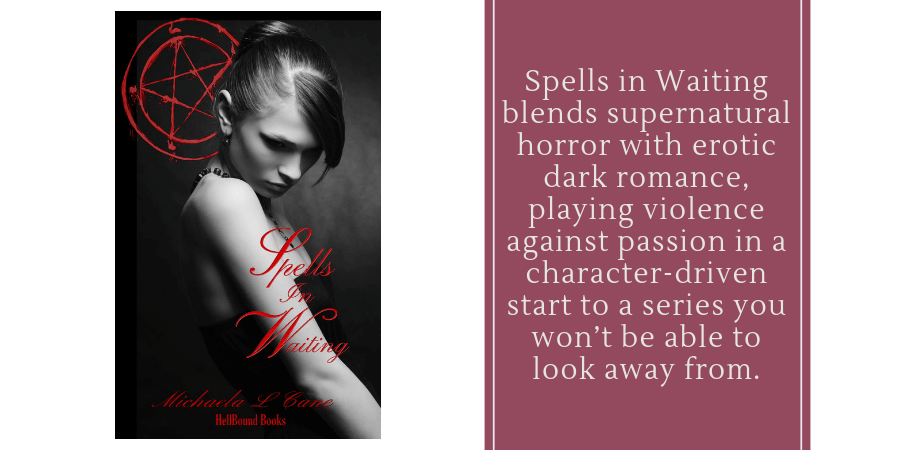 I’m officially bringing back Shameless Promotions — where I pimp out smutty authors with newly or kind of recently published books. Because if you’re the type of person who reads the smut I produce, I imagine you’re the type of person who reads in general and enjoys smut. With so many books being published all the time, it’s hard to know where to begin. This week, a big welcome to Michaela L. Cane and her first novel, Spells in Waiting!

About Spells in Waiting 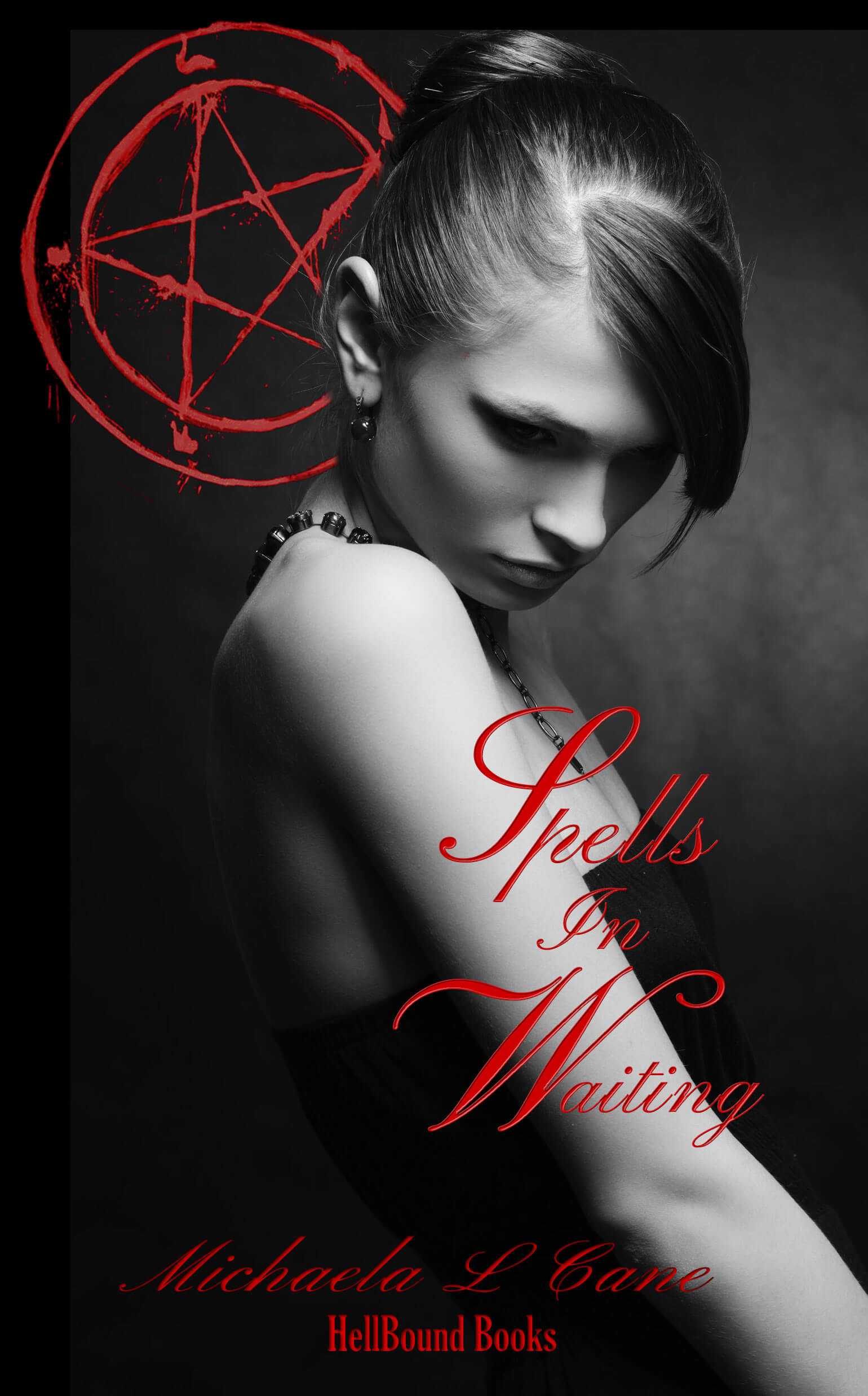 For as long as she can remember, Lauren Merriweather has fought to separate herself from her mother by focusing on school and developing her healing powers.  Like her mother, she’s a natural-born witch, but unlike her mother, Lauren is not a killer driven by hatred.

But, when a fight with her rampaging mother drives Lauren to seek relief in alcohol and mindless flirting, her world is twisted violently out of her control.

Lauren’s attraction to David is as immediate as it is undeniable – to the extent that she forgets about the spells that have, until now, kept her from getting close to a man.  But David Fredricks is the government operative investigating her mother for murder, and he and his partner have determined that Lauren is their best lead.

As far as David is concerned, Lauren and her mother are both witches, and that makes them little better than monsters.  Lauren’s allure doesn’t change the fact that her mother is a vicious serial killer, and he’s prepared to do whatever it takes to stop her.

When an interrogation goes too far, Lauren finds herself bound to David in a way that neither of them could ever have imagined – and her very survival depends on her trusting the same people who have stolen her identity.

Excerpt from Spells in Waiting

“I don’t want you to sleep on your couch, David,” she answered, and he didn’t hear any hesitation in her voice.  Instead, he just heard the same want he’d heard the night before, when he’d allowed himself to think for a minute that this was where they were heading.

Swallowing down the voice that told him this was a mistake, he lifted one arm and moved it to the breast grazing his abdomen, cupping it with his hand and hefting it, playing gently with the hard nipple he could feel through her tank so that she gasped at his touch, but leaned further into him, encouraging him.  “This is what you want, Lauren?” he asked quietly.  “You’re sure?”

When she said, “And more,” he squeezed the breast in his hand and shifted, bringing his other arm out from where it had rested beneath his pillow.  He moved slowly then, rising onto his side and finding her face with one hand, guiding her to his in the dark.  She opened her lips on contact, her mouth letting his tongue slip inside and then pull back so that he could suck her lips between his own one by one, listening to her moan soft encouragement.  His hand still on her breast as he kissed her, he gently pushed her backward so that she was on her back and he could straddle her.

Lauren lay back beneath him, her hands holding onto David’s ribs for purchase on the moment. In the pitch black, her blood was burning, pleading for this man to be even closer, inside of her, and she felt more alive suddenly than she’d felt in weeks.  Kissing him, she could almost imagine the spell heating her blood was her own magic, and not just what was left of her mother’s spells, begging for release.  She pulled his tongue into her mouth, holding him there as she felt his hands cupping and squeezing her breasts, his rough fingers twisting around her nipples.

Pulling up, David let go of her and moved his hands to the bottom rim of her tank.  He left his hands there, touching skin and fabric and waiting for just a moment, giving her time to protest before he went ahead and skimmed it off of her so that they both now only wore the pants they’d gone to bed in.  He ran his hands up her abdomen, along her sides, feeling her body shiver beneath him.  When he heard a little mew of need, he lowered himself to one of her breasts and sucked the nipple into his mouth, playing with the hard bud with his tongue and teeth, remaining gentle but insistent as one of his hands found her other breast and his other reached around her to slip into her sweatpants and hold onto her ass, gripping her and sandwiching her body between his hand and his hard dick, pressing into her thigh.

Lauren let out a whimper as David’s teeth came down lightly again, sending another spike of need running through her blood.  One of her hands was in his hair now, holding onto him, her other on one of his forearms, running up and down his muscles.  His hand on her ass was only a reminder of what she wanted, and she arched into him, hearing him groan in response just before she lifted her hips beneath him, pressing her body harder against his.  He was holding his weight above her, keeping himself from pressing down into her with all of his bodyweight, and that meant there was too much space between them, so far as she was concerned.

David slid up her body, his lips landing at the base of her neck.  “I want you,” he told her, only half-listening for the response.  Everything he needed to hear from her was being broadcast clearly, in every mew of need and whimper of response coming from her lips, and every tremble that was running through her body at his touch, her hands exploring all of the skin of his body that they could reach as he kissed her, wanting to make sure that she remembered this for all of the right reasons, and knowing he had a fair bit to make up for.

Like the excerpt? Buy Spells in Waiting on Amazon!

*Spells in Waiting is available in print and ebook form, as well as on Kindle Unlimited

Michaela L. Cane lives and writes in southwest Florida, where she works as a full-time book editor specializing in horror, dark romance, suspense, fantasy, and anything at all involving the paranormal.  Her own writing always takes dark turns, but tends toward character-driven stories which blur genre lines and ask the questions that she believes we sometimes even hide from ourselves.  Spells in Waiting is her first full-length published novel, and she jokes that she didn’t mean to write it… but, in the end, it demanded to be written, and its sequel is now complete and ‘coming soon’ since the characters in the book aren’t people she’s quite found a way to walk away from just yet.

If you’re a smutty writer with a book to promote, you can request a Shameless Promotion, too! Click here to learn how.