The Zumio (received in exchange for an honest review) sat on my dresser, silently judging me for several months. I received it just after Eroticon and am only now telling you about it which gives me all the guilty feelings.

Part of the reason, though, is because Zumio intimidated the fuck out of me. A teeny-tiny swirling (not vibrating) tip that packs a punch made my clit want to go into hiding. I was convinced there was no way this would work for me. But after speaking to a rep during Eroticon, who gave me tips on how to play with it, I was willing to try.

I charged it two days before I used it. Never before has a sex toy intimidated me quite this much. It’s beautiful but a little overwhelming, too.

When I finally got naked and decided this was the moment, I was tentative with myself. The tip is so small, the circular motion so powerful, and my clitoris so fucking sensitive. But I remembered the advice.

“Avoid direct stimulation. Touch other parts of your vulva. Stimulate your clitoral hood. Try other body parts like your nipples.”

So that’s what I did.

And I found the spot. Laying the long, thin edge (the part that connects the wildly swirling tip with the rest) against my clitoris and pressing down felt damn fucking good. My toes curled, and my cunt clenched.

Multiple times I thought I was about to orgasm. A few times I felt strong muscle spasms through my body. But none of the relief of a climax. Whatever I felt might be the definition of anti-climactic. There was the build, the need seeping through every pore, the top of the crescendo just before the crash….

Then nothing. Nada. Zip. Zilch.

Nope. It was over and not to be.

I’ve never been one to get emotionally attached to a sex toy review, but damn it. I really wanted this one to work for me. It’s PURPLE, for crying out loud. But no.

The Zumio built up a need but didn’t deliver. The ache between my thighs was unbearable.

I started grabbing other sex toys — the Pink B.O.B., my Queen Bee, even some cheap vibrators I hadn’t filed away (put in a box under the bed to be forgotten). Either they didn’t work (looking at you cheap vibes) or the batteries ran out just as things started getting good. Waaaaahhhhhh!

Thankfully, John Brownstone swooped in to save the day. A few quick touches and all of the heat he brings to every encounter, and I felt much better. 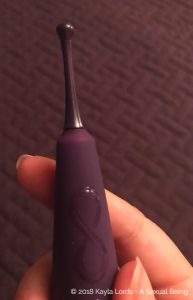 If you apply zero pressure when putting it against your body, it’s a very tingly, buzzy sensation. When you press down, it becomes a deeper vibration that sinks into your muscles. I enjoyed the latter more than the former, but was disappointed that it made me feel good but wasn’t enough to get me off. Yes, I know, an orgasm shouldn’t be a requirement, but if I’m using a sex toy, that’s my expectation.

We tried stimulating my nipples, his cock and balls, and other bits and pieces. Nothing felt right. I know other people love Zumio, so this is just one of those moments that proves not all toys work for everyone.

What you should know…

It didn’t do anything for me, but that doesn’t mean you might not like it. Learn more about Zumio or find a retailer.