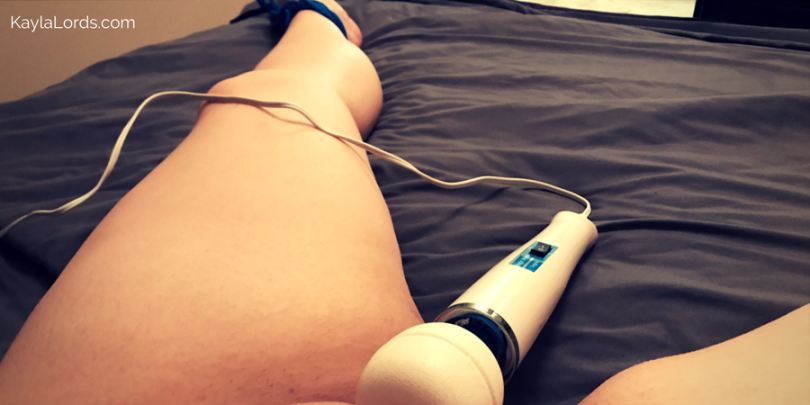 I mumbled the words from a post-orgasmic fog. My body was simultaneously boneless and sore. Muscles ached. My cunt still buzzed from the Magic Wand. Tremors shuddered through my torso every few seconds. But damn it, I wanted to commemorate the event, share it, celebrate it.

For a solid week, we’d gotten closer to our old D/s selves. I asked permission before eating certain foods. He looked over a progress chart I’d made to track water consumption and workouts. It wasn’t perfect, but it was good. We were each getting what we needed from the Dominance and submission side of things (because we’re always Daddy and babygirl these days).

And I’d earned a reward. My week was filled with stickers marking my progress, and at the end of seven days I’d earned a Hello Kitty sticker in my chart and a kinky fuckery prize. He’d given me choices – a bare handed spanking, his tongue on my clit, or the hitachi and bondage. When I couldn’t decide (because really, they all sounded wonderful), he let Twitter choose. You chose well, Twitter. You really, really did.

Each ankle was tied to a corner of the bed. The blue was so vibrant it hurt my eyes, and yet I couldn’t stop staring. We moved the pillows so they were comfortably behind my head. I nestled into the towel under my hips. He turned on the wand, testing it and the attachment that lets him better control the settings (instead of just two settings: low and holy-fucking-shit). The sound inspires a Pavlovian response – I’m immediately wet and also nervous. Can I handle it? Will it feel as good as I remember?

“You ready, babygirl?” I squeaked out some response in the affirmative. “How many orgasms do you think you’ll have tonight? Want to break the record?”

He was gentle with me. Coaxing out the pleasure with a gentle rolling of the wand’s wide head over my vulva before settling on my clitoris. I always expect him to ram it against my body. Even though he almost never does. He was much more patient about it. Maybe because we realized it was a long way to (possibly) 14 orgasms.

As always once the first one finally arrived, the second, third, and even fourth rolled through in waves. Warm fluid squirted from between my thighs. Not the hitachi-drowning amount of a bygone time, but enough. The next few rolled up my inner thighs and met at the juncture of my cunt, sending shockwaves through me.

In my multi-orgasmic experience (since it’s the only one I know), there comes a point when I could stop and it would be okay. My body is spent, and I’ve received pleasure I can’t even describe. But I don’t. I want more wrung from my body, even though from that point on, each climax requires more force and pressure. Bring it on.

Gone was gentle rolling of the vibrating head. It was all about the right angle against my clit and the amount of pressure applied. Each orgasm was a screaming one, ripped out with such force, I imagined it hitting the wall with a sticky splat. My legs were tied open, but I had enough give that I could close my thighs.

The last orgasm required a hand over my mouth to muffle some of the noise. I sat straight up, thighs still clamped over the hitachi, pulling the vibrations closer to my poor exhausted cunt. My ankles strained at the rope. My eyes were open, but I saw nothing. I can’t take it. I can’t take it. Ican’ttakeit!

“No more!” Did I shriek and scream or was it only in my head? I don’t know.

“Okay, babygirl. It’s okay. Just breathe.” I always feel like he’s gentling a wild animal in these moments. Maybe he is. “Are you okay?”

That’s when I mumbled my request for photographic proof. My reward for a week well done now felt like a battle I’d won. A battle I’d fight any day, happily. Later, we’d joke and giggle, marveling at the rope marks on my ankles. Right then, I only had one other thing on my mind…

“When can I earn another reward, Daddy?”