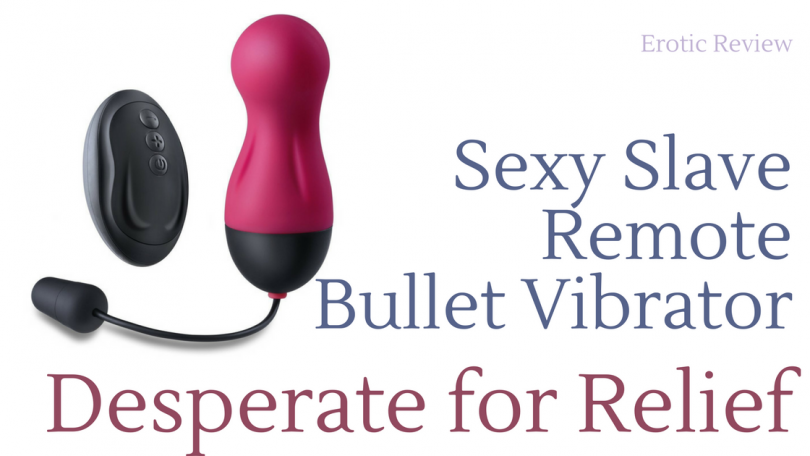 “Which do you want to do first? Test the new toy or record the podcast?”

I was a little at my wit’s end, so I didn’t really care which one he chose. Just please don’t make me decide.

Uhhhh, that wasn’t what I expected at all.

“Both?!” I’m sure my voice squeaked. Wouldn’t yours? “Please not while we’re actually doing the show? I want to sound like I’m kind of professional!”

I could already imagine how distracted I’d be as I tried to make a Very Serious Point while the inside of my pussy was pulsing and throbbing thanks to, what I hoped was, a very nice vibrating egg (received in exchange for an honest review). Of course he wanted to try it out – the damn thing has a remote!!

He pointed the remote at my crotch. Nothing. He tried again. Still nothing? It took us a minute but finally…

“Did the receiver shut off?”

I pulled the egg out of my pussy, turned it around, and sure enough. It had timed out. It was slick and slippery with lube as I found the button. I put it back in my body, pushing it deep so only the cord stuck out. He tried again.

I squeaked and jumped. That was much better. He turned it off after a minute or two of playing with the remote.  I was pleasantly warm, although a little uncertain about sitting down with the egg tucked inside. Other inserted toys are usually a little painful – I’m looking at you, ben wa balls.

We teased about the toy at the top of the episode. And then I promptly forgot it was there.

Until the very end, just as we closed the regular part of the episode with our usual, “Keep it kinky, y’all!” as I was distracted, he pointed the remote at me, and I jumped again. I may have squeaked or moaned – we’ll have to listen to the show to know for sure.

Within minutes, I felt good. No looming orgasm threatened, which is always disappointing to this impatient babygirl. I want my orgasm and I want it now! (Yes, I probably stamped my foot, too.)

He’s right. This toy is meant to tease and titillate. To warm me up. We wore it through to the very end of the show. As the vibrations and pulses worked their way from my pelvis to every other part of my body, I began to lose my train of thought. The last few minutes of the show are probably very scattered.

We finished up, ready to do our (not really) fancy editing. I didn’t know if I wanted the egg to stay in or to come out. It felt so good but it only kept me on edge.

“You’ll wear it until we get the show uploaded.”

He went outside, and I sat at the computer finishing up. I picked up the remote and switched the pulses. I sat forward in my chair, rocking my pelvis against the seat. Fuck it felt good. It was almost soothing. Like a massage for my cunt. I knew I was swollen and ready for the slightest touch to my clit.

It was either a joke from the Universe or a blessing that we ran into technical problems. John Brownstone thought I’d wear the egg for an extra 15 minutes, and it wound up being an extra 30 minutes. I didn’t mind. Really, fuuuuuuuck, I didn’t mind.

“Let’s get in the shower, Daddy. Pleeeeease!” He smirked. He knew I wasn’t interested in washing my hair.

Once we were both in, I grabbed his hand and put it over my now empty but still pulsating pussy. He laughed – and obliged.

I buried my face in his arm as fluids poured down my leg. I don’t remember his touch. Was he harsh or gentle? I don’t know. All I remember is the relief of finally getting to come. It felt so fucking good.

Yes, I had to get over my impatience with wanting the toy to cause an orgasm. Once I did, it was soothing – even as it teased. Call it a slow burn, I guess. The longer it stayed in my body and pulsed, throbbed, and vibrated, the more my desire built. Without stimulation to my clit, I was never going to come from it, but as a toy that can be used in power exchange, that’s probably a good thing. And truly, the bullet is meant to be a tease which means it did it’s job.

We talked afterwards, and we would definitely take this one out to play in public. It’s quiet and the remote is really discreet. Unless you’re looking, you can’t see it in someone’s hand if they don’t want you to. And you don’t have to point it directly at your partner’s crotch to make it work. The remote works up to 40 feet away. John Brownstone’s only complaint was that he couldn’t tell what setting it was on so he was flying a little blind.

The vibrating bullet egg is waterproof and rechargeable. It’s extremely affordable ($16.99 on Amazon as of the publication date).

Interested? Check it out on Amazon and use code XZUP8GOG to save 40 percent off through 9/30/17.