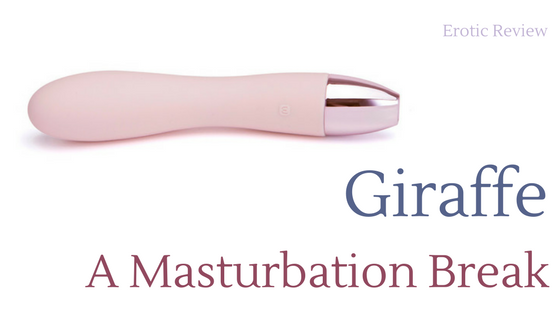 No matter what you might think, these aren’t normal conversations for us. But now that John Brownstone works from home, opportunities like this ought to be taken as often as possible.

The Giraffe by IMTOY (received in exchange for an honest review) had been sitting on the nightstand for weeks. Between website troubles and our own personal upheavals, playing had been put on the backburner. No more. I needed orgasms…and him.

He wasn’t ready when I was. Even after I flashed my boobs at him, lingering long enough for him to suck and nip at one. I turned on my heel, casually throwing a “I’ll get started and you can join me when you’re ready” over my shoulder.

The first setting was mild, but it felt good. My thighs parted. I placed the widest part against my clit, keeping my finger over the button. Not bad, not bad. Next?

Another setting. Better than the first. My body clenched, my back arching off the bed, heels digging in. And that was before he placed a hot mouth over my nipple, sucking and nibbling. I hissed between my teeth, terrified to make too much noise.

The first orgasm lapped over me, not unlike his tongue. I felt hot fluid gush between my legs. Next setting. More of the same, except now his hands moved across my skin, blazing a searing trail. In between presses of the button, pulse changes, and bone-wracking orgasms, I felt him.

Tweaking and pinching nipples. Licking my neck. Tongue in my ear.

Back at it, I wanted more. I didn’t realize how long it had been since I’d had the big orgasms, the gushy ones, my favorite ones. But once I had the first, I wanted more. The vibe rattled against the fluid pooled in my slit, making an all-too familiar sound of vibrations meeting liquid. Again and again I pressed the button. Small pulse settings let me rest. Steady streams of sensations sent spasms rolling from the one end of my body to the next.

The towel under my ass was soaked. So was the bed. So was I.

One hand gripped my hair in a cruel vice. I wanted to scream in pain. Small climaxes rippled through my cunt. He grunted in satisfaction as I clamped down over his cock.

About the Giraffe by IMTOY 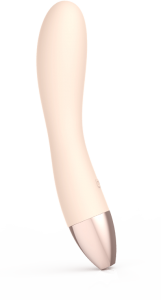 It retails for $79.99 through the IMTOY website and shipping is free in the U.S. and $10 for international shipping (as of the publication date).

I’m definitely keeping the Giraffe in the nightstand.

Check out the Giraffe and the entire Zoo Collection!